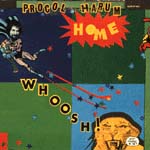 As I lay down dying, a floor for my bed
And a bundle of newspaper under my head
I dreamed a dream, as strange as could be
Concerning myself, and somebody like me

We were in some city, the stranger and me
The houses were open, and the streets empty
The windows were bare, and the pavements dirty
I asked where I was; my companion ignored me

We entered a graveyard and searched for a tombstone
The graves were disturbed, and the coffins wide open
And the coprses were rotten, yet each one was living
Their eyes were alive with maggots crawling

I cried out in fear, but my voice had left me
My legs were deformed, yet I moved quite freely
My head was on fire, yet my hands were icy
And everywhere light, yet darkness engulfed me

I managed to scream and woke from my slumber
I thought of my dream and lay there and wondered
Where had I been? What could it mean?
It was dark in the deathroom as I slithered under


Nothing that I Didn't Know

Did you hear what happened to Jenny Droe?
Couldn't believe it, but it's true
Twenty-six, and now she's dead
I wish that I could've died instead

Did you hear what happened to Jenny Droe?
Did you see how thin and pale she grew?
So much suffering, could not hide
Endless heartache until she died

Did you hear what happened to Jenny Droe?
Couldn't believe it, but it's true
Twenty-six, and now she's dead
I wish that I could've died instead

I'll bathe my eyes in a river of salt
I'll grow myself right up to the sky
I'll sing in the forest, tear down the trees
I'll foul all the fountains and trample the leaves
I'll blacken your Christmas and piss on your door
You'll cry out for mercy, but still there'll be more

I'll put a blight in the orchard
I'll run wild through the fields
I'll waylay your daughter and kidnap your wife
Savage her sexless and burn out her eyes
I'll blacken your Christmas and piss on your door
You'll cry out for mercy, but still there'll be more

Pailing well after sixteen days, a mammoth task was set
Sack the town, and rob the tower, and steal the alphabet
Close the door and bar the gate, but keep the windows clean
God's alive inside a movie! Watch the silver screen!

Rum was served to all the traitors; pygmies held themselves in check
Bloodhounds nosed around the houses, down dark alleys sailors crept
Six bells struck, the pot was boiling - soup spilled out on passers-by
Angels mumbled incantations, closely watched by God on high

Lightning struck out - fire and brimstone! Boiling oil and shrieking steam!
Darkness struck with molten fury, flashbulbs glorified the scene
Not a man who had a finger, not a man who could be seen
Nothing called (not name nor number) - Echo stormed its final scream

Daybreak washed with sands of gladness, rotting all it rotted clean
Windows peeped out on their neighbors, inside fireside bedsides gleam
SHALIMAR, the trumpets chorused, angels wholly all shall take
Those alive will meet the prophets, those at peace shall see their wake

Went to the river, but I could not swim
Knew I'd drown if I went in
Lost my faith in a terrible race
Rest-in-peace hereafter

Warning about copyright Words from other Procol Harum albums