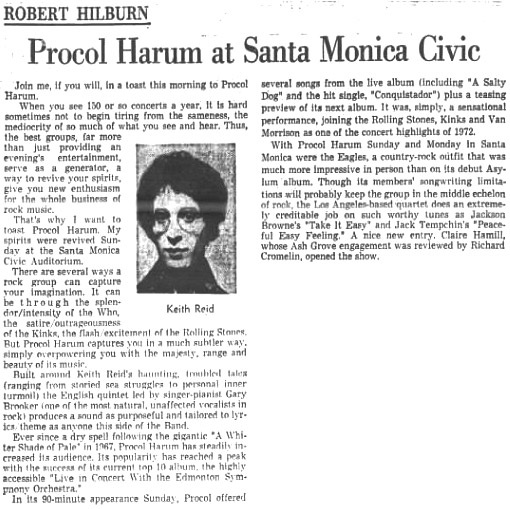 Join me, if you will, in a toast this morning to Procol Harum.

When you see 150 or so concerts a year, it is hard sometimes not to begin tiring from the sameness, the mediocrity of so much of what you see and hear. Thus, the best groups, far more than just providing an evening's entertainment, serve as a generator, a way to revive your spirits, give you new enthusiasm for the whole business of rock music.

That's why I want to toast Procol Harum. My spirits were revived Sunday at the Santa Monica Civic Auditorium. There are several ways a rock group can capture your imagination. It can be through the splendor/intensity of The Who, the satire/outrageousness of The Kinks, the flash/excitement of the Rolling Stones. But Procol Harum captures you in a much subtler way, simply overpowering you with the majesty, range and beauty of its music.

Built around Keith Reid's haunting, troubled tales (ranging from storied sea struggles to personal inner turmoil) the English quintet led by singer-pianist Gary Brooker (one of the most natural, unaffected vocalists in rock) produces a sound as purposeful and tailored to lyrics/theme as anyone this side of The Band.

Ever since a dry spell following the gigantic A Whiter Shade of Pale in 1967, Procol Harum has steadily increased its audience. Its popularity has reached a peak with the success of its current Top 10 album, the highly accessible Live in Concert with the Edmonton Symphony Orchestra.

In its 90-minute appearance on Sunday, Procol offered several songs from the live album (including A Salty Dog and the hit single Conquistador) plus a teasing preview of its next album. It was, simply, a sensational performance, joining the Rolling Stones, and Van Morrison as one of the concert highlights of 1972.

With Procol Harum Sunday and Monday in Santa Monica was The Eagles, a country-rock outfit that was much more impressive in person than on its début Asylum album. Though its members’ songwriting limitations will probably keep the group in the middle echelon of rock, the Los Angeles-based quartet does an extremely creditable job on such worthy tunes as Jackson Browne's Take It Easy and Jack Tempchin’s Peaceful Easy Feeling. A nice new entry, Clare Hammill, whose Ash Grove engagement was reviewed by Richard Cromelin, opened the show.