And the Guitar Orchestra

Roland Clare talked to Mick Grabham in October 1998 about the Guitar Orchestra CD:

RC
Can I start with a highly specific question: did you work out the Elgar from the score?

MG
We worked it out from the score, yes.

And what lay behind the choice of that particular piece? I don't suppose it was patriotic sentiment ...

Nothing like that. As a harmonic ... something that the guitars could play, it seems right ... y'know ...

Some would say it was a strange choice, in view of the huge amount of sustain you need. Would you ever have been able to play that live?

I would hate someone to come up and ask me to play it now, that's for sure!

I heard you do something similar with the Albinoni with Procol Harum at University College, London: afterwards, you said you had ankle-ache from the volume pedal: it must have been just after you recorded the track.

That's a good 'un; but that's a good deal slower than Land of Hope and Glory. It sounds quite ... when I listen to it now I think, 'Oh my God, what possessed us to do that ... why didn't we do something a bit more mainstream'; but, at the same time, it was just for the crack of doing it: there was no big grandiose intent there.

How long did it take you to do it?

It took us a little while, but not aeons ... it took us a while but it didn't take that long really. I mean the band played it ... obviously we did it in sections, I can't pretend that we did it without any edits, but we did actually play it. We did build the guitars up: but what I'm saying is the basic band, bass, drums and the two guitars did play it all to start with. At the time there weren't that many people doing that kind of thing: there was Wishbone Ash, and there was Hendrix's version of Star Spangled Banner ...

The thing that it reminded me of was a version of Amazing Grace ...

Ah yes, The Great Awakening! I have the record!

I found it in a second-hand record-shop in Cambridge ...

I used to hear John Peel playing that ...

I remember John Peel ... that's where I heard it! And I remember him intimating that it was something to do with the Grateful Dead or Jerry Garcia.

It was anonymous, though, wasn't it? Someone who had dropped into a studio, done it and pushed off again?

It was the only time I ever heard of a Grateful Dead connection: not that that was the reason I liked it, but ...

Was that in your mind when you were doing this, do you think?

If it was, it was subconscious. As everything else would be.

You must have been gobsmacked when you couldn't get clearance from the Elgar people to put it out, even if, as you say, there was no Grand Scheme ... It turned out so nice and it must have felt a real shame not to be able to share it.

How soon after that did you get the Procol Harum 'phone-call?

Did Gary and people like that know you'd done the Elgar? Was that part of your appeal to them?

They didn't know any of my work, I don't think.

Not as far as I know. They might have heard of Cochise, but I don't know.

So it was on the strength of a personal recommendation, then.

It was Doug D'Arcy at Chrysalis Records. But I don't know how well he knew my playing, or even if he knew it at all, other than a friend of mine was always telling him how good I was (laughs).

Your solo composition on Guitar Orchestra, Solomon's Seal, is the only other one on the record that does anything much other than folky-bluesy chords: I wondered whether that was something you felt at home with, sliding from diminished chord to diminished chord ...

I always felt at home with that kind of thing: I don't know why, I've always had an interest in that sort of direction.

You didn't get much of that in Cochise.

I've always had interests in all sorts of other directions as well, you see. It's whatever suits whatever situation.

What's your musical background, then? Obviously you read ...

I don't really read! I mean I can sit down and work out what it is. But I can't pick up a piece of music and <snap> read it just like that.

Did you start on guitar, violin, or piano?

You must have been a Shadows fan?

I was at the time!

You can hear that in the solo guitar on the Elgar. Can you remember who plays what?

The spikier sounds are Ray Fenwick, the thicker sounds are me, generally speaking. On lots of the harmony parts you'd never really tell because it's a conglomeration.

The main solo tune, the Land of Hope and Glory melody ...

That's me. I have to say that, for the most part, the only Guitar Orchestra track is the Elgar; if I have to be absolutely honest the rest was just toshed together, bits of this, bits of that ... we happened to make a couple of songs out of a couple of bits but the rest is ... just as you say ... a few chords slung together. It was just us having fun in the studio, really.

Ghost Town is an evolved song, isn't it? And Misguided Woman is a good belter.

I notice there's more material on this CD than you could have fitted on a vinyl LP at the time. Did you pull more out here than you planned to use at the time?

Now what did we do? Let's see ... there's a couple on there that have been extended, digitally. There's one on there ... I can't remember half the titles ... but there's one that had a melody bit that just happened at the beginning of the song, and the rest was just a guitar instrumental in A, a hack-around really, nothing much happening: and we digitally put the melody bit in again, which lengthened it.

So that never would have been on the original album?

The track itself would, but not in that form.

Did any of these pieces which turned out as instrumentals plan to have words added?

They may ... some of them may have, but probably not for the most part, no.

And the Fenwick / Grabham credit, how does that pan out? Just sitting together hacking things about?

Yeah, we worked all kinds of things out like that.

You know I hadn't seen Ray for years and years then I bumped into him again at some guitar show or something, quite a while ago now even, and that sort of re-bubbled the ... you know, the bubble formed again of trying to do something with this, and specially with the Elgar fifty year ... coming out of copyright ...

I don't want to seem impudent but I guess there's not much money in it!

Oh there's none, nothing at all. Absolutely. It's just that ... well, we spent all that time doing it, and it never came out. So now it has, for what it's worth.

And the cover-picture, that was done quite recently, I imagine.

That was done, yes, a few months before the CD came out.

So you'd increased your guitar collection by then!

[Laughs] They're not all mine, you know!

Have you got a favourite guitar?

Depends on what I need it for really. My favourite guitar is a Japanese one, a Tokai copy of the original Flying V: and it's the one I play most.

I never saw you play a Flying V in a Procol Harum setting!

Is that the one in the picture, with a white scratch-plate? 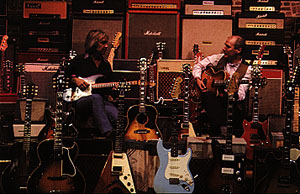 Probably is. It's Japanese, but it's the best Gibson I've ever had. I have done a lot of work on it, it's not as it would have come. They've stopped doing this copy: I always had a thing about the early Flying V, the kind of Albert King model, and ... who did Memphis as an instrumental? That's going to bug the shit out of me!

Have you got favourite guitar players?

Recent? Not older ones? Have I? I probably have. Damned if I can think of any.

The little linking-pieces. Was there any conception behind those except that they were fun to do, and they broke up the more beaty, bashy numbers?

So this really confirms the impression that it's a bunch of blokes having a lot of fun!