, 3 July 1976
Frankie Miller's a nice fella, a bit of a teddy bear really. Like he tries to stick to the story that he got his beat-up hat off a dead man in Chicago, and that the hole in it is a bullet hole, but he can't keep it up and finally confesses he won it.

I thought he was supposed to be some kind of a heavy, hard-drinking wild man, and I tend to find Glaswegians intimidating anyway, probably because I can't understand half of what they say - and that makes me edgy. 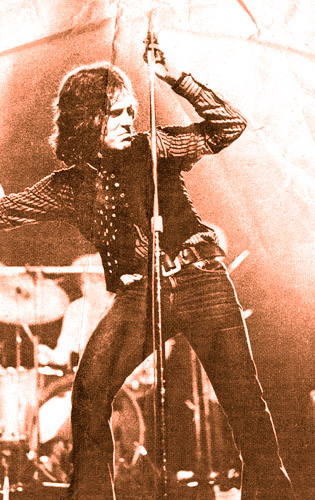 But there he was, drenched in sweat after a sound-check under hot lights on an already-scorching afternoon, so pooped he wasn't sure where he'd played the night before, and still polite enough to do an interview arranged at the eleventh hour when all he probably wanted to do was flake out before his first really major London concert, headlining at the Victoria Palace.

Miller has been around a good while, and the ups and downs of the bands he's been in and the people he's worked with have all been detailed before. But this current tour is the best opportunity he's had in this country to strut his stuff and demonstrate what the critics were on about when they raved over his album, The Rock, last autumn.

The tour's just been extended for a few more weeks, including a spot at the prestigious Montreaux [sic] Festival. "I've been very happy - it's working out great. This is the freshest band I've ever been in. It's like starting again you know, like being a 14-year-old. There's a good mood in the band."

After the tour's finished, or possibly even before, Miller and his Full House will start on the next album, with Russ Ballard as likely producer. "I've got bags of material which we've no even had the chance to rehairse. We've done a couple of things, like Down The Honky Tonk and The Doodle Song, but they're the only two that we've so far had a chance to put in. I'm well open for other material, but it's got to be good and I've got to be able to sing it better than the person that has sung it before. Well, I've got the feel as if I sing it better."

In his set, he does numbers by Dylan and Randy Newman. What other writers' material does he see himself covering? "There's a lot of Stax stuff which I could do, but you canna really add much to Stax. I would never sing an Otis Redding song, nor a Wilson Pickett. Well I have done, sung a few Wilson Picketts, but there's certain singers I would just never even ... like Ray Charles. I'd never do a number by him because he's done it, and if he's done it it's gotta be the best singing that's ever been. I've never heard anybody better a Ray Charles thing. Never."

The reviews for The Rock were mostly ecstatic, but one critic wrote that Miller was too much like Otis Redding. How did he take that?

"With a pinch of salt. I don't care who they say I'm like. I know where I'm coming from, and they've been putting labels to people for years. I'd rather be put up to, say, Otis Redding than Wally Morgan from around the corner, if you know what I mean. I mean Otis Redding's a great singer, it's quite a compliment. I could do without that compliment 'cause I never go out of my way to be like him. I've been influenced by him, obviously, but I've also been influenced by Bobby Bland. There's a lot of people who say - specially in America - that I'm very much like Bobby Bland. But then again, that person that wrote the thing about Otis Redding probably never haird of Bobby Bland."

Who do you want to sing for? "People that respect music. I like singing to seated audiences too, 'cause they're there to see you and you've got more, uh, projection maybe, I don't know what the word would be. I just like singing for people that dig music. Like in America. If you're good they're going to tell you you're good, they'll let you know. They'll shout and tell you. I'd rather sing for them or an audience that shout and say you're rubbish than sing to a blasé audience. I'd rather a reaction. I don't mean in the sense of throwing bottles or anything", he added hastily.

"Singing's a spiritual thing, even in the studio. It's to reach a spiritual level which gets higher all the time, always has gotten higher with me. That sounds maybe a bit cheap, but I mean it very, very seriously. It's very dear to me you know.

"There's somethings that you do and like you nearly pass out, you know? And that's good. That's why I love singing. And if you reach that connection, I think it will connect with the audience. Well, it must if they want to listen, if they want to get into that kind of connection.

"When you think about it that's when you start losing the connection. You're never up there if you're thinking about it 'cause you're down here, feet on the ground."

"Once or twice in America, Winterland especially, I nearly passed out with the reaction. It was a bit frightening. I had to come down a wee bit, tell a few jokes."

This is probably very obvious, but have you felt frustration at the stop-go nature of your career? "No. Somebody asked me 'Do you ever feel bitter?' you know? I never feel bitter because things will always happen the way they're planned to happen and the way it's going right now is great.

"It's just that the right manager has now come along. There's never been anybody able to take a hold of me and say 'Get out and do it'."

"I was in a bit of a turmoil till Keith came along because there's been certain reputations floating about. People have said things about drinking habits - daft, silly things."

Is that all exaggerated then? "Ohhhh yeah! Very much so. I mean if you're going on every night and you're drinking like people say I do drink, I'd be a wreck. It canna be done, it just canna be done. There's a lot of stories, I don't know where they get them from."

I found this innocence a trifle suspicious. You project this image of being a Glaswegian toughie along with the hard drinking bit, I accused.

Well, there's certainly aggression in the way he comes across on stage.

"I met Keith at the Chrysalis office one day. I've always liked Procol. He'd heard High Life and commented he liked it. Then we had a few drinks together - just small ones, mind you," he qualified.

I don't know why I was surprised by this revelation of a spiritual, sober Frankie Miller, it's just that you rather infer that anyone who sings with that much fire must be an emotional volcano.

"Maybe it's because the place that I come from in Glasgow is a rough place. I was never aware of it till I came out of it. I go back because I love it ... I love the people there. It's very rough, but it's great. And maybe aggression for me is the idea that, instead of hitting somebody, you sing it and get it out. 'Cause you can get a lot of tension out by hitting somebody, or hitting a wall, or hitting your head off a wall. A lot of people throw things out of windows if they can afford it. To me that's something that you've got to get out of yourself. I get it out singing. Sometimes."

Okay, I'm convinced. Frankie Miller is spiritual, sober and sensitive. Anything else he'd like to reveal to the watching world. "Yes", he said instantly. "Who would I like to sleep with? Virginia Wade. Like her," he said with relish. "I'm not interested in watching tennis at all, but if Virginia Wade's on I'll watch. She's funky."

"No, no, I dinnae. Just Virginia Wade, she springs tae attaintion."