'Now it shines, the long-expected'

Various 'Palers' have written to ask us about the long-awaited Shine On Redhill Glossy Souvenir, what it consists of, whether it's worth getting. Obviously, in fairness to our friends at Shine On, Jens and I are not about to scan the whole thing and put it online; equally, as contributors to both text and pictures, we cannot be relied on for an entirely objective opinion as to its worth! 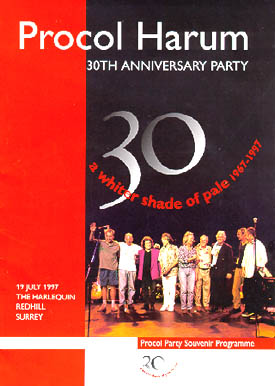 Here, nonetheless, are some impressions. It's a twenty-eight-page booklet on good A4 paper with still-heavier card cover, making thirty-two pages in all. The central eight pages contain black and white pictures, while the rest are in full colour. Graphic design, by Christine Ayre, is to the same exemplary standard that distinguished all the Redhill merchandise (Procol video box, Shine On archive, and so on); 'the glossy', as it has become known, has been carefully co-ordinated in terms of colour and typefaces, and clearly belongs to the same 'family': saddle-stitched with two wires, it will doubtless outlast the perfect-bound Shine On compendium.

Page one details the evening's personnel, offstage and on; it reprints a 1967 AWSoP article from Melody Maker; it shows the Harlequin party invitation: none of this material is available at 'Beyond the Pale'. It also summarises the film-show part of the event.

Pages two to nineteen present the text of BtP's widely-enjoyed 'This Old Cat' article illustrated by great numbers of photographs, of which some are familiar but many are not. The quality of reproduction is spot-on; further visual interest comes from side-bars and panels excerpting key phrases from the article, additional snippets about various fans - and a fax from Pete Solley. This attractive and varied three-column layout makes for much easier reading than a web-page does.

The next two pages showcase some offstage photographs, inset in Tito Davila's absorbing 'In Redhill 'Twas I' article; there follows a page of letters (contributors include Keith Reid, Mick Grabham, Kellogs and Pete Solley): most moving is the testimony of Tony O'Prey from Belfast, reflecting on the way 'Procol's vibes have helped us through the darkest times'.

Pages 23-25 catalogue the long relationship between Diane Rolph and the Procols, from her schoolgirl days as a Paramounts follower through to her crucial rôle as co-begetter of the whole Redhill extravaganza. It's witty, detailed, very personal, and not without its share of tragedy: a notable account, not available anywhere else.

Also previously unpublished, and building on Diane's final remarks about Barrie Wilson, is the final piece in 'the glossy', a moving account by Kenny White of his friendship with 'one who I am with no more'. 'Missing the Man, Remembering the Boy' is dedicated to the memory of BJ's parents, and adds a lot to the interview Kenny gave to 'Beyond the Pale' for our launch day in October 1997. It pictures Barrie in action at Parliament Hill Fields (a hitherto-unpublished picture) and is prefaced by a full-colour, full-face, full-page picture of the lamented hero in his youthful prime.

Considering that many of the photographs in 'the glossy' were sent in by fans after the official photographs miscarried, the standard throughout is amazing; Jens's photo-credit covers not only his own pictures but also many that were sent in by 'Palers' following the cry for help. Somehow it's the black and white photographs that carry the most authority, and of these the full-page portrait of Matthew Fisher at the battered B3 is outstanding. The Commander is shown at his piano, and there's a very nice full-length close-up of guitarists Grabham and Fisher in mid-Madness. (At the foot of this webpage you will find a complete summary of the programme's pictorial contents).

I can't imagine any other band's short-run fan-generated tribute coming near this in quality: it's destined to become a coveted rarity, one made by Procoholics for Procoholics. It will function as a wonderful souvenir for those who took part, and as a comprehensive consolation for those who could not. The price is certainly not low, but neither are the production values: it has not been made for profit, and the photographers, writers, compiler and designer have given their services for nothing, as the band did on the night.

Thanks to the wonders of the Internet, and the loyalty and kindness of our subscribers, 'Beyond the Pale' can report any Procol event almost instantly - witness our speedy Bourdon responses - and against that background a printed souvenir, almost a year after the event, might seem archaic. Yet there remains something delightful about owning a printed artefact: tactile, somewhat more individual, far more elegantly executed ... and easier to read in bed. Readers will notice that Christine has left the inside covers of the 'glossy' blank: Jens suggests that she wanted to end up with 30 printed pages, one for each year being celebrated; my guess is that she left us that space to collect autographs on, when the revived Procol Harum finally takes the new album on tour!