One of the Prodigal Strangers 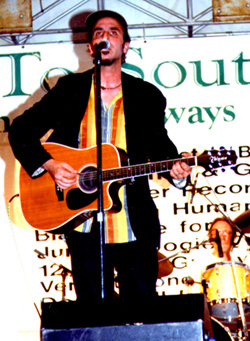 BtP asked Chris about his involvement with the record: what follows is digested from his various replies:

Yes I indeed did play on the Zoo release of Procol Harum Prodigal Stranger album. I played twelve string acoustic and sang backgrounds with Gary Brooker. I don't have the album in my hands at the moment, though I believe one of the songs was Hand that Rocks the Cradle. If that is the one that started with an acoustic strum figure?

Cradle has a full-band intro, in the published mix, but there's a very prominent 12-string strum figure, and great harmony vocals, particularly densely-layered in the chorus.

Yes I played the acoustic 12 on that song. I would have to look at the track titles to tell you the other.

See our webpage for track listing. There's also A Real Attitude / Into the Flood, and possibly quite a few others, that didn't make the final cut.

I also sang background on One More Time. It was a while ago, but I can tell you it was certainly an honour to get to hang with Keith and Gary, even play a pub gig with Matthew Fisher downstairs from the studio!

Were you a fan already, and how did you get involved? 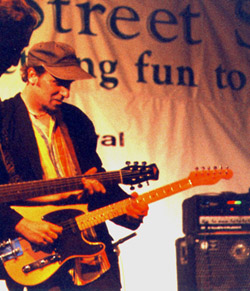 Yes I was. It was amazing being in the same studio with the artists who wrote Whiter Shade Of Pale as well as so many other incredible songs.

How I became involved in the record? I am a singer / songwriter if you are interested in my background. I was doing sessions with Procol Harum's co-producer Matt Noble on other projects of his, as well as doing recording of my own material at the Loft in Bronxville. I believe it was Keith Reid who asked me to play on their record.

Some say that the record started life as a Brooker solo album: I take it that it was a Procol Harum project by the time you joined the project?

Yes, it was a Procol album by the time I was involved.

And what music are you involved in now?

Have a listen to my music (MP3, Real Audio) here: my solo CD, Straight Answer In A Crooked Town, just came out and we are doing shows in the Northeast of the USA to promote its release.

BtP will be happy to review the album for this page ...