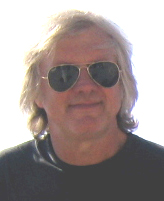 Over forty years in the Music Business and still going strong. I started out humping the equipment when everything, including the band and the sound system, all fitted in a small van.

Worked initially with Lulu, The Bee Gees and the Robert Stigwood Organisation and toured with Gene Vincent, The Beach Boys, Roy Orbison, Gene Pitney and the Walker Brothers.

Took time out to build and race a sports car: designed the engine, which I built in the engine shops for Williams F1, and had it tested on McLaren’s Dyno

I worked with Freddie Bannister on most of the Knebworth Festivals, where I coordinated the events that featured the Rolling Stones, Led Zeppelin, Genesis, the Tubes, The Beach Boys and Lynyrd Skynyrd

First entered Management in 1975 and worked in partnership with Harvey Goldsmith from ’80 to ’85. I describe management as 'getting the band money for its art'. The management company looked after Billy Connolly, Pamela Stevenson, Radio Active and After the Fire, who I took on tour with ELO, Queen and van Halen.

At HGE, I also promoted my first tour – with Jeff Beck – and did the advance work on Bruce Springsteen's tour of 1981. I also instigated the live bands on the BBC roadshows.

I left in 1985, when Harvey’s promotion company went public, to form MI5 Management and Publishing to exploit the music of T’Pau and Curiosity Killed the Cat.

Management and publishing work has continued since that time and am presently working within the umbrella of Lowspeak Music as well as my association with AWB Classics, Blues Matters, El Bazar Music and with Sonic Society Records and their act Pig & Dan.

Likes: Travelling (not the professional touring kind, where I have been everywhere, but seen only the hotel and the gig), Motorcycles, Good films, Prince Philip (someone has to – never understood why he is always lambasted – he does what we’d all like to do and gets away with it), Rambling (in the countryside and the bar), Squash, Egyptology, Cycling and of course Music.

Dislikes: Politicians (how can they tell the truth, when they need your vote?), Lawyers, Mindless TV (no longer have a set in the house), Fanatics of any kind, Celebrity culture, Shopping, Jeremy Vine (delusions of adequacy), Chavs, the British abroad, Queuing, and Sad people.