'Bowie, Bolan and the Brooklyn Boy'

“Offering a unique, first-hand account of life in London during the late 1960s and 70s, as well as the progression of a musical influence that stretches to the present day, Tony Visconti’s autobiography guides you through a musical era that saw the world of music change from shades of grey to vivid colour”

Please see below for excerpts from the above volume, published by Harper Collins 2007: please note that we have not sought permission from the publisher nor from the author to quote from this excellent book: please treat our brief page of extracts as an advertisement, and buy it yourself from Amazon UK here to read the rest. 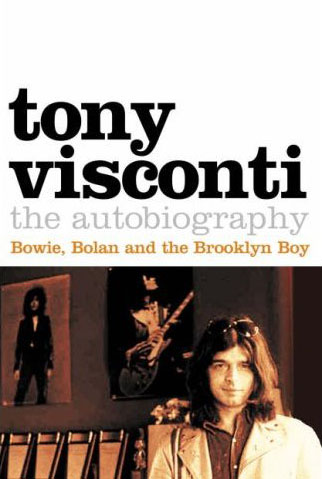 I took him into an empty office and from his briefcase he pulled out an acetate that he placed on the turntable. As he lowered the tone arm on to the grooves I had no idea what to expect. Instantly I was hit by the sound of a haunting organ played over a steady medium-slow rock beat. It was a sad, almost gothic composition, worthy of Bach, and I had heard it before. It was a variation on Air on a G String (I had paid attention during music appreciation classes in high school). At first I was under the impression that this was an instrumental as the intro was so long. After almost thirty seconds my illusions were shattered when a voice, which I took to be a black soul singer – but was really Gary Brooker – began singing those surreal, but now immortal lyrics “We skipped the light fandango, turned cartwheels ’cross the floor”. What the hell did that mean? Who cares? These disparate elements blended so incredibly well together.

“It’s a new group I’ve discovered and I took them into the studio for a few hours in order to make this demo. They’re called Procol Harum.”

The name was as strange as the music. Of course the song is now so famous, so a part of our collective consciousness, that it seems impossible to recall a time when it didn’t exist. But there was I, probably the first American to hear A Whiter Shade of Pale. For many it’s one of rock’s most seminal songs, and for me, it literally changed my life.

With barely enough time to acquaint myself with my new surroundings, Denny announced that we had a recording session with Manfred Mann at 2 pm (at the Phillips Studio just off Marble Arch). My first day.

And I was about to meet my first famous British group. Denny had agreed to produce their next single and that’s why I had to be there. He was fully occupied working on Procol Harum’s début album in order to satisfy the demand created by A Whiter Shade of Pale, which was on its way to becoming a smash hit. Interestingly the demo that Denny played for me in New York could not be bettered by re-recording, so they released it as it was.

That was the first day under my belt. If this wasn’t exciting enough Denny told me I was going to meet, and work with, Procol Harum the next day. What I didn’t know is that I would bump into Brian Jones of the Rolling Stones in a corridor at Olympic Studios and I would also see Jimi Hendrix jam later that evening at the Speakeasy in Margaret Street – a club that was the epicentre of the music industry during the early summer of ’67. God knows what would happen on my third day.

Besides working with Denny Laine during the few weeks that I stayed in Mayfair, I also worked with Denny C on Procol Harum. He was frantically trying to finish off their first album at his favourite studio, Olympic in Barnes, a state-of-the-art studio across the river from Hammersmith.A Whiter Shade of Pale came out at the end of May and was a huge hit. One evening Denny and I were walking in the hallway that separated Studios A & B and bumped into Brian Jones; he was there working on tracks for an album that would become Their Satanic Majesties Request. Brian was dressed in what looked like a French nobleman’s jacket in a shade of blue and made of crushed velvet. With frilly, laced cuffs sticking out; he was also wearing make-up. If I’d approached him from a distance, and had seen him coming towards me, I might have taken this in my stride, but we literally bumped into him as we turned a corner. I was shocked.

“Hey man, I love the Procol Harum single. I heard it on Radio Caroline, and I’ve just sent my chauffeur out to buy it for me”. I was struck by how well-spoken he was. 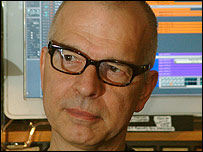 The Rolling Stones were in Studio A, which was a lot bigger than Studio B; the latter was adequate enough to record a rock group or a small string section. In Studio B, I was assisting Denny with the Procol Harum album, but it was far from smooth sailing. Denny was having problems with the band’s drummer and Denny’s solution was simple: he fired him in the middle of a session. Cordell had very high expectations for drummers and this one was not the first to feel his displeasure. In contrast Gary Brooker and Matthew Fisher were a joy to work with, and Keith Reid was always lurking in the background overseeing the entire affair. He made me feel he knew more than anyone about what was really going on in the studio – only he wouldn’t tell us because that would be cheating.

Studio A was an enormous cine stage studio with a screen and a projector; it was used for film scores. After the Stones left, Dudley Moore was in doing a score for some film, while we were in B with Procol Harum. We had to be quiet for about 30 minutes while he recorded a little piano motif with three flutes.

One aspect of that first Procol Harum album I couldn’t get my head round was the fact that it was in mono; stereo was still regarded as inconceivable for rock music or pop in Britain. In New York groups like the Lovin’ Spoonful and others were experimenting with stereo and I found it weird that in England, where they were making superior sounding records, stereo was mostly a no-go.

Denny’s bread and butter band was The Move, although I don’t think he ever took them as seriously as Procol Harum. In Denny’s mind they were just a pop band, but with both Carl Wayne and Roy Wood as lead singers and Roy’s incredible melodies and hook-laden songs, I think they were much more. I was called to write string parts for them (including Flowers in the Rain)

With the huge success of A Whiter Shade of Pale Procol Harum suddenly became a major band and central to Denny’s attentions but, and there was often a but with Denny, his attention had been captured by another artist named Joe Cocker. This led to me being asked to oversee the Procol Harum sessions while he worked across town on the Cocker album. Unlike my bad experience with Manfred Mann, Procol Harum accepted me, and as a band they were very committed to what they wanted to accomplish. It was from working with them that I learned to listen carefully to what artists stated as their goals. We worked on In Held 'Twas In I, a very long suite of side two of their album. I bravely asked Keith Reid what the title meant (Reid was a scary, laconic character) and he candidly told me that each word in the title was the first word in each of the five songs used in the suite – of course, stupid me. I had a great time working on this opus. Denny, being a singles man, wouldn’t have had as much fun as I did working on this ‘theme’ side. On 'Twas Teatime at the Circus I joined the band in the studio to scream and shout as part of the crowd. For me the crowning glory was to record a complete track all by myself; it was the oddly charming Magdalene my Regal Zonophone. The title and lyric were too surreal for a mere mortal like me to ponder. Who is Magdalene? Why is she regarded as the patroness of their record label? While these were questions few people other than myself wanted to know the answer to, many others questioned why the album bombed so badly. Like Procol Harum’s first album, this album, which they called Shine on Brightly, didn’t chart in the UK, though it’s considered by most people to be a far superior effort. To many people’s surprise it made the US album charts, reaching No24. We were fortunate that it did, as the effort we’d put into recording that album needed some reward.

Thanks, Charlie, for the transcription