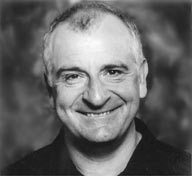 Though, of course, never a member of Procol Harum, the writer, humorist and technophile Douglas Adams was invited to perform In Held 'Twas in I at Redhill when Keith Reid was not available: he is the only PH fan we know of to have crossed the footlights in this respect.

'In principle I'd be delighted to write something for BtP,' he wrote in an e-mail at the very end of 1999, 'but I have a huge backlog of writing needing my attention at the moment, so I think that the reality is that I shouldn't make any promises … Meanwhile, have a Happy New Millennium.' Sadly, however, we embark on the said Millennium without him. 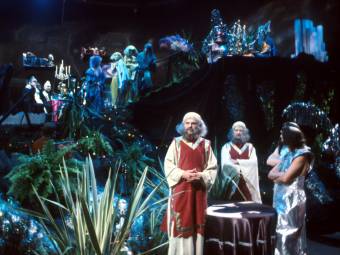 The BBC page about his life is here, and it mentions his playing guitar with Pink Floyd, though not the Procol connections.

Adams's famous 'Restaurant at the end of the Universe' (see illustration) was inspired by the explosion of sound as Mick Grabham's guitar comes in before the final verse of Grand Hotel.

Various pages relating to Douglas may be found at 'Beyond the Pale':

Douglas introduces Procol Harum at the Barbican in 1996

Douglas interviews Gary Brooker at the Barbican in 1999

The entire service (2 hours 36 minutes) is preserved online at rtsp://rmv8.bbc.net.uk/cult/hitchhikers/douglasadams.rm; the proceedings begin at about 52 minutes, GB plays with Margo Buchanan at about 1:34:00, and Holding On follows at about 1:42:00.