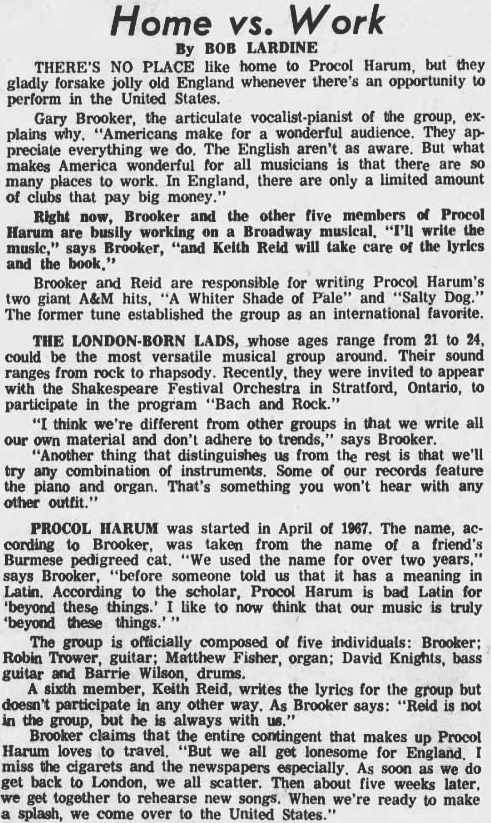 There's no place like home to Procol Harum, but they gladly forsake jolly old England whenever there’s an opportunity to perform in the United States.

Gary Brooker, the articulate vocalist-pianist of the group, explains why. “Americans make for a wonderful audience. They appreciate everything we do. The English aren’t as aware. But what makes America wonderful for all musicians is that there are so many places to work. In England, there are only a limited amount of clubs that pay big money.”

Right now, Brooker and the other five members of Procol Harum are busily working on a Broadway musical.

“I’ll write the music,” says Brooker, “and Keith Reid will take care of the lyrics and the book.”

Brooker and Reid are responsible for writing Procol Harum’s two giant A&M hits, A Whiter Shade of Pale and Salty Dog. The former tune established the group as an international favorite.

The London-born lads, whose ages range from 21 to 24, could be the most versatile musical group around. Their sound ranges from rock to rhapsody. Recently, they were invited to appear with the Shakespeare Festival Orchestra in Stratford, Ontario, to participate in the program “Bach and Rock.”

“I think we’re different from other groups in that we write all our own material and don’t adhere to trends,” says Brooker.

“Another thing that distinguishes us from the rest is that we’ll try any combination of instruments. Some of our records feature the piano and organ. That’s something you won’t hear with any other outfit.”

Procol Harum was started in April of 1967. The name, according to Brooker, was taken from the name of a friend’s Burmese pedigreed [sic] cat. “We used the name for over two years,” says Brooker, “before someone told us that it has a meaning in Latin. According to the scholar, Procol Harum is bad Latin for ‘beyond these things.’ I like to now think that our music is truly ‘beyond these things.’”

A sixth member, Keith Reid, writes the lyrics for the group but doesn’t participate in any other way. As Brooker says: “Reid is not in the group, but he is always with us.”

Brooker claims that the entire contingent that makes up Procol Harum loves to travel. “But we all get lonesome for England. I miss the cigarets [sic] and the newspapers especially. As soon as we do get back to London, we all scatter. Then about five weeks later, we get together to rehearse new songs. When we’re ready to make a splash, we come over to the United States.”