It was about November 1966 that Keith Reid and Gary Brooker started writing songs together. Gary had been lead singer with The Paramounts, a group who had enjoyed considerable popularity.

Keith had nothing to do with the "pop" business at all, except for a desire to write. They had known each other on and off for about a year.

As their own -- now much acclaimed style in writing emerged, they realised that their personal views, when it .came to recording, would be very important. They would have to be completely involved in the presentation. The best way was to have a group. 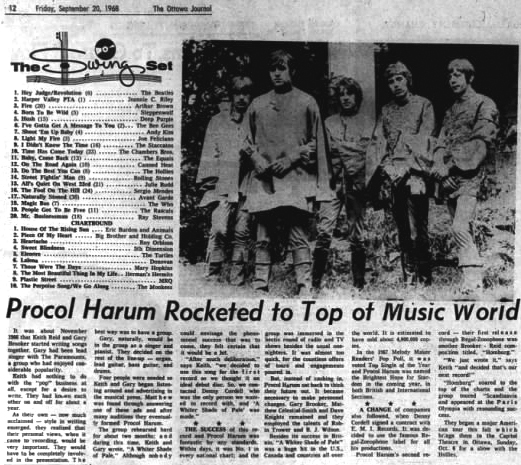 Gary, naturally, would be in the group as a singer and pianist. They decided on the rest of the line-up --- organ, lead guitar, bass guitar, and drums.

Four people were needed so Keith and Gary began listening around and advertising in the musical press. Matthew was found through answering one of these ads and after many auditions they eventually formed Procol Harum.

The group rehearsed hard for about two months and during this time Keith and Gary wrote A Whiter Shade of Pale. Although nobody could envisage the phenomenal success that was to come, they felt certain that it would be a hit.

"After much deliberation," says Keith, "we decided to use this song for the first record as we thought it an ideal debut disc.  So we contacted Denny Cordell, who was the only person we wanted to record with, and A Whiter Shade of Pale was made."

The success of this record and Procol Harum was fantastic by any standards. Within days, it was No 1 in every national chart; and the group was immersed in the hectic round of radio and TV shows besides the usual one-nighters. It was almost too quick, for the countless offers of tours and engagements poured in.

But, instead of cashing in, Procol Harum sat back to think their future out.  It became necessary to make personnel changes. Gary Brooker, Matthew Celestial-Smith and Dave Knights remained and they employed the talents of Robin Trower and BJ Wilson.

Besides its success in Britain, A Whiter Shade of Pale was a huge hit in the US, Canada and countries all over the world.  It is estimated to have sold about 4,000,000 copies.

In the 1967 Melody Maker Readers' Pop Poll, it was voted Top Single of the Year and Procol Harum was named the Brightest Hope for Stardom in the coming year, in both British and International Sections.

A change of companies also followed, when Denny Cordell signed a contract with EMI Records.  It was decided to use the famous Regal Zonophone label for all his productions.

"We just wrote it," says Keith, "and decided that's our next record!"

"Homburg" soared to the top of the charts and the group toured Scandinavia and appeared at the Paris Olympia with resounding success.