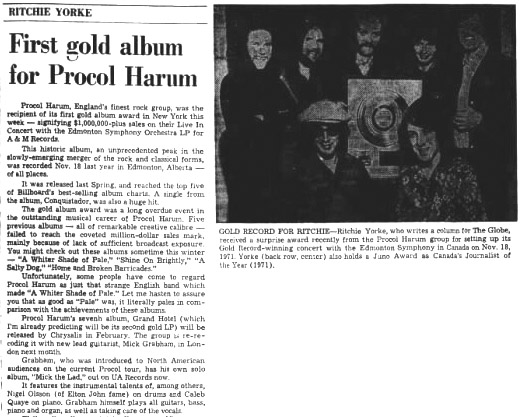 Procol Harum, England’s finest rock group, was the recipient of its first gold album award in New York this week signifying $1,000,000-plus sales on their Live in Concert with the Edmonton Symphony Orchestra LP for A&M Records.

This historic album, an unprecedented peak in the slowly-emerging merger of the rock and classical forms, was recorded 18 November last year in Edmonton, Alberta – of all places.

It was released last Spring, and reached the top five of Billboard’s best-selling album charts. A single from the album, Conquistador, was also a huge hit.

The gold album award was a long overdue event in the outstanding musical career of Procol Harum. Five previous albums – all of remarkable creative calibre – failed to reach the coveted million-dollar sales mark, mainly because of lack of sufficient broadcast exposure. You might check out these albums sometime this winter – A Whiter Shade of Pale, Shine on Brightly, A Salty Dog, Home and Broken Barricades.

Unfortunately, some people have come to regard Procol Harum as just that strange English band which made A Whiter Shade of Pale. Let me hasten to assure you that as good as Pale was, it literally pales in comparison with the achievements of these albums.

Procol Harum’s seventh album, Grand Hotel (which I’m already predicting will be its second gold LP) will be released by Chrysalis in February. The group is re-re-cording it with new lead guitarist, Mick Grabham, in London next month.

Grabham, who was introduced to North American audiences on the current Procol tour, has his own solo album, Mick the Lad, out on UA Records now.

It features the instrumental talents of, among others, Nigel Olsson (of Elton John fame) on drums and Caleb Quaye on piano. Grabham himself plays all guitars, bass, piano and organ, as well as taking care of the vocals.

Gold Record for Ritchie – Ritchie Yorke, who writes a column for The Globe, received a surprise award recently from the Procol Harum group for setting up its Gold Record-winning concert with the Edmonton Symphony in Canada on 18 November 1971. Yorke (back row, center) also holds a Juno Award as Canada’s Journalist of the Year (1971).