Procol Harum • The Secrets of the Hive

Patrick Humphries's liner note on the 2007 Compilation from Salvo Records

Strange though it may seem, there was life to Procol Harum before A Whiter Shade of Pale … Emerging during the mid-60s Beat Boom, Southend’s Paramounts – led by Gary Brooker – soon established themselves as one of the leading R’n’B outfits of the day. And, in the fullness of time, Procol Harum would be made up entirely of ex-Paramounts.

The Paramounts had first come to life in the basement of the Penguin Café on the Southend seafront. The cellar of the café, which was owned by guitarist Robin Trower’s dad, was converted into a club called The Shades, where the Paramounts enjoyed a Sunday-night residency. A further part of the club’s appeal came from the two well-stocked juke boxes, the contents of which would form the foundation of the Paramounts’ set-list when they began gigging away from The Shades.

At the very beginning, when they were still playing in Southend, the Paramounts’ repertoire was very rock’n’roll. A souvenir of that era, when Elvis, Fats Domino, Carl Perkins and Chuck Berry dominated, can be found in the 1970 Procol Harum session recorded at Abbey Road studios and eventually released as a fans-only CD, Ain’t Nothin’ To Get Excited About, with the band credited as ‘Liquorice John Death’ (details at www.procolharum.com). The more widely-available 1998 compilation of the group’s best work at the legendary EMI studio, The Paramounts at Abbey Road, also contains some tracks from that 1970 session. 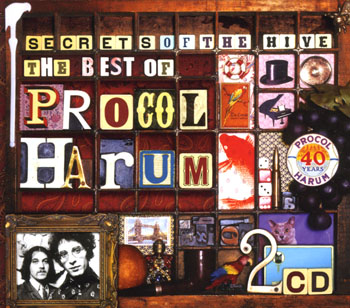 Having spread their wings and ventured inland, the Paramounts started playing the Ricky Tick circuit – Hounslow, Windsor, Reading, Maidenhead, Eel Pie Island – which had recently been outgrown by another promising R’n’B group, the Rolling Stones. Despite their new-found success, the Stones had only good things to say about the Paramounts, which helped the Southend outfit to land a record deal of their own. The parallels were there for everyone to see when the first Paramounts single was released: it was a version of Leiber and Stoller’s Poison Ivy, which the Stones had also covered on their first EP.

The top DJ on that circuit was Guy Stevens, who supplied the Paramounts with the original American recordings they would then cover. ‘A box of forty singles would arrive from America every week for Guy,’ Gary Brooker still recalls wistfully. And with luck, the Paramounts got first pick, before the Stones, Who, Kinks or Yardbirds could get their hands on them!

Poison Ivy was the only Paramounts single to register on the UK charts (reaching #35 in January 1964), but it was enough to ensure that they remained on EMI. In those days, a 45 rpm single (A and B sides) was customarily cut in a straight three-hour session. But the Paramounts found that ‘sausage factory’ approach to recording deeply dispiriting, with the result, as Gary told me much later on, that ‘we could never really get the sound on record that we got on stage’. That, together with the fact that the Paramounts’ live outings were latterly confined to backing Sandie Shaw or Chris (Yesterday Man) Andrews in cabaret, saw the group’s enthusiasm flagging fast.

However, those Paramount days did provide one last highlight – the historic final Beatles UK tour in December 1965, for which the Paramounts were the opening act. They appeared along with the Moody Blues and various acts from Brian Epstein’s stable (Beryl Marsden, the Koobas). Forty years on, Gary still remembers that Beatles tour clearly: ‘we opened it with or two or three numbers, and then we backed one or two other acts – Beryl Marsden, Patrick Kerr – for their fifteen minutes. So musically it wasn’t very satisfying. But we’d watch the Beatles from the wings, and you could just about hear them above the screaming.’

By the summer of 1966 the writing was on the wall for the Paramounts – and for many other similar groups. Bob Dylan, the Beatles and the Stones were now all leading from the front. But by then, Gary Brooker was also keen to lead rather than follow: ‘I was listening to Art Blakey,’ he told Will Birch, ‘smoking a lot of hashish and thinking about Charlie Mingus!’ The Paramounts finally split in the autumn of that year.

The story might well have ended there, had it not been for the timely reappearance of the ubiquitous Guy Stevens. Guy had known Gary during the Paramounts years, and had since encountered a boy called Keith Reid, barely out of his teens, who wanted to be a songwriter. Guy introduced the pair, and one fateful day Gary returned home to Southend with an envelope full of Keith’s lyrics. The package remained unopened for weeks. But eventually, after some not-too-gentle prompting from Keith, Gary propped the lyrics on his piano … and one of the great British songwriting partnerships was born.

Keith Reid had been writing lyrics and hawking his demo tapes around the record companies since he left school at 15. But he admits ‘I wasn’t getting much interest, until I went to Sue Records and met Chris Blackwell. He wasn’t really interested either, but he said I’ve got this bloke Guy Stevens who works for me ... go and see him. So I got chatting to Guy, and he really encouraged me.

‘Somewhere in there I got frustrated and felt I should go to New York. So I went to see Chris Blackwell again and said: “I’ll give you my publishing if you give me the fare to go to New York!” He said no, but go and see this bloke David Platz at Essex Music, and he signed me up as a songwriter.’

The plan was always that Brooker and Reid would be a songwriting team, backroom boys who supplied material to established singers – an early effort, Conquistador, for example, was intended for the Beach Boys; another for Dusty Springfield.

But with the dominance of the Beatles, the Who and Stones, all of them self-contained units with no need for outside songwriters, it soon became inevitable that for their songs to be heard, Brooker and Reid would need to form a band of their own.

‘Gary and I had the idea of a whole unique sound,’ Keith explained. ‘It wasn’t simply a question of forming a band to perform our songs, there was this whole thing we were trying to achieve: we were determined to have acoustic piano and Hammond organ, and the blues guitar … we had the concept of a total sound, and A Whiter Shade of Pale was the definition of that sound we were trying to achieve.’

Now they had the songs and the sound, all they really needed was a name. And once again, it was Guy Stevens who rode to the rescue, with Procol Harum – a name he had filed away (along with Mott the Hoople and Spooky Tooth) for groups as yet unformed.

Early in 1967, a Melody Maker advert ran: ‘Lead guitar, organist, bass wanted for new project with Y. Rascals/Dylan type sound to develop new material.’ A demo tape of the new outfit began circulating and soon reached the ears of producer Denny Cordell who, by the time he came to produce Procol Harum, had already established his reputation with acts such as the Moody Blues, Georgie Fame and the Move.

The end result was one of the most distinctive singles of all time. And the rest truly is history … .

More about this album