Jim Krapf writes to BtP about this record from his Procol collection:

"Made in France, this album has a picture of Gary Brooker, BJ Wilson, Mick Grabham, Chris Copping and Alan Cartwright in colorful, island-type shirts, Alan and Mick holding guitars with the front edge of a drum kit to the left and a white piano-grande to the right; however, the photo looks as if it were being viewed through window blinds that are uneven, resulting in a distortion of the figures."

Liner notes on back cover (in both French and English)
From which ever end you look at it, Procol Harum's career appears to be marked by extreme reactions. From the cumbersome success of the early days to a disappearance amongst total indifference. Although they released 10 albums in fruitful years, they remained fundamentally misunderstood. Even their intrusion into the hit parades in the summer of '67 couldn't change that.

Who could in fact suspect that hidden behing [sic] this strange Latin name (a cat's name and a phrase meaning beyond appearances) lay a wealth of talent. And yet...The band was founded by Keith Reid, a poet tourmented [sic] by morbid obsessions and Gary Brooker, a rhythm'n'blues pianist at times; the first met the second in 1966, somewhere in south London, sent him lyrics all through the winter, and persuaded him to record a demo in spring. 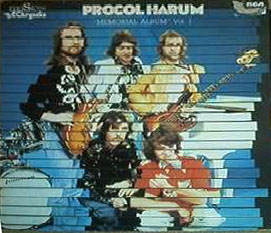 In addition to Matthew Fisher, a classically trained organist and David Knights on bass, two other musicians were called in to record A Whiter Shade Of Pale. And when the whole matter was taken up by manager/producer Denny Cordell, it turned into a worldwide success. Although slightly "borrowed" from a Bach theme, the song was to establish the "Procol" sound with in particular the almost religious Hammond of Fisher, and the metallic r'n'b voice of Brooker.

But the album after "Procol Harum" was to present a fuller view, when two talented original instrumentalist [sic] joined the ranks (both ex-Paramounts, Brooker's previous group): on drums Barrie John [sic] Wilson and guitarist Robin Trower, aged 17 [sic] at the time, and who will make his mark on the band's work with his famous solos. The overwhelming success of Pale had a disastrous result that one could guess: condemned to producing other hits, Procol Harum came up against the incomprehension of the record industry and a great deal of the public, the English public in particular, which ignored the follow-up Homburg and forgot all about them by the time the next single Quite Rightly So, was released.

In the spring of '68, Reid, Brooker & Co. decide to move to the States where they will build up a small cult following. Across the seas - which have always been a major source of inspiration to them - they release two superb albums Shine On Brightly and A Salty Dog, where the cruelty of exile mixes with musical discoveries, the classic string arrangements and Reid's [sic] playing merge together in the purest tradition of rock and blues. The return to England results in a painfully ironic record Home, the most marked by this morbid beauty which Procol Harum persist in transcending. Meanwhile, Matthew Fisher, who wants to devote himself to producing, and David Knights have left the group, replaced only by Chris Copping, who will play both organ and bass on Broken Barricades, Released in '71, this fifth album, perhaps less interesting than its predecessors, will see the ultimate appearance of Robin Trower, who has gained maturity and leaves to start on a solo career.

The Edmonton experience, where the group plays accompanied by a symphonic orchestra, sparks off a certain regain in interest and paves the way for their greatest commercial success (albumwise of course) Grand Hotel. Procol Harum's revenge will be short-lived. The group now includes Alan Cartwright on bass, and Mick Grabham on guitar, and will stay that way practically until the end.

The following two albums go unnoticed, even though their music still contains that unique blend of poison and passion; Exotic Birds and Fruit, (which contains such jewels as Beyond The Pale and As Strong As Samson and Procol's Ninth produced by Leiber & Stoller, and sees a return to a more basic rock'n'roll with hints of r'n'b. The last chance won't really be one and the sinking ship will go down for good in '77, after a last salvo (Something Magic) and a few disastrous concerts. Of the original crew Reid, Brooker and the faithful BJ Wilson were left.

Castaways without a shore, they were never able, no more than the early deserters (Fisher, Trower) to find separately the formidable magic that held in that one haunted name: Procol Harum.