Rolling in the Isles

Michael Bloom in 'The Boston Phoenix', May 1974

Thanks to Kerry Holloway for sending this to BtP. 'There are some good 'historic' references to other musicians,' he adds, 'though I question the motivation of the author. I do not believe he even gave PH a chance; it appears that his mind was made up before the concert, which in my opinion is not objective reviewing or reporting. While a person has a right to his opinion, this is an example of perhaps why PH never became as popular as they should have or received the accolades they truly deserved. But then, again, we all know better!

It was, at the very least, a week of sheer abundance. A dedicated soul could have arranged to be entertained every evening from Monday, April 22, until Saturday, the 27th, and still have missed a few, as I did.

Tuesday was the anglophile’s delight: Procol Harum, King Crimson and Maggie Bell at the Music Hall. By my lights King Crimson were the headliners. Not only do they include musicians of fearsome talent and eminent background, not only is their star rising much faster than Procol’s, but, most importantly, they blew Procol off the stage. Playing a shorter set than is their wont, they nevertheless performed two excellent songs from the new album, Starless and Bible Black, a new song of the same name, a stellar improvisation, two of guitarist Robert Fripp’s enigmatic pieces, and an old standby 21st Century Schizoid Man for dessert. The present Crimson includes Bill Bruford, late of Yes, on drums, John Wetton, ex-Family on bass, and David Cross (who was about to embark on a classical career when Fripp tapped him) on viola. The four of them play more music per person than any other musical aggregation; any three of them can play ensemble without losing the fullness of their sound; Fripp and Bruford alone could play as a complete rock band. Their musicianship is such that each can do the work of two players in any normal band.

Crimson music is stark, dissonant and wildly divergent, making heavy use of ensemble improvisation. Onstage, they present a picture of concentration. Fripp sits on a stool, out of the spotlight, hardly moving at all and playing like a demon. Bruford leaps from his kit to his board of additional percussion or his marimbas in ecstatic bursts. Lighting is subdued red floods, with a spotlight on Wetton when he sings, except during Schizoid Man and Larks’ Tongues in Aspic, Part II when harsh white and red lights cast band and audience into sharp relief. The band’s façade, the mood of songs like Lament and The Great Deceiver and Fripp’s use of tritones and whole tone scales in Fracture and his other compositions are all of a piece, a totality that Fripp off-handedly called 'entertainment, or cosmic consciousness, depending on what we are smoking tonight: yes it’s Get Hip with Crimso time.' 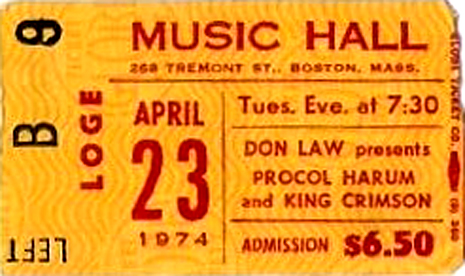 Procol Harum comported themselves like grandfathers, respected for achievements far enough back in years to have no direct bearing on the present. After they (and not the Band) had pioneered the two-keyboard sound, they went on to orchestral sounds, like the pristine A Salty Dog and the turbulent Home, and were called 'sepulchral' by unfriendly critics. Later, they immersed themselves in an ostentatious grandeur (Live and Grand Hotel), and got bad-mouthed as 'élitist.' Now they are assuming some improbable Continental cast: the new album is full of Moorish, French and Italian sonorities. Brooker’s tunes are facile; Keith Reid’s words haven’t yet recovered from whatever afflicted them last album; nevertheless, Procol performed the bulk of Exotic Birds and Fruit between off-hand treatment of their classics. I disliked every member of the group in concert except the fluid and inventive drummer BJ Wilson, as I dislike the new album (though I’ll probably grow to like it within the year, as I did the last). And after Crimson’s potent set Procol couldn’t help but sound insipid. (Concert tapes suggest otherwise!!)

Monday night Foghat, the quintessential boogie band, hit the Performance Center with Les Variations, a Moroccan Roll band. Except for the monstrous amounts of money needed to keep a rock band on the road, Foghat can be likened to the medieval troubador class. They don't play any new or different stuff, and they've been known to recycle the same riff through four consecutive songs, but they get around and play for as many audiences as possible. They’ve been on the road for nine months of every year since they set out to boogie the world into submission, and they’ve acquired more road polish than anyone. They’ll never get any more musical, but any forthcoming refinements of the boogie technology will probably be implemented by Foghat: they’re tight and flashy and professional.

Wednesday Genesis didn’t quite blow up the Music Hall as promised, due to equipment failures. Quick-thinking Peter Gabriel improvised the act around the roadies in a show that was basically a repeat of the legendary Tufts concert of last November. Watcher of the Skies, The Musical Box and Supper’s Ready predictably surpassed the Selling England material in power and majesty, especially in Gabriel’s mime. No other oldies were offered, and I found out later that only organist Tony Banks has any real interest in reviving such delights as Get 'Em Out by Friday and The Return of the Giant Hogweed. Won’t Buddah be surprised when the finally release Genesis Live and discover the band doesn’t perform most of it anymore? Nevertheless, the light, slides, disguises, dances and inimitable music worked their fantastic effect on the Music Hall audience, and it was the ovation that brought the house down.

Thursday Alan Stivell Cochevelou performed to a scant handful of hundreds at a lecture room at Harvard University. Stivell is a native of Brittany, France, and has observed the submergence of Breton culture; he is preserving the Celtic roots of Breton language and music by singing and playing the Celtic harp, tin whistle, bobarde (a truncated oboe) and bagpipes. This Celture shaped the music of Ireland, Scotland, the Isle of Man, Wales and Cornwall in addition to Brittany, which makes Stivell’s work cousin to the material from which Steeleye Span, Fairport Convention, Horslips and Planxty draw. Playing in Stivell’s band are Rene Werneer, who can rock out a fiddler’s reel better than Fairport’s Swarb, Pascal Stive, whose use of the Hammond organ as a drone instrument is a tremendous idea, guitarist Dan Ar Bras, bassist Blet Thomas and drummer Michel Santangeli. Their ensemble heavy-metal folk work has earned accolades across Europe as Celtic Rock. Stivell’s four records may be found in the import bins or in any well stocked record shop in Canada.