When it was released midway through 1971, Broken Barricades found itself up against stiff competition. The ‘pop’ music of the previous decade had already metamorphosed into ‘rock’ – but even that genre was now diversifying.

There was a widespread fondness for what we now know as Americana, exemplified by albums from The Band, Ry Cooder and Elton John. And singer-songwriters were also leading from the front, with James Taylor, Carole King and Cat Stevens all releasing best-selling albums.

In the wake of The Beatles’ Sgt Pepper, it was generally accepted that The Who’s 1969 rock opera Tommy had opened the floodgates of possibility – but then, as Pete Townshend himself later admitted, Tommy had only been made possible by Procol Harum’s pioneering In Held ‘Twas In I from 1968’s Shine on Brightly. But whoever started it, by the beginning of the ’70s every rock band of merit felt the need to express themselves over two, or four, sides of vinyl. 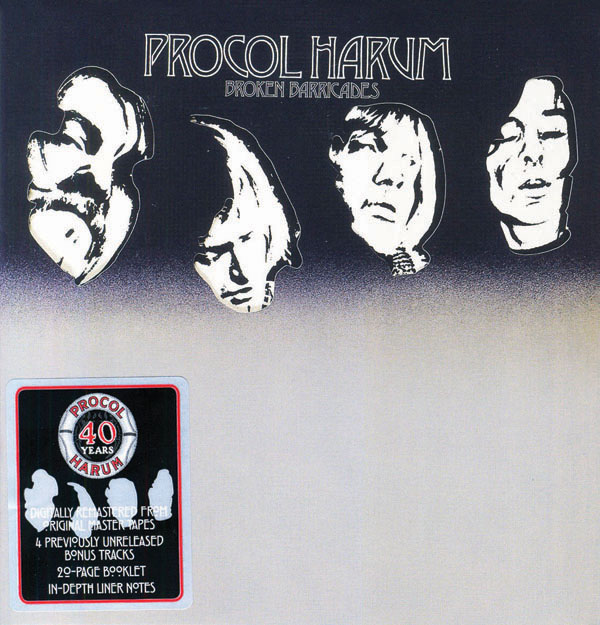 Procol Harum’s fifth album, Broken Barricades, was released the same year as albums from Yes, Pink Floyd, Caravan, Jethro Tull, ELP, the Moody Blues and Led Zeppelin, all fired with ambition to explore the possibilities offered by rock & roll. But despite the stiff competition, with Broken Barricades, Procol were, as ever, in the vanguard.

At a time when the only effective way for a band to alert audiences to their new work was by gigging, Procol necessarily squeezed in the recording of Broken Barricades between live performances. Returning from an exhaustive American tour, Procol staked their tent at AIR Studios on Oxford Street. Following the very public break-up of The Beatles – who were still limping through the law courts – George Martin had established AIR in the heart of London, as his own state of-the-art studio.

Following his work on Procol’s fourth album, Home, which had marked a rockier, harder-edged direction for the band, producer Chris Thomas was back behind the board. The recording of the new album was spread over three dozen sessions during February and March of 1971 – and the end result was Broken Barricades. Prior to that, Procol Harum albums had been characterised by at least one song that could best be described as ‘epic’ - In Held ‘Twas In I, A Salty Dog, Whaling Stories ... But Broken Barricades was a back to basics album, in which the musicians reverted to the sort of musical muscle they had employed in pre-Procol days.

For a start, the album featured eight tracks over two sides; and Broken Barricades was also notable for the relative absence of that hallmark Procol organ. After sharing a bill with The Doors in California in 1967, Procol had decided to emulate The Band’s Ray Manzarek, who employed a special keyboard, enabling him to double up on bass and organ. But with the limited employment of organ on Broken Barricades (Power Failure being a conspicuous exception), Procol’s multi-instrumentalist Chris Copping took the opportunity to concentrate on the bass guitar.

A further infusion of instrumental variety on Broken Barricades came when Chris Thomas ‘sneaked in’ a Moog synthesiser. Procol were, once again, ahead of the pack. The album was also notable for offering guitarist Robin Trower more of an opportunity to shine: of the eight tracks on the album, three were Trower melodies set to Keith Reid’s words and they show him working towards a distinctive sound of his own.

Trower was upset by the premature death of Jimi Hendrix in London in September 1970, just a few months prior to the Broken Barricades sessions. Like everyone on the contemporary music scene, Procol had been in awe of Hendrix’s abilities. Anda fortnight before he died, they had actually shared a bill with Jimi at a festival in Germany. But the festival crowd wanted the hits; the incendiary guitar pyrotechnics, which Hendrix felt he had grown out of. Talking to Chris Welch, Gary Brooker recalled watching Hendrix from the wings: ‘He just played magnificently, and the audience booed him! Trower went bloody wild ... He was totally enthralled with Hendrix’s playing ... and was ready to punch out six thousand Germans!’

Stunned by Hendrix’s death at the age of only 27, Keith Reid and Robin Trower composed a heartfelt tribute to the man now recognised as rock’s most innovative guitarist. Song For A Dreamer was one of the highlights of Broken Barricades, recalling Hendrix’s own other-worldly 1983... (A Merman I Should Turn To Be), and allowing space for Trower’s ethereal, multi-tracked guitar.

Trower’s other contributions to Broken Barricades (Memorial Drive and Poor Mohammed) were very much in the style he would develop on leaving Procol, the latter particularly earthy, with plenty of space for the guitarist’s virtuosity. Initial instrumental backing tracks for Song For A Dreamer (King Jimi) – note the Hendrix homage highlighted in parentheses – and Poor Mohammed are included among the bonus tracks on this special edition of Broken Barricades.

The songs that opened the two sides of the original album (Simple Sister and Power Failure) were both storming, powerhouse rockers. The latter in particular demonstrated just what a striking drummer BJ Wilson was – one of the few players who could actually make a drum solo interesting.

Power Failure is Keith Reid’s wry impression of life on the road with Procol: a dismal round of technical malfunctions, greasy food and endless travel hold-ups... The song was actually inspired by a real-life ‘Power Failure’ during a Procol gig, as Gary told Chris Welch: ‘Being professionals, we know exactly what to do ... as soon as the electricity goes off, the drummer starts a solo ... our drummer just keeps going until the power comes back!’ 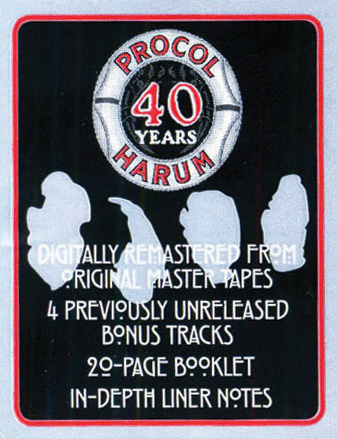 It is fascinating, if ultimately fruitless, to speculate upon how Wilson would have fared had he taken up Jimmy Page’s offer to join his new band, Led Zeppelin. Page had been impressed by Wilson during a Joe Cocker session they had undertaken together a few years before; but, in the end, BJ stayed with Procol, allowing the Zeppelin drumstool to be taken by the notorious John Bonham.

Compared to the many hundreds of versions of A Whiter Shade of Pale, covers of other Procol songs have been relatively few and far between (although there are 29 known takes on A Salty Dog, 25 of Homburg and at least 12 of Conquistador) and Power Failure is among those that have rarely been tackled, but it was recorded by guitar virtuoso Leo Kottke for his 1974 album Chewing Pine. Coincidentally, soon afterwards Kottke became the first American act to be signed to Procol’s label, Chrysalis.

Power Failure and Broken Barricades were lifted from the album as a double A-sided single. Broken Barricades itself is a worthy – but all-too-often overlooked – addition to the Procol canon. Surprisingly though, when it comes to what the song is actually about, the man who wrote the melody and sang Keith Reid’s inscrutable words remains as much in the dark as anyone: ‘Broken Barricades could be about a personal relationship, or it could be about the world falling apart ...’ Gary Brooker reflected in 2002. There is certainly the suggestion of something apocalyptic in the title track: the vision of a typically dystopian Procol world – but relayed over an undeniably beguiling Brooker melody.

Given Keith Reid’s avowed fondness for the work of Bob Dylan, it is no surprise to find a Dylan sleevenote character (‘Savage Rose’) popping up in Playmate Of The Mouth – a track on which Gary’s lascivious vocal is propped up by some funky brass and further enhanced by Trower’s gutsy guitar.

Simple Sister was a striking album opener, powered by Trower’s guitar riff; while Brooker snaps off the lyrics allowing plenty of room for Procol’s instrumental ability to flower. In complete contrast, the floating, shimmering melody of Luskus Delph is belied by the simmering eroticism of the lyric: ‘Shove me in your steaming vat / Make me split like chicken fat’ – which sounds like it could have been lifted from a hoary old Delta blues. Simple Sister is included here as a bonus cut in the form of a ‘raw track’ (as is the title track), helping to illuminate the band’s recording process as they refined a song in the studio.

On its release in 1971, Broken Barricades reached No 42 in the UK and No 32 on the US album charts. But in terms of critical acclaim, the album added considerable lustre to Procol’s reputation. Sounds found the album ‘further proves the band’s abilities... it’s Robin Trower on guitar... and drummer BJ Wilson who come across most strongly’; while John Peel chose Broken Barricades as his ‘Album Of The Year’, an accolade that The Village Voice echoed in America.

On Broken Barricades Robin Trower could be heard champing at the bit, so it was no great surprise when, after a short tour to promote the album, he quit Procol Harum and went on to a successful solo career, building on the music he had pioneered with Procol on Broken Barricades.

Far more surprising, was that by the time Procol came to play their first major headlining London concert (at the Queen Elizabeth Hall, in September 1971), the band had already undertaken no fewer than eleven American tours! Talk about prophets without honour in their own land … but with Broken Barricades behind them, Procol were set to stride purposefully onwards into the new decade.