The Well's on Fire

Gary Brooker and his PA Diane Rolph chose the fifth birthday of 'Beyond the Pale' to confirm to the fans that Procol Harum had gone into the studio, 7 October 2002, to record a new album: we learn (29 November, that it will be entitled The Well's on Fire). See here for the original glorious announcement; see below for a picture of the band in the studio on the first day, exhibiting their anniversary greetings to this website.

This ended five years of rumours, speculations, red herrings ... see them summarised here. We will of course be adding news to this page as it comes in. 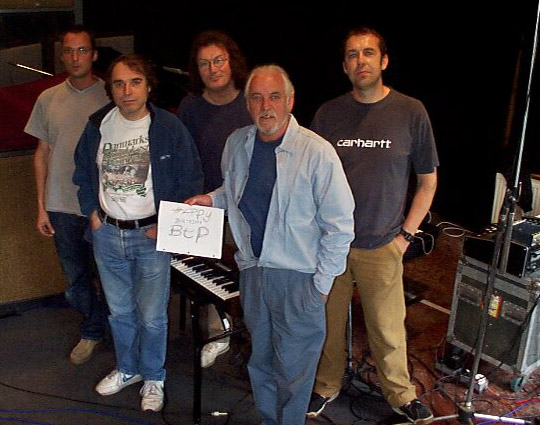 Gary had previously told 'Beyond the Pale', during the June 2002 gigs, that he was planning to record an album of all-new Procol material, and that he was not planning to resurrect 'lost' songs from the back catalogue, such as A Robe of Silk, Last Train to Niagara, McGregor, Stoke Poges, This Old Dog, Alpha, One Eye on the Future, or even So Far Behind, which last the band so successfully revived for dates in 2001. It seems at present, then, that the notion of a Diaspora album [see here] will not come to pass. Later, however, it transpired that fans' pleas had prevailed, and that A Robe of Silk and So Far Behind were to be included!

We didn't know initially if Ten Thousand Souls (An English Dream), the new song played on the summer 2002 dates, would be part of the new record or not.

BtP learns (21 October) that 'the band have been joined in the studio by Rafe McKenna, who is co-producing. Rafe is known for his productions on Big Country, Roachford, Bad Company, Richard Marx, Foreigner, UB40, Tanita Tikaram, Wet Wet Wet, All about Eve and The Corrs.' On joking that we hoped that the new album would not sound like a mixture of all these acts, we were relieved to get the following e-mail from the band's management: 'No this is going to be a Procol album, no middle-of-the-road stuff.'