In July 1995 Procol played Pennsylvania and there's a bizarrely amusing write-up about it here … a few excerpts follow, but it wouldn’t make any sense to quote the whole PH section, since it's interwoven with a scathing account of a particular member of the audience, with the performance of Jefferson Starship and Steppenwolf … do go and read the whole, strongly-worded account. 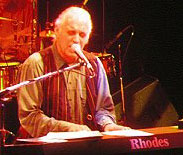 So Procol Harum comes out … and, as I expect, it's Gary Brooker and a bunch of kids … Brooker … sounds exactly as he did in 1972. Seriously. There's no air in the high notes, at all. Just perfect. However, the years have changed his appearance a little bit - he now looks like a cross between Hannibal Lecter and Howard Hesseman. That's not a bad thing, of course, it just makes the contrast between him and the KIDS on stage with him more marked. Well, this batch of kids … sound great. The organist in particular really has Matthew Fisher down to a T. And the guitarist and drummer apparently do NOT think they're auditioning for Van Halen - they were just fine. Very faithful. Although they didn't play any of my favorites, it was a great set. … the Procol Harum punchline - they wrap up with Whiter Shade of Pale, and again I'm thinking what a great Fisher this little guy does, when Brooker howls, "Matthew Fisher on the organ!" It was HIM. I guess that's why he played it so good. I don't feel all THAT bad - everyone else was fooled as well and he does look awfully young. Especially next to Grandpa Gary. (Gary tells his tale in 2007)

Mike Fornatale writes to BtP
We went to that show pretty much just to see the Starship, I'll confess, although I was looking forward to reacquainting myself with Procol. Brooker was incredible. So was Matthew. And, honestly......the rest of the VERY YOUNG band was also very good, though they all bore a frightening resemblance to Nigel Tufnel ...

The experience itself was rather surreal, as you must have gleaned from what I wrote. The audience was beyond clueless. They knew Whiter Shade. That was about it.

And, not having seen Procol in decades, I didn't know what to expect. I was hoping to hear one or two of my favorites, which are of course NO ONE ELSE's favorites ... Power Failure ... Bringing Home The Bacon ... Simple Sister ... nope [sic ... the show started with Simple Sister]. Still, they sounded wonderful. I hope they don't remember it as their worst gig ever, because there were SOME OF US that had a good time!

More Concerts at BtP | Setlist for this show