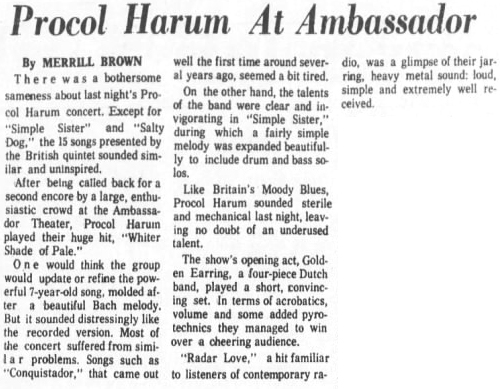 There was a bothersome sameness about last night’s Procol Harum concert. Except for Simple Sister and Salty Dog, the fifteen songs presented by the British quintet sounded similar and uninspired.

After being called back for a second encore by a large, enthusiastic crowd at the Ambassador Theater, Procol Harum played their huge hit, Whiter Shade of Pale.

One would think the group would update or refine the powerful seven-year-old song, molded after a beautiful Bach melody. But it sounded distressingly like the recorded version. Most of the concert suffered from similar problems. Songs such as Conquistador, that came out well the first time around several sears ago, seemed a bit tired.

On the other hand, the talents of the band were clear and invigorating in Simple Sister, during which a fairly simple melody was expanded beautifully to include drum and bass solos.

The show’s opening act, Golden Earring, a four-piece Dutch band, played a short, convincing set. In terms of acrobatics, volume and some added pyrotechnics they managed to win over a cheering audience.

Radar Love, a hit familiar to listeners of contemporary radio, was a glimpse of their jarring, heavy metal sound: loud, simple and extremely well received.