Meet the beat group with a difference

Paramounts, from an unknown newspaper, 1964 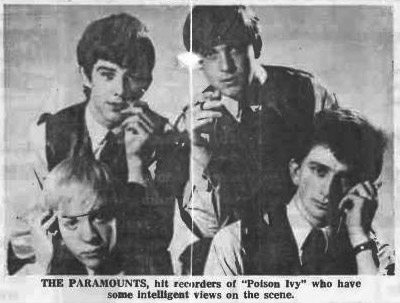 The Paramounts, hit recorders of Poison Ivy, who have some intelligent views on the scene

Take an average vocal group of 1964. Take the Paramounts. Doing reasonably well with their first disc, Poison Ivy. What do you find? This is what we found.

"There's nothing wrong with revivals of beat standards. Mind you you can never, never, do them as good as the original. Our own Poison Ivy , well, that's an old Coasters number. But we had to speed it up, because In its original form it was too slow to do any of the modern dances to.

"The Beatles are great. They've proved themselves. Dave Clark? Well, he's at the crossroads at the moment, isn't he? And the Rolling Stones? Well, they're the kings of the R&B scene. They appeal to everybody, the R&B fanatics and the commercial kids. They busted the scene wide open. If it hadn't been for them there wouldn't have been an R&B scene here in London.

"We started gradually switching over to playing more bluesy stuff about a year ago. Why? Well, the main thing is it's more subtle. That's what counts. You get very, very fed up with rock'n'roll after a while. The same old sounds. R&B is a challenge. We were lucky — we changed before the boom really came. It was a gradual thing of course. But believe us, on stage our sound is completely different now.

"Talking about sounds: people say that because we come from Southend we have the 'Southend Sound’. Rubbish, there's no such thing as the Liverpool sound, let alone a Southend sound! Every group has its own individual sound.

"We were playing around Southend for years. The scene there is terrible. There are so many groups, some serious, some not so serious, and it's cut-throat.

"We've recorded follow-ups to Poison Ivy. Don't know when they'll be out, though. It depends on this one. But do you know what? We expected it to make the charts. And that's no bragging. Ask ANY artiste about their first disc. They all expect it to be a winner. Like we said, we were' lucky."

Some quotes from the Paramounts. A four-piece. Very, very efficient combo building up a reputation. And it wasn't only luck that did it.

More Paramounts articles at 'Beyond the Pale'