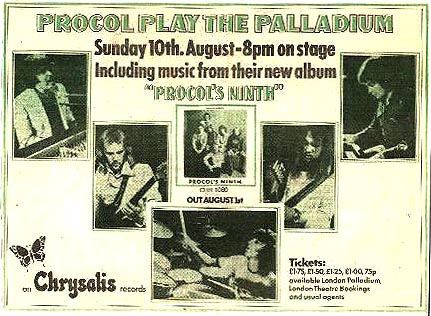 One senses that Gary Brooker could well fancy his chances with Joan Bakewell.

Procol Harum are of course, the very essence of BBC2 talkshows: British with a smattering of artiness, rough-hewn and earthy but no more than you'd find down in the Ambridge 'Bull'; and, of course, their music is strongly traditionalist with most riffs still traceable back to Brooker, Copping and Wilson's r'n'b days with the Paramounts.

They are also quintessentially English in that they take their status as a cult band so thoroughly for granted. Rather like Tory MPs with undeniably safe seats, in fact.

Including a 20-minute interval Procol Harum were on stage for some three hours. The time was filled with their greatest album cuts. And the onus appeared to be on the audience to be thoroughly familiar with all the numbers.

Even so, the band almost blew  the second (and final) date of their UK promotional tour for the new album. The first couple of numbers (both from Home), indeed, were such tangled heaps of static top that it didn't seem too improbable that Leiber and Stoller  the producers of Procol's Ninth  were up at the mixer attempting to give the boys a truly ethnic r'n'b sound. To the bone certainly. Procol Harum's sound was happening in the circle however. The mixer is in the circle at the [London] Palladium.

Without Whaling Stories, their fourth number, the band may as well have knocked the first hour and ten minutes on the head. Brooker  who'd obviously sussed that even Conquistador, the previous number, hadn't totally cut it  sang the song's intro at piano with an almost desperate sense of histrionics that were thoroughly soundwashed by Chris Copping's Garth Hudson organ sound-alikes. [see here]

It was pleasing to see Mick Grabham able to so thoroughly parody the hod-carrier-as-lead-guitarist stance without omitting to droop his eyelids during the solos that he scratched deep into the number.

With Cartwright's almost comatosely restrained bass playing and BJ Wilson's hyper-active drum-kit the fourth number was a successfully grandiose as a non brain-storming Ken Russell. Even so, the prime memory at the end of the second half was of Brooker's penchant for descending chord scales and Wilson's love for his cymbals.

B J Wilson  with his kit stage right of the rest of the band  is a supreme drum technician. Procol, however, have a tendency to pull the whole band as a rhythm section number during which Wilson's playing becomes so neurotically busy that prolonged exposure would certainly result in severe high-hat OD.

The first half, though, just did not happen. People from the band's record company expressed mild concern. Viv Stanshall emceed the second half  as he had the first  in a none-too disguised attempt to vibe up the audience. He was largely successful.

Then came Part Two. The band hustled through the set knocking out piece after piece with much added funk, and staying well clear of the near-pedantry they'd steered too close to in the first half. Butterfly Boys from Exotic Birds and Fruit, Unquiet Zone and Piper's Tune from the new album, and Grand Hotel. Plus many more.

Globules of sweat flew off of Brooker's head as he made the transformation from the neo-Gilbert O'Sullivan persona he'd presented earlier to a foot-stompin', piano poundin' Southend variant on Jerry Lee Lewis.

Then  just to put the audience back in their place as it were  Procol Harum ended their set with The Blue Danube. And Brooker probably does want to play Hamlet.

Two encores including the thoroughly redundant Eight Days A Week and that certain first hit single (during which the curtain was dropped. Always gets the audience off, that). And that was it. Enough for Procol to have saved their skins with the second part of the show.

Even so, the individual abilities, the subject matter of the number, and the general mystique, all promise so much more than is actually delivered.

Thanks to David Knight