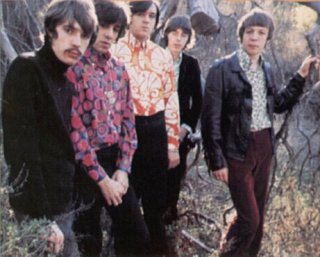 Of the thousands of small pop groups careening around England, playing the high-school dances for $120 a night, only a handful survive, record and eat. And, of the hundreds of singles cut by theses groups monthly in Great Britain, less than a turntableful reach a second pressing. But, as every gambler knows, there is always the hope, if you play long enough that your number will come up.

The Procol Harum has hit that jackpot. Once a collection of pop jobbers and garret composers, these unknown soldiers of the pop war gathered about a bizarre phrase, set it to the right Bach-and-blues background and watched it carry them to the end of the rainbow. A Whiter Shade of Pale, released June 1, has resulted in sales of 2.5 million copies and the promise of a grandiose career ahead. Already negotiations are under way for the Harum to play the capacious Olympia Theater in Paris this fall and to tour the U.S. The group has recorded an LP for release here in August and in Great Britain in September. A Whiter Shade of Pale has climbed to No. 5 on Billboard's Hot 100 and is rising.

Golden: This sudden success, instant even by pop standards, started last year when a friend uttered in some forgotten context, the phrase "a whiter shade of pale" to lyricist Keith Reid. "It stuck in my mind," remembers the 20-year-old Reid, then scratching out an existence writing songs on Denmark Street, London's Tin Pan Alley. Six months ago he unstuck the phrase, turning it into a Dylanesque dream pop poem.

Reid sent the words (not lyrics, Reid insists, but words) to 22-year-old mandarin-mustached Gary Brooker, who since he was 12 has knocked about with such groups as the Coasters and the Paramounts. Brooker composed the music, a Ray Charles mode of traditional blues buttressed by baroque-organ background. And Brooker and Reid advertised in a music magazine for a group to do it. More than 100 applied.

"We were looking for attitude," Reid told Newsweek's Kevin P. Buckley. "We didn't want people with hang-ups." They found organist Matthew Charles Fisher, 21, a classically trained musician with a pop apprenticeship; Dave Knights, a guitarist who had been with "the Establishment and other groups not worth mentioning"; lead guitarist Ray Royer, 21, and Bobby Harrison, 24, a drummer, both blues veterans.

They named the group "Procol Harum." It's the pedigree name of a friend's cat," explains Reid. "It's sort of Latin-means 'beyond these things' in the feminine gender. I thought you could live with the name. It didn't limit us."

Poor: The group worked the piece over eight hours a day in the basement of a Methodist church. "We were all poor," recalls Brooker, who is the group's pianist and lead singer. "We were borrowing bubble-and-squeak money off each other. The feeling was we would probably break up after this one record. If it made it, OK. If it didn't, goodbye." It made it so big that 380,000 copies vanished in three weeks. Among teenagers, owning the esoteric record was like having a TV set in 1949. Yet Royer and Harrison left the group on the grounds of "incompatibility"; they were replaced by Barrie Wilson, 20, from the Bean Bag, and Robin Trower, 22, from the Jam.

Glassy-eyed over their success, the group still manages to notice significant changes in their lives. "Girls who were always unattainable," says organist Fisher, "call me up and suggest we have coffee or something," But they rarely scream at the members of the group or rip their clothing. "I think we signify the beginning of the end of the pop idol," says Brooker. "It's not a screaming scene. Pop is accepted as an art form. Look at the people who complained about the sentences the Rolling Stones got: writers, artists, people like that."

Not that the Harum neglects the showbiz angle; they show up on TV in a blend of Fu Manchu Oriental regalia and Carnaby Street mod. For these former Paramounts, Jams and Bean Bags, the rhythmic, ritualized melancholy of their hit record is a personal anthem of struggle and luck. "The song seems to be me and what I've been doing," says Brooker. "When it says 'We skipped the light fandango/And turned cartwheels 'cross the floor' – that's me just running around for a long time looking for jobs. Then 'The room was humming harder/As the ceiling flew away' – when I sang that line I thought about all those draggy dressing rooms with people just hanging around, very rude people, evil."

"I think about that church basement a lot these days," adds Brooker. "It was cold then. Now it's warm."