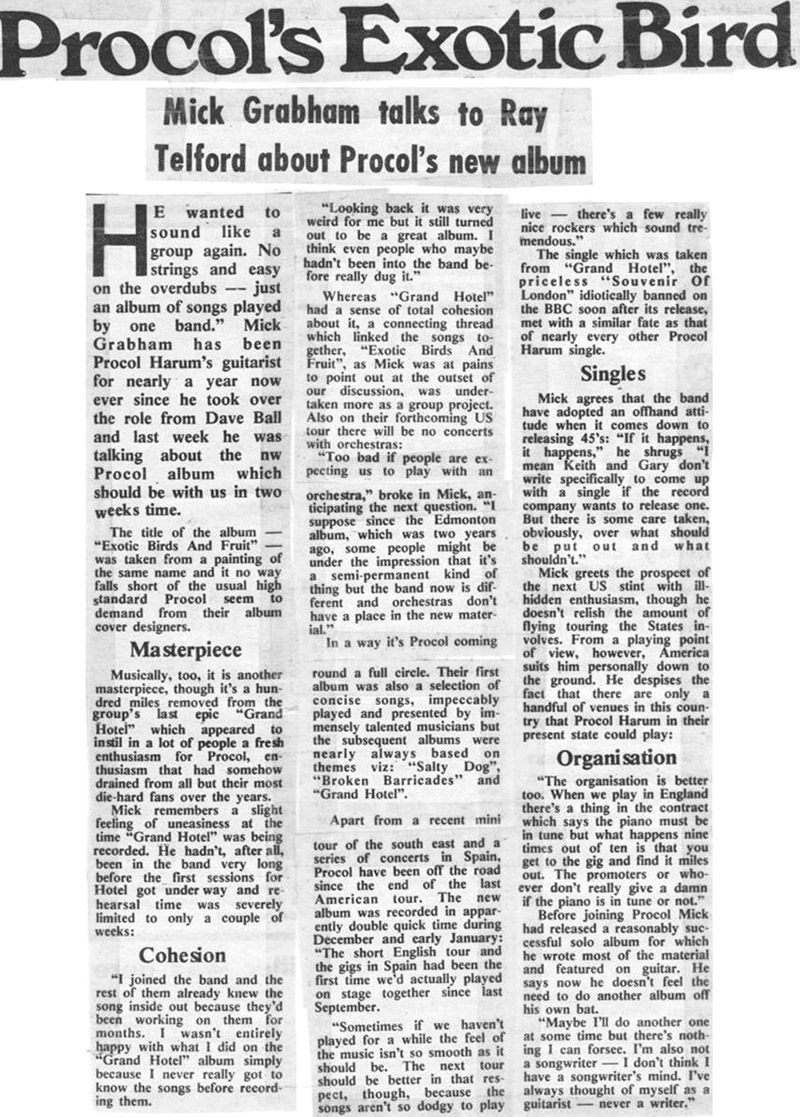 He wanted to sound like a group again. 'No strings and easy on the overdubs – just an album of songs played by one band.' Mick Grabham has been Procol Harum's guitarist for nearly a year, now ever since he took over the role from Dave Ball, and last week he was talking about the new Procol album which should be with us in two weeks' time.

The title of the album, 'Exotic Birds And Fruit' was taken from a painting of the same name and it no way falls short of the usual high standard Procol seem to demand from their album cover designers.

Masterpiece
Musically, too, it is another masterpiece, though it's a hundred miles removed from the group's last epic 'Grand Hotel' which appeared to instil in a lot of people a fresh enthusiasm for Procol, enthusiasm that had somehow drained from all but their most die-hard fans over the years.

Mick remembers a slight feeling of uneasiness at the time 'Grand Hotel' was being recorded. He hadn't, after all, been in the band very long before the first sessions for 'Hotel' got underway and rehearsal time was severely limited to only a couple of weeks.

Cohesion
'I joined the band and the rest of them already knew the songs inside out because they'd been working on them for months. I wasn't entirely happy with what I did on the 'Grand Hotel' album simply because I never really got to know the songs before recording them.'

'Looking back it was very weird for me but it still turned out to be a great album. I think even people who maybe hadn't been into the band before really dug it.'

Whereas 'Grand Hotel' had a sense of total cohesion about it, a connecting thread which linked the songs together, 'Exotic Birds And Fruit', as Mick was at pains to point out at the outset of our discussion, was undertaken more as a group project. Also on their forthcoming US tour there will be no concerts with orchestras:

'Too bad if people are expecting us to play with an orchestra,' broke in Mick, anticipating the next question. 'I suppose since the Edmonton album, which was two years ago, some people might be under the impression that it's a semi-permanent kind of thing but the band now is different and orchestras don't have a place in the new material.'

In a way it's Procol coming round a full circle. Their first album was also a selection of concise songs, impeccably played and presented by immensely talented musicians, but the subsequent albums were nearly always based on themes viz: 'A Salty Dog', 'Broken Barricades' and 'Grand Hotel'. Apart from a recent mini-tour of the south cast and a series of concerts in Spain, Procol have been off the road since the end of the last American tour. The new album was recorded in apparently double quick time during December and early January: 'The short English tour and the gigs in Spain had been the first time we'd actually played on stage together since last September.'

'Sometimes if we haven't played for a while the feel of the music isn't so smooth as it should be. The next tour should be better in that respect, though, because the songs aren't so dodgy to play live – there's a few really nice rockers which sound tremendous.'

The single which was taken from 'Grand Hotel', the priceless 'Souvenir of London', idiotically banned on the BBC soon after its release, met with a similar fate as that of nearly every other Procol Harum single.

Singles
Mick agrees that the band have adopted an offhand attitude when it comes down to releasing 45s: 'If it happens, it happens,' he shrugs. 'I mean Keith and Gary don't write specifically to come up with a single if the record company wants to release one. But there is some care taken, obviously, over what should be put out and what shouldn't.'

Mick greets the prospect of the next US stint with ill-hidden enthusiasm, though he doesn't relish the amount of flying touring the States involves. From a playing point of view, however, America suits him personally down to the ground. He despises the fact that there are only a handful of venues in this country that Procol Harum in their present state could play.

Organisation
'The organisation is better too. When we play in England there's a thing in the contract which says the piano must be in tune but what happens nine times out of ten is that you get to the gig and find it miles out. The promoters or whoever don't really give a damn if the piano is in tune or not.'

Before joining Procol Mick released a reasonably successful solo album for which he wrote most of the material and featured on guitar. He says now he doesn't feel the need to do another album off his own bat.

'Maybe I'll do another one at some time but there's nothing I can foresee. I'm also not a songwriter – I don't think I have a songwriter's mind. I've always thought of myself as a guitarist – never a writer.' (thanks, Per, for the scrapbook scan)