Me and My Music

My father was a musician and that's how I came into it. He played lots of instruments but concentrated on Hawaiian guitar. I started piano lessons when I was five, then gave it up for a couple of years when I was nine because we moved and I wasn't really interested. I was more concerned with other things I must have been in the Boy Scouts or something. 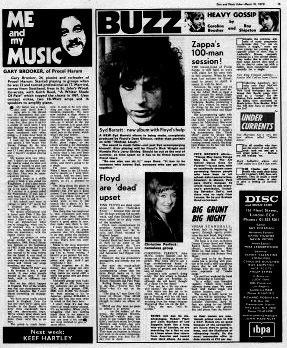 I took up the piano again and passed a few exams with Trinity College. By the time I packed up lessons when I was 13 I was playing in groups and I haven't stopped playing since.

My lessons were very informal. I didn't do classical stuff. My teacher asked me what sort of songs I wanted to play and he would write them out for me B just the chords and the top lines. That way he maintained my interest.

I played banjo in a skiffle group. I think it was called the Kingfishers. I don't play banjo now but I'm thinking of taking it up again. When I was 15 I started in a group called the Paramounts. It was just a rock band, or R&B, or whatever you want to call it.

I left school and went to college to take A-levels but I dropped out. My heart wasn't in zoology.

We turned professional and it lasted until 1966. I like this life now, but there was a time when I didn't want to do it. You get disheartened when you're struggling, when you're all cramped into a broken-down van, spending half the time on motorways with the engine blown out.

I gave up groups to write songs instead of playing in September, 1966. Procol Harum was formed at the beginning of 1967. Keith writes the words and I write the music. We just wanted to be song writers but we found it very hard to get people to do things. The only way was to form our own group and record our songs ourselves, our way.

Whiter Shade of Pale was a hit because it was a good record. It was what people wanted at the time. It was fresh, with a different approach.

But we just didn't happen in England. Part of the trouble was that our management was based in America. But I can't blame everything on management.

We have never really played much in England. Over the last two years we've spent nine months in the States. We've done three one-month tours and two three-month tours. We've always gone down well in America, and what we have done there we'd like to do here.

The group is much better now. It used to be very plodding and there wasn't much freedom, musically. We have now reached a stage where a four-minute song needn't necessarily stop after four minutes  as it would in the old days. Everyone is in touch with each other and what we're playing. We all contribute an equal part to the music, which wasn't the case before. Chris Copping, our bass player, also plays organ, and Keith plays organ, so we switch around a lot depending on the song. We are entering an improved phase. The group is better than it has ever been and I'm hoping we can happen over here now. We've just finished an album in four weeks, and there's going to be a single.

I'm more satisfied now. When I listen to the LP tracks they're exactly as I want them to sound. And we don't have the trouble with vans and promoters, so it's a pleasure to play. The thing about the piano is that it's the hardest thing to amplify  but I've got a good system. I use between two and six contact mikes and get it really loud, or as loud as I would want it, but it still sounds like a piano. It's important not to destroy the piano tone.

One thing that has improved is that promoters care more about groups these days. If you say you can't play unless there's a good piano in tune, they make sure there is one. I enjoy playing but, to me, the main idea is to please someone else. It's impossible to do that unless the audience can see that you are enjoying it too. That's how you communicate.

Music is the most important thing to me; everything evolves round it. When I'm not playing I'm at home writing. I haven't a set pattern for writing  I just sit down at the piano and play until I get something I like.

What surprises me is the money that groups can earn now. Four or five years ago (that makes me sound old!) a really top group only got about 350 pounds a night. Unknown groups were lucky to get 60 or 70 pounds. Now even the unknown can get 200 to 250 pounds and top groups 700 pounds, even 1,000. We thought we were earning a lot in America, getting 350 - 400 pounds a night, but you can earn twice as much as that here now.

I don't think it's bad that there's so much money around. It's an incentive. When you're struggling and not earning much there is no reason to strive to be better. But when you can earn a lot you are more inclined to give more effort.