W George Lovell for 'Beyond the Pale'

I wasn’t at all sure that I’d be able to fit them in, but I did. It took a fair bit of improvisation, for I was teaching two big undergraduate classes that fall term, with enrolments of some four hundred students. I was able to arrange good cover for the one class I would actually not be at Queen’s University – the one in Kingston, Ontario, not its UK namesake in Belfast, Northern Ireland – to deliver in person. I braced myself, furthermore, for a couple of contingencies at an iffy time of year: come November, the weather on the US eastern seaboard, to say nothing about the Canadian prairies, can nix the best-laid plans of mice and Procol Harum fans. But the prospect of hearing the band play four times in the space of a week, two gigs on their own, two with the Edmonton Symphony Orchestra, was too tempting not to pursue. Having added three concert outings in the summer of 2010 (see here) to the twenty-seven documented in my memoir, The Waiter Brought a Tray, I relished raising my lifetime “heard-them” tally to thirty-four. The vignettes that follow afford admiration and appreciation of a rock group whose star, unlike that of most, still shines on brightly.

By all accounts, Guy Fawkes’s Night – “Remember, remember the fifth of November/ Gunpowder, treason, and plot” – was celebrated in Westbury, Long Island with a bonfire of a concert I unfortunately missed. In my bent to combine business with pleasure, I had contacted a colleague of mine, the erudite John M Weeks, before I left on the trip. John is chief librarian at the Museum of Archaeology and Anthropology at the University of Pennsylvania in Philadelphia. It’s a sunny Friday morning, nothing like the miserable day before, when I embark on the two-hour hike from Harry’s Burg (as Marvin calls it) to Philly. John shows me the treasures that were donated to the library in the late nineteenth century by Daniel Garrison Brinton, a scholar who himself acquired works once in the possession of the great French Mayanist, Charles Etienne Brasseur de Bourbourg. Among them is the Annals of the Cakchiquels, a sixteenth-century Maya text that tells of conquistador exploits in Guatemala from a native point of view: Spanish soldiers of fortune, the source confirms, plundered rapaciously, but indigenous culture survived, in this case in remarkable written form. The exhilaration of consulting such a rare manuscript is matched by the awe I feel when visiting the museum the following day. There I contemplate the Rosetta Stone of Maya epigraphy, Stelae 14 from the archaeological site of Piedras Negras, the code of which was cracked by Tatiana Proskouriakoff in the 1950s, ushering in a new era in Mesoamerican historiography. After my heady spell upon Olympus, I cross the Delaware River into New Jersey, hopes pinned on Procol Harum maintaining my state of inner elation. 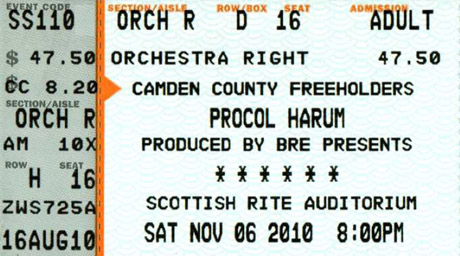 They certainly do. It is a memorable evening from start to finish. Arriving at the Scottish Rite Auditorium well ahead of play time, I get the OK from manager Chris Cooke to set up shop on behalf of BtP, selling copies of The Waiter Brought a Tray. The modest funds generated by book sales help support the website and, tonight also, the local arts group responsible for organising the event. As at the concert in Canandaigua earlier in the summer, autographed copies of The Waiter, like the ceiling in a famous song, proverbially flew away. When my stock runs out, I scribble down the names and addresses of fans, and commit to sending them a copy of the book on my return to Canada. The banter and camaraderie raise a smile from my table companion, Ruth, engaged by Chris and Scottish Rite management to take care of merchandise that includes tee-shirts of the tour, CDs, and DVDs. I disburse Ruth the local arts group’s share of Waiter proceeds when I hear Shine on Brightly start up, and make my way to my seat inside the auditorium with the help of an usher. She settles me in an aisle location next to someone who also happens to be named George, a retired schoolteacher with whom I had exchanged pleasantries during his purchase of The Waiter. He points his head toward the stage, and nods approvingly.

In the wake of Homburg Gary pulls another box from his Book of Orchids, this one concerning a hypochondriac called Robert. The concert programme attributes the Commander as saying “Procol Harum is a soul and blues band,” a designation much in evidence during The Wall Street Blues (Geoff’s guitar prowess gets huge applause) and A Rum Tale. I can feel the George to my left loving every minute of it, his wife too. A Dream in Ev’ry Home and One Eye on the Future are followed by Simple Sister (Gary requests Geoff “to give us some of that heavy metal stuff”) and an exquisite rendition of Whaling Stories. After a short intermission we return to The VIP Room, to be treated next to a reprise of Kaleidoscope.  George leans toward me once he catches the drift. “I was a little puzzled by the lead in,” he remarks. “What a surprise!” The mood turns solemn in The Blink of an Eye, only for us to set sail more playfully, to the rhythm of Pandora’s Box, across the Spanish Main. A more pragmatic side of Gary then intervenes.

“We’re off to Edmonton tomorrow,” he divulges, “to play again with orchestra and choir. We’d like to take advantage of you” – his comments are proffered in a pleasant way, not negatively – “and rehearse some of the songs we might be doing.”  The Collingswood audience, far more numerous than two nights before in Harrisburg, is wooed by Broken Barricades, which in fact did not get played at either of the two Edmonton shows. Though “brave” words written down are sung as “strange,” a mood of melancholy prevails, giving way to nostalgia as An Old English Dream, innuendos of Elgar and all, conjures up more principled, less self-serving times. Gary slips off to a world of his own, retrieving from it a fragment of memory he is compelled to share.

“There was a billboard all over the place the first time we were here,” he recalls. “Some guys selling tyres. Are they still around?” George cracks up, as do many others. “Those were The Pep Boys,” he whispers. Long gone, just like Geek, but remembered fondly, if the peals of laughter from all around the auditorium are indicative. The rapport is so entertaining that Gary and crew, uncharacteristically, miss the boat.  “That was the last number in our set,” he reveals upon composing himself, “but we forgot to go off.”  They finally exit after A Salty Dog, dedicated to “The Pep Boys and anyone else who watches from above.” George’s wife is ecstatic after hearing her favourite number, and stands to lead the ovation, prolonged and sustained.

Toujours l’Amour is the first encore, in which a French girl offers not to give Gary a chance but to teach him to dance. The second is Conquistador, its words, schoolteacher George asserts, “capturing the Age of Exploration” better than any classroom text. A third encore – “We wouldn’t want you to go home not having heard it,” Gary contends – is fittingly A Whiter Shade of Pale, which I never tire of listening to, especially played live.

Outside I huddle with Evan, Marvin, and Tito, four diehards among a handful of others braving the cold wind, wishfully thinking that Procol Harum might appear and another “after hours” gathering take place. Not to be, and perhaps for the best. A long day’s drive awaits me, followed by a long day of classes. After that I take to the skies. A pair of concerts beckons on the Prairies. I have to pace myself for a return to the city where I was a graduate student in the 1970s, a city associated with one of Procol Harum’s finest hours, itself a landmark in the history of rock.