'I feel Sherlock Holmes right about now!  I have been searching for two or three years to find this info.

'When I look at BtP's list of Procol Harum concerts in ’77, the last two are the Spectrum on Friday, then the Palladium on Sunday, yet one list shows a Saturday show in Easton (close to my place), giving no detail.

'I have called radio programs to talk to the oldest DJs to probe their memories (tough asking dopers to recall 1977!), going to the library to search old newspapers, no luck.

'I then decided to look at where they could have played; Easton is quite small, yet has one college of note, Lafayette.  I discovered their student newspaper online, and … here you go!  (scroll right down the page)

'The second to-last-show of the Old Testament was NOT Philadelphia, but good old Easton, PA, about two miles from my home!

'The next day was the last concert, in New York.  The ironic thing is, although I now live near this site, when they played the concert I was in Bournemouth UK, closer to Gary’s home. 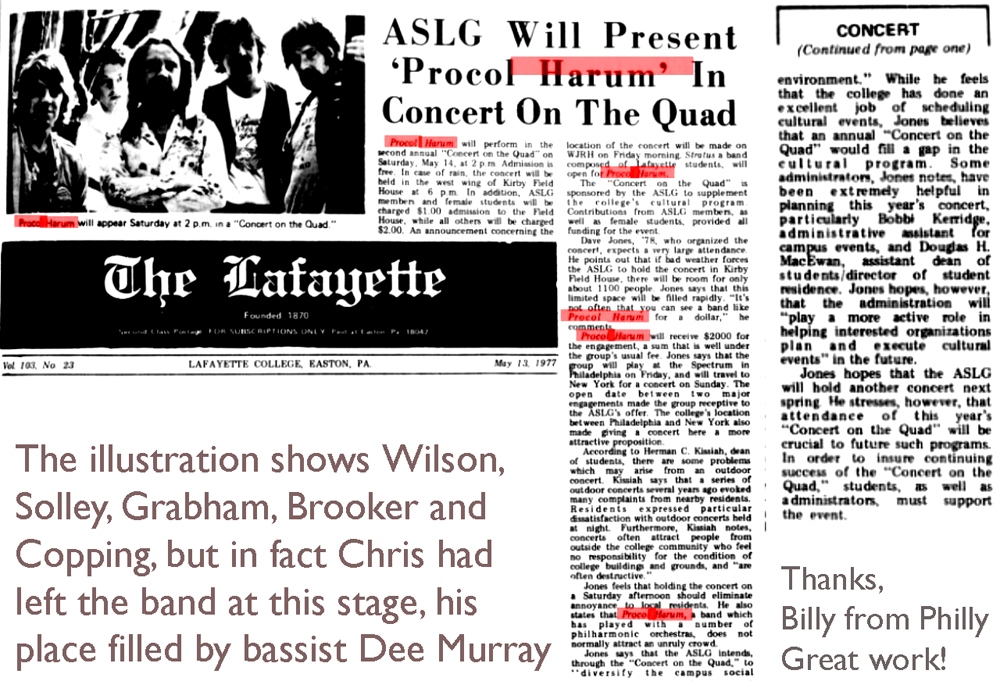 ASLG will present Procol Harum in ‘Concert on the Quad’

Procol Harum I will perform in the second annual ‘Concert on the Quad’ on Saturday May 14 at 2pm. Admission is free. In case of rain, the concert will be held in the west wing of Kirby Field House at 6 pm. In addition, ASLG members and female students will be charged $1 admission to the Field House, while all others will be charged $2. An announcement concerning the location of the concert will be made on WJRH on Friday morning. Stratus, a band composed of Lafayette students, will open for Procol Harum.

The ‘Concert on the Quad’ is sponsored by the ASLG to supplement the colleges cultural program. Contributions from ASLG members, as well as female students, provided all funding for the event.

Dave Jones, ’78, who organised the concert, expects a very large attendance. He points out that if bad weather forces the ASLG to hold the concert in Kirby Field House, there will be room for only about 1,100 people. Jones says that this limited space will be filled rapidly. ‘It's not often that you can see a band like Procol Harum for a dollar,’ he comments.

Procol Harum will receive $2,000 for the engagement, a sum that is well under the group’s usual fee. Jones says that the group will play at The Spectrum in Philadelphia on Friday, and will travel to New York for a concert on Sunday. The open date between two major engagements made the group receptive to the ASLG's offer. The college’s location between Philadelphia and New York also made giving a concert here a more attractive proposition.

According to Hermann C Kissiah, dean of students, there are some problems which may arise from an outdoor concert. Kissiah says that a series of outdoor concert several years ago evoked many complaints from nearby residents. Residents expressed a particular dissatisfaction with outdoor concerts held at night. Furthermore, Kissiah notes, concerts often attract people from outside the college community who feel no responsibility for the condition of college buildings and grounds, and are often destructive.’

Jones feels that holding the concert on the Saturday afternoon should eliminate annoyance to local residents. He also states that Procol Harum, a band which has played with a number of philharmonic orchestras, does not normally attract an unruly crowd.