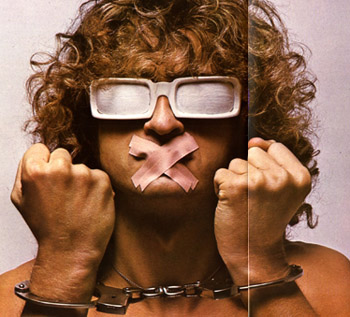 Michel Polnareff (1944) was a very famous French pop singer in the sixties. His father wrote a couple of songs for Edith Piaf. Michel himself had a few huge hits in 1966 with La Poupée Qui Fait Non, L'Amour Avec Toi and Ta Ta Ta Ta.

This paragraph is now superseded, but do read it ... But, like many other great French singers, Michel wanted to make it big in the rest of the world too. Originally we assumed that our French superstar went to London in the summer of 1967, looking for a songwriter who could add English words to his music. It seemed logical that he would seek out the most famous songwriter (especially in France, where AWSoP scored better than in any other country in the world) at the time, none other than Keith Reid.

However Keith Reid informed BtP (Summer 2008) that the writing of Time Will Tell considerably predated the formation of Procol Harum, and that his words were brought together with Polnareff's music thanks to the efforts of Keith's publisher, David Platz.

It was definitely aimed at the international market as the single sleeve in Germany explicitly stated: Michel Polnareff singt in Englisch! Despite all these efforts the single sank without a trace. Later the two tracks also appeared on the album Michel Polnareff. After this Polnareff didn't work with Reid again.

Michel had another stab at international fame when he released in 1976 two albums on Atlantic: Michel Polnareff and Lipstick. Again he failed. 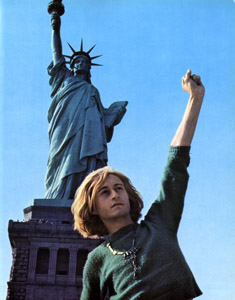 Polnareff has continued in music / acting: there are two web sites (here and here)devoted to him. One boasts of his heavy friends, including Keith Reid, Jimmy Page who played on La Poupée Qui Fait Non, Mike Oldfield etc.!

The other is Japanese and lists a Japanese bootleg called The Collection Of Masterpieces which has the KR songs on it ... there are other songs in English on it such as Gloria and one I've never heard of: so Polnareff may have turned to other wordists.

The former site gives details of a 3CD remastered collection Les Premières Années, with Real Audio samples. The two Reid songs are on Volume 1 ... but sad to say I didn't get to hear them as they are not in Real Audio ...

So Polnareff does still seem to be active (if not widely sold) and keen on electronic musical instruments. There is a French radio interview here; this is probably more than you'll ever need to know.

November 1999 saw a Polnareff tribute album reviewed here: (the NME didn't seem to like it very much, awarding it 'best left to cocktail bars and those battling their way through language courses, 4/10') Ultra-completists will want to rush out and discover whether it includes the Reid collaborations, but it doesn't! Artists featured include Pulp, Nick Cave, Saint Etienne, and Marc 'Salty Dog' Almond. Nick Cave is always worth a listen!