'Procol: band on a knife-edge' by Michael Watts

It was Richard Goldstein, I think, in The Poetry Of Rock, who described Procol Harum as an intellectual, ever striving to contain the Steppenwolf within him.

That’s just about the most applicable encapsulation of their style that I’ve seen. It touches on their dilemma – from this listener’s point of view at any rate – of trying to reconcile their pretensions with their visceral qualities. 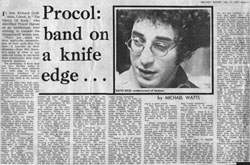 The partnership of Keith Reid and Gary Brooker seems to have frequently been balanced on a knife edge: it’s been a continuous avoidance of a musical/lyrical ponderous pomposity that wells to the surface occasionally.

And yet, when they have maintained this balance and the beast within has been allowed to show his face too, the result has been music both highly sensual and melodic, a successful marriage of rock’s gutsiness with its current refined artistic processes.

Brooker’s conception of the band’s musical direction has usually complemented Reid’s writing and enhanced those qualities of elusiveness and alienation that always seem to pervade his lyrics.

Reid’s world, as viewed through his lyrics, is one of confusion, a place where disorder reigns and everything is fragmented. There appears to be little room for optimism: “The oceans have ravished and strangled the land…. your prayers are unanswered, your idols absurd….. “ go the lyrics in Broken Barricades. And running through many of his songs is this undercurrent of fatalism, this tense of impending doom which Brooker’s music tightens like a screw.

This is mildly curious, because Reid himself is far from a fatalist. He’s much more on the existentialist side of the fence, with a firm belief in the individual’s insistence to assert his conscious will (he talks very passionately, for example, about the dominance of this country’s political parties).

He agrees at the same time, however, that the artist is frequently having to contend with the identity that outsiders wish to place upon him. It’s the old question: is the artist’s true self reflected in his work. His answer is that when a person creates, he is creating what he wants to be. You can’t be more existential than that.

“Images should only equal truth,” he said, as we talked last week. “When you’re writing you’re trying to create a true situation, or choosing a subject and trying to find the truth in your treatment of that subject.

“There’s a story, narrative, in my songs, sure. Most of my writing has been very personal and acutally [sic] related to what was happening to me, and I’ve written things in a straightforward style, but if you do that it’s limiting – A meets B and then C, etc. which is all that is. When I’m writing I’m trying to create situations or resurrect experiences. I think only bad songs use imagery for imagery’s sake. If the lyrics are good you’re using the imagery to create, to get the feeling or emotion you felt or whatever. When someone uses an image truthfully, then you say I know exactly what he means but that’s because I’ve felt it. 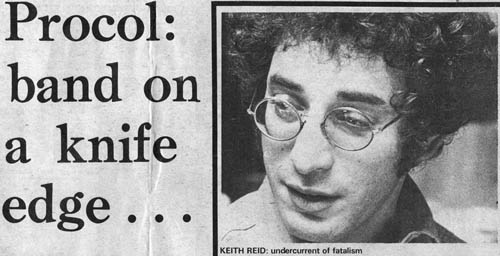 “The difference is, I believe, between truth and lies, and I think people recognise what’s good or bad by the way they relate to it. An abstract painting can only work if it’s meaningful.”

Unfortunately, he points out, not every one appears to recognise the validity of this argument in contemporary music. Reid has little but contempt for the vast bulk of lyric writers among rock groups. He makes highly valid remarks about the sterility and bloated nature of a great deal of the songs currently being composed.

The trouble is, he feels, an artificial situation has been created. We have reached the point where the performer is almost obliged to write his own material while the writer – Randy Newman is a good instance – has simultaneously found himself delivering his own statements in front of an audience. This extension of roles has worked out much better for the writer/performer because in an era when the material is more important than the performer he has this craftsmanship as his artistic bedrock.

“There’s a lot of people who – I hesitate to say this – they just have no business writing. The way things have gone it’s expected for singers and groups to write their own material. If someone says, I’m forming a band, then the public expects them to be writing the songs, but it doesn’t follow that the outcome will be good, that if you’re a great singer then you’re a great writer.

“This situation is responsible for all the bad music that’s around. When someone talks about a bad group these days, you’ll usually find it’s one doing their own material. It seems to be a requisite now.

“Songs nowadays are so much rubbish, both musically and lyrically. There’s still a number of good writers around, like Joni Mitchell and Randy Newman – he’s my all-time favourite – but all these progressive groups,” he shook his head dismissively… "the only kind of solo performer that I know of are those who’re successful. But look at all these average groups that are around; you hear about them from the moment they start off! Good songs, I believe, will always be played. That’s why you still hear Beatles records on the radio. But do you ever hear Cream numbers?”

The problem is, of course, one of identity, as was suggested above.

“I suppose what it is is that people want to identify, and they identify with someone writing their own songs very easily, they think they know the person through their songs. It’s a lot more to do with showbiz than people think. It’s not much difference, not far removed, when people were mad about movie idols like Marlon Brando and James Dean.

“People want to identify with their idols.

“I think people tend to think the artist is his songs. There’s just no way out not to identify him with his songs, but just because Bob Dylan, for example, was writing songs at one time about poor people when he was a rich man doesn’t mean to say that his songs were not truthful. It’s got nothing to do with him being rich. The point is if what’s intended is truthful. As long as a song is truthful it doesn’t matter who the person was who created it. After all, you don’t expect the actor who’s portrayed a thug on stage to be a thug when he comes off, but you expect his characterisation to be truthful.”

The danger of this process of identification is that it can lead the artist to shape his creativity around the demands of his public. Reid believes that several people now are only writing what they think the public wants to hear, and cites Lennon’s Power To The People as an example. He also points out that there are about ten records in the American Top 100 on similar lines.

“There was a time when people wanted to hear Adolf Hitler’s “The Greatest Thing That Ever Happened to Germany.” It’s like Enoch Powell; he’s now reaffirming what people want and he’s doing it in an intellectual way and putting it nicely. You can capitalise on people’s emotions quite easily.”

He is not concerned with being a propagandist; he is more interested in the continuation of his partnership with Brooker. This seems in little danger of disruption, partly because Procol seem at last to be impinging on the international consciousness, and because Reid doesn’t think, now that both he and Brooker have reached the point of mature collaboration, that any one else would be capable of replacing Brooker.

Unlike too his mentor Randy Newman, he will not turn to performing. His abilities, he says, don’t lie in that direction. But then, he’s always open to interpretations. Like the time he met this girl in America who had done her college thesis on Salty Dog.

“She told me she had five different interpretations. There was a religious one, a sexual one, and three more which I can’t recall. Of course, I don’t have an interpretation of the song. The spirit of it was trying to conjure up an epic voyage. But yes, I thought it was really interesting to read.”