Keith Reid really is one of the unsung heroes of the recent pop and rock world. When the man who co wrote A Whiter Shade of Pale releases an album you really have to sit up and take notice. In fact, Keith wrote all the Procol Harum lyrics from 1967 onwards. It was the understated Reid who also wrote the hugely successful John Farnham hit You're the Voice and this new album The Common Thread (Rockville, 2008) is also noteworthy for containing the original version of that song. 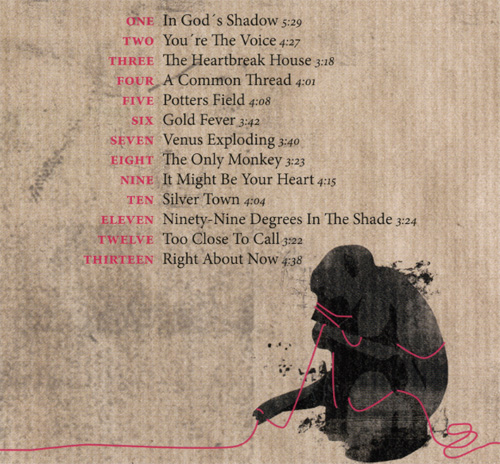 The Common Thread contains thirteen exquisite songs, written by the man himself who has gathered together a host of notable musicians to perform them. A wide range of vocalists – Chris Thompson of Manfred Mann’s Earthband, Steve Booker, Bernie Shanahan, Michael Saxell, Chaz Jankel, the instantly recognizable John Waite, New Jersey’s own Southside Johnny, and the uniquely talented Terry Reid – appear on the album. Keith describes the project as ‘a dream that has become a reality’ adding ‘these songs have accompanied his life like a ‘common thread’'.

The album successfully fuses songs in every style from soft beautifully written ballads, pop, Americana, sometimes blues-tinged or richly coloured by Celtic or Latin touches. One thing is for certain: when Keith Reid writes a lyric, you really should stop what you are doing and listen. He is a poet, an accomplished writer of audio images that tell a story whilst tugging away at your emotions. It is a smooth and rewarding ride from the opening number, In God’s Shadow, sung by John Waite, a song that contains all the signs of what is to come on this lush collection. Superbly crafted lyrics and presentation are a constant feature of this album and you can only conclude that every song represents its own important place in his life. The changeover of vocalists works extremely well helping the songs gain added individuality through some excellent performances. There is a timeless strength to every song included on The Common Thread, resulting in a collection of the highest quality.

The title song, delivered by Southside Johnny, explains the whole ethos of the album and as the pieces do indeed come together we are left enjoying and experiencing a journey through the modest Mr Reid’s accomplished work. There are too many stand-out moments with every musician contributing perfectly relevant performances. ‘The human is a monkey with a diseased brain’, sings Chaz Jankel, on The Only Monkey, a song that, despite its upbeat tempo, is guaranteed to make you feel uncomfortable. The range of material is extraordinarily effective and a moving ballad, It Might Be Your Heart sung by Chris Thompson follows. The remarkable Terry Reid’s performance on Too Close To Call is simply wonderful.

If there is a common thread running through this album that we can take away with us, then it can be summed up in one word – quality. Keith Reid has already guaranteed his place in the history of music with some of the best known songs of a generation. With The Common Thread, he underlines exactly how he earned that right with a collection of songs that have something for everyone.