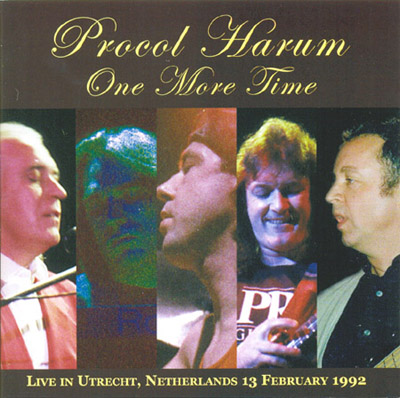 After a long fifteen-year hiatus, Procol Harum reformed and released The Prodigal Stranger album in 1991. Its four founding members Gary Brooker, Keith Reid, Robin Trower and Matthew Fisher were all aboard for the sessions, and a tour ensued to help support the newly released album. Robin Trower didn’t tour with the newly reformed band. At first Tim Renwick filled in, and then permanent replacement Geoff Whitehorn became Procol’s guitarist. Big Country’s Mark Brzezicki handled the drums in place of the late B.J. Wilson, and bassist Dave Bronze helped complete the band. As the concert itinerary unfolded, Procol Harum’s One More Time – Live In Utrecht, Netherlands was recorded as a true document of that historic first tour.

From the beginning to the end, you get nothing but classic Procol Harum as it begins with the rocking Bringing Home the Bacon from the Grand Hotel (Friday Music 1020) album. As the fans yearn for more classics, the boys reach back to 1968 and recreate the magic from the era with Shine On Brightly. Geoff Whitehorn’s searing guitar lead compliments [sic] Matthew Fisher’s Hammond B3 as the crowd is moved to its feet.

Gary Brooker’s solemn vocals and new arrangement on their second hit single Homburg gets the five star treatment here. Complete with Keith Reid’s imagery and Brooker’s piano phrasing, Homburg would go on to be a fan favorite for over three decades.

The Prodigal Stranger album gets a nice serving here with wonderful renditions of The King Of Hearts, Man With A Mission, One More Time and their comeback smash All Our Dreams Are Sold.

The Utrecht concert would not be complete without more Procol Harum classics like Whisky Train from their fourth effort Home. This time Whitehorn’s guitar gets a blues workout with the rhythm section provided by Brzezicki and Bronze. More favorites like the stunning Grand Hotel, Whaling Stories and A Salty Dog helped make this particular concert recording a very rewarding document of that eventful evening in February 13, 1992. [sic]

Friday Music and Procol Harum are very proud to issue One More Time for the first time in North America. As another installment in our Procol Harum Remasters program, this very rare album was originally released as a fan club only record in Europe on the Gazza label. With careful restoration from Gary Brooker’s vaults, One More Time has secured its place as another incredible chapter in the career of Procol Harum. Cheers!