Re-released and remastered by Friday Music, 2004

Liner Note
On September 28, 1996, Procol Harums Gary Brooker organized a concert to help raise money for the historic 13th Century church of St Mary & All Saints in Surrey, England. He not only chose some of his finest musician friends to help out with the cause, but he also went on to record the event and release it on a fan club CD in a very limited run of 1,000 units. This rare 1996 Gazza release Within Our House went on to become a highly collectable recording, when the obvious happened as it sold out rather quickly. However, from the vaults of Gary Brookers Gazza archives, Friday Music is now releasing this impeccable live recording, newly remastered and for the first time ever in North America. 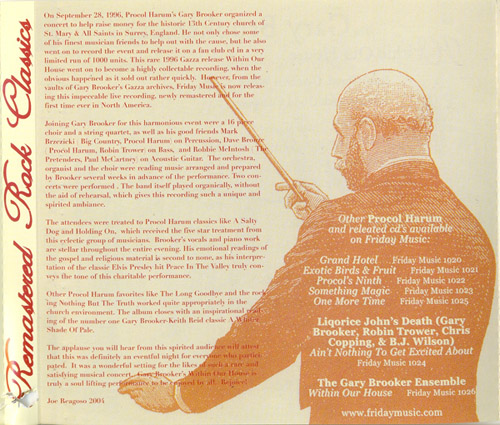 Joining Gary Brooker for this harmonious event were a 16 piece choir and a string quartet, as well as his good friends Mark Brzezicki (Big Country, Procol Harum) on Percussion, Dave Bronze (Procol Harum, Robin Trower) on Bass, and Robbie McIntosh (The Pretenders, Paul McCartney) on Acoustic Guitar. The orchestra, organist and the choir were reading music arranged and prepared by Brooker several weeks in advance of the performance. Two concerts were performed. The band itself played organically, without the aid of rehearsal [?], which gives this recording such a unique and spirited ambiance.

The attendees were treated to Procol Harum classics like A Salty Dog and Holding On, which received the five star treatment from this eclectic group of musicians. Brookers vocals and piano work are stellar throughout the entire evening. His emotional readings of the gospel and religious material is second to none, as his interpretation of the classic Elvis Presley hit Peace In The Valley truly conveys the tone of this charitable performance.

Other Procol Harum favorites like The Long Goodbye and the rocking Nothing But The Truth worked quite appropriately in the church environment. The album closes with an inspirational reading of the number one Gary Brooker-Keith Reid classic A Whiter Shade of Pale.

The applause you will hear from this spirited audience will attest that this was definitely an eventful night for everyone who participated. It was a wonderful setting for the likes of such a rare and satisfying musical concert. Gary Brookers Within Our House is truly a soul lifting performance to be enjoyed by all. Rejoice! 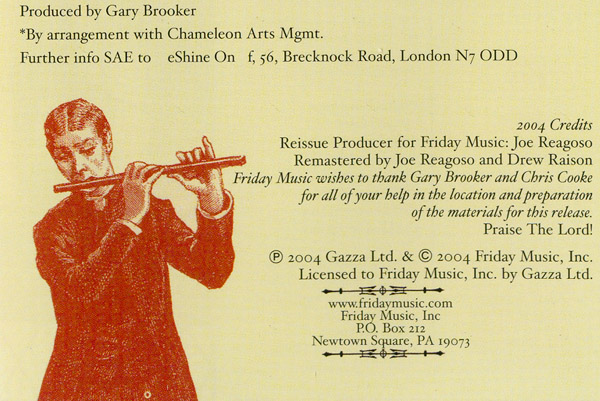 Something has gone a bit funny in the Shine On department, but the address is sound

Order this CD from Amazon USA

Order this CD from Amazon UK

Order this CD from Amazon Germany

Order this CD from Amazon Canada