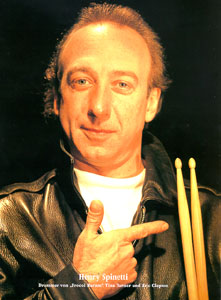 Henry was born in the small mining village of Cwm, South Wales, his father Italian and his mother Welsh. He started playing drums at the age of twelve, after hearing The Beatles and deciding this was what he wanted to do. He went professional at the age of sixteen and has never looked back.

Henry has worked in all areas of the music business - concerts, recording on over fifty albums, film music, TV and Radio, and has played with a never-ending list of artists, including Paul McCartney, George Harrison, Eric Clapton, Tina Turner, Joan Armatrading, Gary Brooker, and Andy Fairweather-Low.

Henry is one of the finest drummers Britain has produced, and is recognised as such all over the world. His drumming is unique, combining skill, versatility and a musical feel rarely found, which is much revered. His main musical influences have been R&B and Tamla Motown. He played on Gerry Rafferty's Baker Street from the City to City album, and helped make it one of the most famous singles of all time.

Henry is a true professional whose talent will always be admired and appreciated. Despite his success he remains unassuming and continues to put his heart and soul into playing, hopefully for many more years to come.

Television appearances include: Top Of The Pops;

Thanks to Henry and Susie for the information on this page