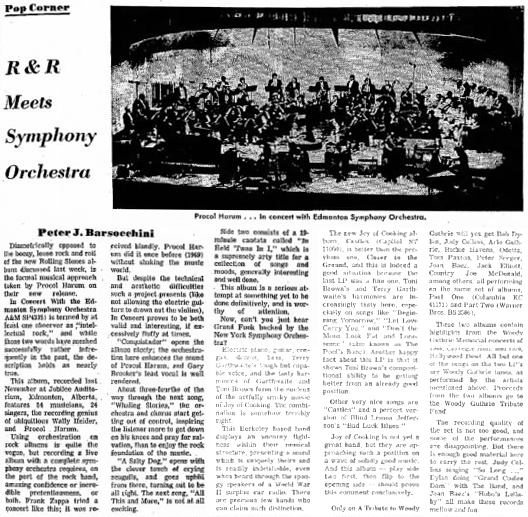 Diametrically opposed to the boozy, loose rock and roll of the new Rolling Stones album discussed last week, is the formal musical approach taken by Procol Harum on their new release.

In Concert With the Edmonton Symphony Orchestra (A&M SP4335) is termed by at least one observer as ‘intellectual rock’, and while those two words have meshed successfully rather infrequently in the past, the description holds as nearly true.

Using orchestration on rock albums is quite the vogue, but recording a live album with a complete symphony orchestra requires, on the part of the rock hand, amazing confidence or incredible pretentiousness, or both. Frank Zappa tried a concert like this; it was received blandly. Procol Harum did it once before (1969) without shaking the music world.

But, despite the technical and aesthetic difficulties such a project presents (like not allowing the electric guitars to drown out the violins), In Concert proves to be both valid and interesting, if excessively fluffy at times.

About three-fourths of the way through the next song, Whaling Stones, the orchestra and chorus start getting out of control, inspiring the listener more to get down on his knees and pray for salvation, than to enjoy the rock foundation of the music.

A Salty Dog, opens with the clever touch of crying seagulls, and goes uphill from there, turning out to be all right. The next song, All This and More, is not at all exciting.

Side two consists of a 19-minute cantata called In Held ’Twas In I, which is a supremely arty title for a collection of songs and moods, generally interesting and well done.

This album is a serious attempt at something yet to be done definitively, and is worthy of attention.