Procol Harum and the Edmonton Symphony Orchestra: breaking the barricades

It was awfully cold in Edmonton that morning. A Canadian oil refinery city with 400,000 people, weather not exactly conducive to the postcard industry, and a Holiday Inn boasting the most flavorless eggs and bacon in all of Alberta, Edmonton seemed the last place in the world for a rock concert, let alone the home of a symphony orchestra. But over at the Jubilee Auditorium, something big was brewing, This wasn't just any rock concert. This was Procol Harum, at 9 am rehearsing with the Edmonton Symphony Orchestra for what promised to be the Canadian musical event of the year, and the city knew it. 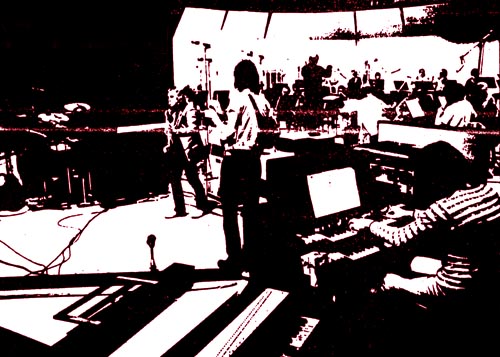 Anticipation for the symphony-rock performance had been building for several months, and tickets for the Procol date sold out two weeks in advance, a new concert hall record. What tickets were on the streets were going for 20 to 30 dollars a throw. Even some of the Edmonton Symphony's well-fed "patrons" were lucky to secure balcony seats – and only then by exerting the necessary pressure. On the crowded stage at the Jubilee, the musicians, all union members, and all very prompt, had weaved [sic] their way obediently through rows of chairs and added speaker monitors, and had taken their places.

In the equally crowded "green room" 30 feet off-stage, Los Angeles sound man extraordinaire Wally Heider hovered over an immense, almost intimidating 16-track portable board which had been trucked in for the event, and watched a TV monitor of the rehearsal action. Above Heider sat four large speakers, monitoring the horns, the violins, the percussion instruments, and Procol Harum.

In the empty, wood-paneled auditorium, there was a visible tension as rehearsal became a race against the union clock and the nervous realization that the concert, besides being the group's next album, would be the third such live concert recording ever made with a rock band and symphony, in addition to being the first ever done on 16-track.

Sound was the first problem. During the first run of Whaling Stories neither the orchestra nor the da Camera Singers were heard above the amplification of Dave Ball's guitar and BJ Wilson's drums. Pianist Gary Brooker begged, "Can you get some more orchestra in the monitors – we can't hear them." The monitors were turned up.

Language was the second obstacle. The orchestra read and talked musical symbols, Procol was used to "sets," and "solos." So Brooker, who had also done all the arrangements, devised a simpler method. He had 13 symbols drawn on a sheet of paper in front of him on the piano. "I know what I'll do," he explained. "I just say 'man' eight times, 'dog' eight times, then 'bat,' 'tree,' and so on." It was certainly an awkward translation, but when conductor Lawrence Leonard suggested that the orchestra drop four bars from the coda of one of the songs, chances are Brooker dropped a 'bat' or a 'tree.'

Coordination was the third barrier. At first during rehearsals, there was the physical handicap that the band was located in front of both orchestra and conductor. While organist Chris Copping and Brooker merely had to look up for their cues, drummer Wilson could not. And so, in the final moments of the last run-through, just when I felt they had thought of everything, they added a final funny touch: a truck-size rear-view mirror for BJ attached to his microphone stand.

Yet that was as funny as rehearsal ever became. The serious determination attached to the concert was most refreshing. And Procol Harum's display of disciplined musicianship, especially in rehearsal, made their performance so much more important.

By 11.30 a.m, Brooker still wasn't satisfied, and the group opted for an additional one hour with the orchestra. "Embellishment is out this time," symphony assistant general manager Bob Hunka had said in describing the orchestra's role. "They're a separate entity. Gary feels the orchestra is a unique group and lets them do their own thing."

And, at hour's end, Hunka's analysis was beginning to hold true. Both Procol and the Symphony were getting it all together, complementing each other on some numbers, and contrasting beautifully on others. And for the first time the group, with its massive array of tweeters, horns, boxes, and a giant Leslie speaker on stage, didn't outplay the symphony, and surprisingly, despite the amplification, they didn't drown the violins and 'cellos.

Precisely at 12.30 the orchestra walked off the stage. But Procol stayed behind awhile, pacing, smoking anxiously, and discussing. BJ walked into the "green room," where Heider was running the two tape machines and the board through their final chores before giving them a four hour recess – four hours before Procol's massive financial and musical investment in their future would either materialize or literally fall apart before a highly critical audience. "I really think it's going to be good," Wilson said. He paused, scratched his head and laughed nervously. "Let's face it. It's just gotta be good."

Back at the Holiday Inn, Brooker sat down to a hurried, half-digested meal of Edmonton's specialty, "steak au bland," and discussed how he had scored the music. "I'm not very good at it," he confessed, "s'why it took me so long." Brooker, who boasted he had just obtained (second-hand) a 1940s book on Arranging for Dance Band and Radio Orchestra," took six weeks to finish In Held 'Twas in I, but only four days to do Conquistador. Two hours to go. Copping tried to eat but couldn't, and Dave Ball and Alan Cartwright (bass) were nowhere to be found.

At the Jubilee, the audience, forewarned that they would be witnessing a live recording, arrived unusually early for the historic event. It was a largely age-integrated audience, with most of the younger crowd coming from the large (18,000) Edmonton College conveniently located two blocks away.

Interestingly, one of the unique things about Procol Harum has also seemed to make their audiences unique. Procol is a group that hasn't had a hit single [sic]since the release of their Whiter Shade of Pale in 1967. Yet their audiences never cease to be hard core fanatics who don't recognize a top 40 single but instead scream out specific Procol album cuts for the group to play. Procol doesn't attract the blind groupies – it attracts the thinkers.

I remember watching the audience at the Santa Monica Civic for the group's last concert there in August. They knew when to applaud and when to listen and to what. The crowd at Edmonton could easily have been the same Santa Monica fans, with one notable exception: chances were in Edmonton the guy sitting next to you wasn't smoking a joint.

In the crowded "green room" 20 minutes before the show, sun-glassed songwriter Keith Reid clutched his script tightly for his surprise reading part later in the performance of In Held 'Twas in I. In another corner of the room, Gary Brooker stood, with Chris Copping looking over his shoulder asking short, last-minute questions about his tricky organ solo arrangement which would open the show.

Suddenly, after a total of four rehearsal hours, it happened. The "green room" hushed almost instantly as Copping went on stage to play Tomaso Albinoni' s Adagio for Strings and Organ, and the remaining members of the group, like medical students uneasily watching their first operation, stood, arms folded, eyes and ears glued to the TV and sound monitors.

The mostly young audience, new to the protocol of symphony, seemed tempted at times to applaud after a solo violin "set," but luckily thought twice.

The group's first number, Conquistador, was shaky. BJ was still slightly ahead of the orchestra, and it wasn't until the shrill, piercing Shine on Brightly that Procol felt and sounded comfortable on stage. BJ's drum was loud, but not overly dominating 'as I had previously feared it would be.

To the pounding rhythm of Simple Sister, the orchestra added some nice background touches, with the pizzicato violins plucking lightly initially, and the horns building up to a final crescendo that was truly uplifting. In Salty Dog the sound men were even equipped with a tape of seagulls to begin and end the piece. The orchestra did things Procol couldn't (and didn't) do in the studio themselves.

Dave Ball's guitar solo in Simple Sister was inspired, and Alan Cartwright's bass remained reassuringly steady throughout the performance. For both musicians, it was their first recording with Procol since they had been added to the group at the beginning of last summer.

All This and More was the weak link in the concert, as for the first time the orchestra's arrangement was parallel to the group's, and hence, the song went almost unnoticed. Yet the two exciting numbers of the earlier rehearsals remained the highlights of the performance – Whaling Stories and In Held 'Twas in I, where Brooker made good comic use of the chorus. (The members of the chorus certainly seemed to be enjoying themselves, although at the last moment they decided not to wear the colorful Salty Dog T-shirts the group had provided, and instead dressed in more conservative garb.)

Brooker's arrangement for Whaling Stories was his most creative of the evening, consisting of a loud mixture of guitar, 'cello, chorus and cannon sounds for the storm at sea, followed by a becalmed daybreak announced convincingly by clarinet, flute and piccolo.

The surprise of the evening was Reid's narrative appearance during In Held 'Twas in I. Reid, his voice noticeably shaking, provided the verbal tension; the chorus the comic relief; and the musicians the fiery climax to the cantata, which ended the performance to a warm and well-deserved standing ovation.

And while the audience was demanding an encore, Wally Heider had a few personal requests himself. Thus the group returned on stage to repeat (and vindicate) two of the earlier nervous songs of the evening, Conquistador and Whaling Stories.

The encore, for the audience, turned into what the evening had been all along – a full-fledged recording session, complete with orchestra, rock group and over 2,700 A&R people who listened intently to two more takes of Whaling Stories completed to another standing ovation. The audience, as was obvious, was quite happy to help cut the vinyl.

But just as the audience was expecting a new number to round out the concert a t the end, Brooker repeated In Held, and a noticeable murmur snaked through the audience. While they were more than happy to cooperate, and while they all knew they were part of the recording, they didn't want to feel used. Yet when Reid reappeared for his reading, his voice no longer quivering, the crowd respectfully gave its silent approval. And with the circus antics of the choir lifting their spirits, most of the audience left Jubilee with a feeling of a job well done.

As soon as they were off stage, Procol headed straight for the "green room" to hear the recording word from Heider, which was most positive. Manager Derek Sutton, who deserved most of the organizational credit for the performance, ran excitedly downstairs to remove a case of champagne he had tucked away, and started popping corks.

Guitarists Ball and Cartwright sat down for the first time in two hours. "We were recording and playing to an audience at the same time," Ball quietly complained. "And it was hard to relate to both at once. But," he smiled, "it was worth it."

Chris Copping was wearing the relieved smile of a small child who had just finished his first piano recital before his relatives. "You know, it was a very delicate thing. I think it could have been a better concert for the people," Copping felt. "But we've got an album now."

Procol Harum is a group that has always moved writers to write. They are as cryptic and as mysterious as the words they sing. Yet one thing was clear about that night in Edmonton. It was an evening of uncompromised symphony and intellectual rock. And it was great.