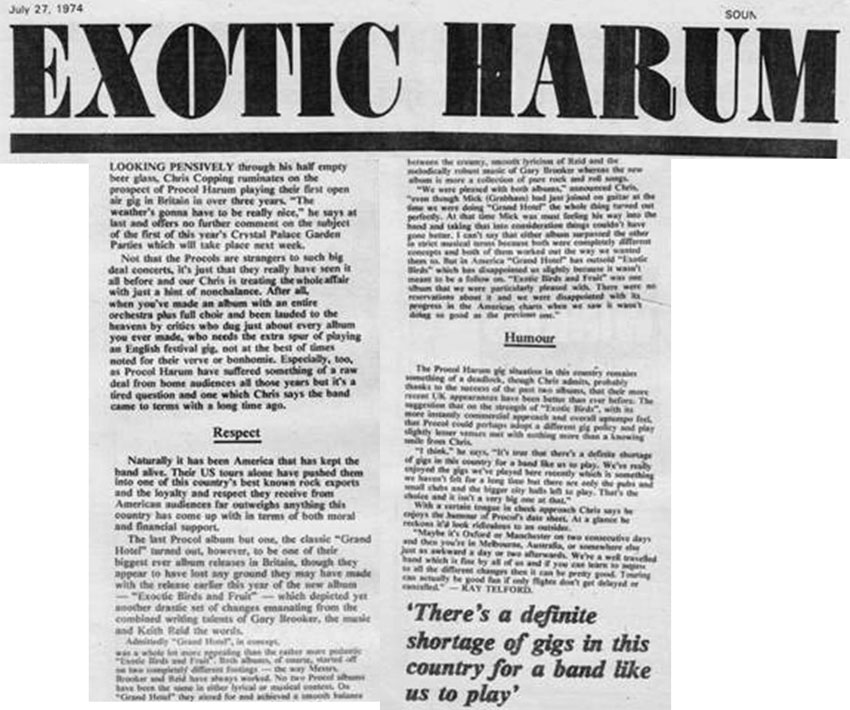 Looking pensively through his half empty beer glass, Chris Copping ruminates on the prospect of Procol Harum playing their first open air gig in Britain in over three years. “The weather’s gonna have to be really nice,” he says at last and offers no further comment on the subject of the first of this year’s Crystal Palace Garden Parties which will take place next week.

Not that the Procols are strangers to such big deal concerts, it’s just that they really have seen it all before and our Chris is treating the whole affair with just a hint of nonchalance. After all, when you’ve made an album with an entire orchestra plus full choir and been lauded to the heavens by critics who dug just about every album you ever made, who needs the extra spur of playing an English festival gig, not at the best of times noted for their verve or bonhomie. Especially, too, as Procol Harum have suffered something of a raw deal from home audiences all those years but it’s a tired question and one which Chris says the band came to terms with a long time ago.

Naturally it has been America that has kept the band alive. Their US tours alone have pushed them into one of this country’s best known rock exports and the loyalty and respect they receive from American audiences far outweighs anything this country has come up with in terms of both moral and financial support.

The last Procol album but one, the classic Grand Hotel turned out, however, to be one of their biggest ever album releases in Britain, though they appear to have lost any ground they have made with the release earlier this year of the new album – Exotic Birds And Fruit – which depicted yet another drastic set of changes emanating from the combined writing talents of Gary Brooker, the music and Keith Reid the words.

Admittedly “Grand Hotel, in concept, was a whole lot more appealing than the rather more pedantic Exotic Birds And Fruit”. Both albums, of course, started off on two completely different footings – the way Messrs. Brooker and Reid have always worked. No two Procol albums have been the same in either lyrical or musical content. On Grand Hotel they aimed for and achieved a smooth balance between the creamy, smooth lyricism of Reid and the melodically robust music of Gary Brooker whereas the new album is more a collection of pure rock and roll songs.

“We were pleased with both albums,” announced Chris, “even though Mick (Grabham) had just joined on guitar at the time we were doing Grand Hotel the whole thing turned out perfectly. At that time Mick was must feeling his way into the band and taking that into consideration things couldn’t have gone better. I can’t say that either album surpassed the other in strict musical terms because both were completely different concepts and both of them worked out the way we wanted them to. But in America Grand Hotel has outsold Exotic Birds which has disappointed us slightly because it wasn’t meant to be a follow on. Exotic Birds And Fruit was one album that we were particularly pleased with. There were no reservations about it and we were disappointed with its progress in the American charts when we saw it wasn’t doing so good as the previous one.”

The Procol Harum gig situation in this country remains something of a deadlock, though Chris admits, probably thanks to the success of the past two albums, that their more recent UK appearances have been better than ever before. The suggestion that on the strength of Exotic Birds, with its more instantly commercial approach and overall uptempo feel, that Procol could perhaps adopt a different gig policy and play slightly lesser venues met with nothing more than a knowing smile from Chris.

“I think,” he says, “it’s true that there’s a definite shortage of gigs in this country for a band like us to play. We’ve really enjoyed the gigs we’ve played here recently which is something we haven’t felt for a long time but there are only the pubs and small clubs and the bigger city halls left to play. That’s the choice, and it isn’t a very big one at that.”

With a certain tongue-in-cheek approach Chris says he enjoys the humour of Procol’s date sheet. At a glance he reckons it look ridiculous to an outsider.

“Maybe it’s Oxford or Manchester on two consecutive days and then you’re in Melbourne, Australia or somewhere else just as awkward a day or two afterwards. We’re a well-travelled band which is fine by all of us and if you can learn to adjust to all the different changes then it can be pretty good. Touring can actually be good fun if only flights don’t get delayed or cancelled.”

Thanks, Per, for the scan and the transcript