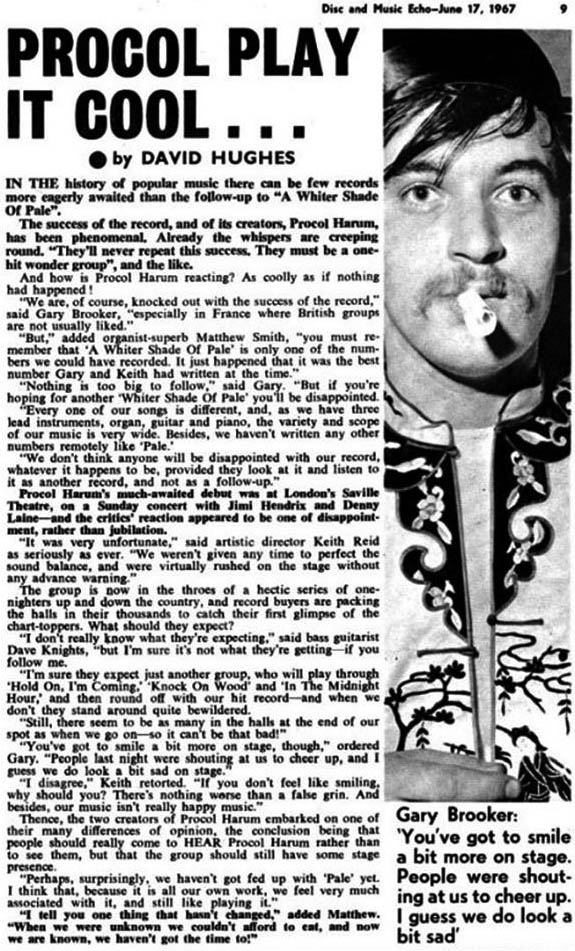 In the history of popular music there can be few records more eagerly awaited than the follow-up to A Whiter Shade of Pale.

The success of the record, and of its creators, Procol Harum, has been phenomenal. Already the whispers are creeping round. ‘They’ll never repeat this success. They must be a one-hit wonder group,’ and the like.

And how is Procol Harum reacting? As coolly as if nothing had happened!

‘We are, of course, knocked out with the success of the record,’ said Gary Brooker, ‘especially in France where British groups are not usually liked.’

‘But,’ added organist-superb Matthew Smith [ie Fisher, 'Matthew Celestial Smith'], ‘you must remember that A Whiter Shade of Pale is only one of the numbers we could have recorded. It just happened that it was the best number Gary and Keith had written at the time.’

‘Nothing is too big to follow,’ said Gary. ‘But if you’re hoping for another Whiter Shade of Pale you’ll be disappointed.

‘Every one of our songs is different, and, as we have three lead instruments, organ, guitar and piano, the variety and scope of our music is very wide. Besides, we haven’t written any other numbers remotely like Pale.

‘We don’t think anyone will be disappointed with our record, whatever it happens to be, provided they look at it and listen to it as another record, and not as a follow-up.’

Procol Harum’s much-awaited début was at London’s Savile Theatre, on a Sunday concert with Jimi Hendrix and Denny Laine—and the critics’ reaction appeared to be one of disappointment, rather than jubilation.

‘It was very unfortunate,’ said artistic director Keith Reid as seriously as ever. ‘We weren’t given any time to perfect the sound balance, and were virtually rushed on the stage without any advance warning.’

The group is now in the throes of a hectic series of one-nighters up and down the country, and record buyers are packing the halls in their thousands to catch their first glimpse of the chart-toppers. What should they expect?

‘I don’t really know what they’re expecting,’ said bass guitarist Dave Knights, ‘but I’m sure it’s not what they’re getting—if you follow me.’

‘I’m sure they expect just another group, that will play through Hold On, I’m Coming, Knock on Wood and In the Midnight Hour, and then round off with our hit record—and when we don’t, they stand around quite bewildered.

‘Still, there seem to be as many in the halls at the end of our spot as when we go on—so it can’t be that bad!’

‘You’ve got to smile a bit more on stage, though,’ ordered Gary. ‘People last night were shouting at us to cheer up, and I guess we do look a bit sad on stage.’

‘I disagree,’ Keith retorted. ‘If you don’t feel like smiling. why should you? There’s nothing worse than a fake grin. And besides, our music isn’t really happy music.’

Thence, the two creators of Procol Harum embarked on one of their many differences of opinion, the conclusion being that people should really come to HEAR Procol Harum rather than to see them, but that the group should still have some stage presence.

‘Perhaps. surprisingly, we haven’t got fed up with Pale yet. I think that, because it is all our own work, we feel very much associated with it, and still like playing it.’

‘I tell you one thing that hasn’t changed,’ added Matthew. ‘When we were unknown we couldn’t afford to eat, and now we are known, we haven’t got the time to!’