Harum are home again – and won’t stay in the shade

Nearly three years ago A Whiter Shade of Pale knocked the world sideways. It rocketed to the top of the chart and stayed there for six weeks until toppled by the Beatles. It became the theme tune of an era – that long, hot flowery summer of UFO, beads and Sergeant Pepper. And even now, it still sells 1,000 copies a week in America. 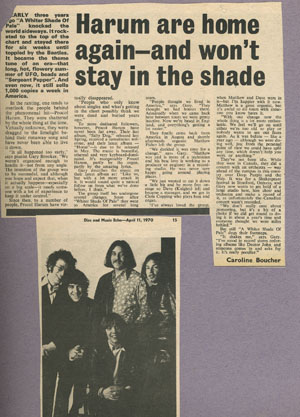 In the ranting, one tends to overlook the people behind the phenomenal hit – Procol Harum. They were shattered by the whole thing at the time. Virtually unknown, they were dragged to the limelight behind their runaway song and have never been able to live it down. 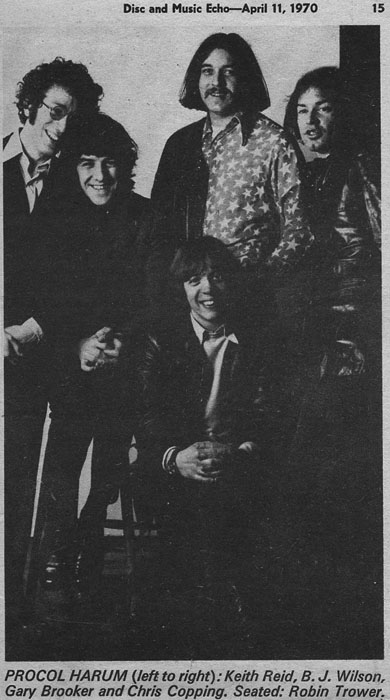 “It all happened too early,” says pianist Gary Brooker. “We weren’t organised enough to handle it – not from any angle. The intention of the group was to be successful, and although you hope and expect that, when it actually happens – especially on a big scale – it needs someone with a lot of experience to keep it under control."

Since then, to a number of people, Procol Harum have virtually disappeared.

“People who only know about singles and what’s getting in the chart possibly think we were dead and buried years ago.”

To more dedicated followers, however, Procol Harum have never been far away. Their last album, Salty Dog, released last Spring, received a tumultuous welcome, and their latest album, Home, is due to be released in May. The music is beautiful, ethereal and very keyboard-dominated. It’s recognisably Procol Harum, partly by the organ, partly by the amazing lyrics.

Gary describes the music on their latest album as: “Like us, but with a lot more attack in it. It would sound quite a natural follow on from what we’ve done before, I think.”

The group itself has undergone several changes. Soon after Whiter Shade of Pale they went to America for several long tours.

“People thought we lived in America,” says Gary. “They thought we had houses there. Admittedly when we came back here between tours we were pretty inactive. Now we’re based in England, and everything’s getting a lot easier.”

They finally came back from America in August and shortly afterwards organist Matthew Fisher left the group.

“We decided it was time for a change,” says Gary. “Matthew was and is more of a technician and his best love is working as a producer or engineer in a recording studio. He was never very happy going around playing places.

“We just wanted to cut it down a little bit and be more free onstage so Dave (Knights) left and became a manager, and we got in Chris Copping, who plays bass and organ.

“I’ve always loved the group when Matthew and Dave were in it – but I’m happier with it now. Matthew is a great organist, but it’s awful to do tours with someone you know hates it.

“With our change now the whole thing is more enthusiastic. We feel we’ll go on until either we’re too old to play or nobody wants to see our faces again. As it was before – like a year ago – although we were doing well, just from the personal point of view we could have split any time, which doesn’t help you work or anything."

They’ve not been idle. While they were in Canada, they did a concert with an orchestra – way ahead of the rumpus in this country over Deep Purple and The Nice. It was for a Shakespeare festival in Stratford, Ontario, and Gary now wants to get hold of a large studio here, hire choir and orchestra and make a record of it, as unfortunately the Canadian concert wasn’t recorded.

“We don’t really care about pioneering, but it’s a bit of a choke if we did get round to doing it in about a year’s time and everyone thought we were miles behind.”

But still A Whiter Shade of Pale dogs their footsteps.

“It shakes me,” says Gary. “I’ve stood in record stores ordering albums like Doctor John, and someone comes in and asks for it. It’s really peculiar.”