Cathy and Bob tell their tale

I'm so glad Gary, Keith, Matthew and Robin are able to see such a detailed computer magazine handled with such loving care. 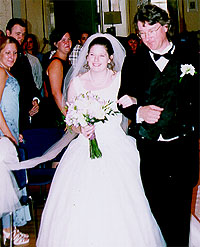 My husband Robert and I have been together for 25 years. Procol Harum was and is such a part of our life. Keith Reid doesn't know it but he wrote Salty Dog about the birth of our only child, Jenevieve Fluer. Whiter Shade of Pale has been our song forever, though we don't mind sharing it with others!

We were friends with lots of local bands, because we did posters, and we were kind of local 'hipsters'. Jeni grew up thinking these people were her aunts and uncles. Until she was about six she thought that Gary was one of her uncles! She had her own Salty Dog ... but that's another story.

Jenevieve was married this year and entered with Whiter Shade of Pale as her mother before her [see illustration]. Salty Dog was played in the middle of the ceremony so Procol was there. I just thought this was a fun story.

My husband is an illustrator. Without much prejudice ... he's brilliant. As with song writers, artists at times run dry. A short story just can't be visualised in their minds. That's when I try and help finding copies of reference drawings or music.

Sometimes being on the outside of a problem looking in is helpful. There are a few of Bob's drawings that are called one thing or another but really could be called, Whiter Shade of Pale (he won 3 awards for that) Repent Walpurgis, and Grand Hotel. The most amazing one was inspired by Conquistador. Work for an artist is feast or fathom. Bob had a three-page graphic story that ran every month. Besides that he had two illustrations, due for another magazine. 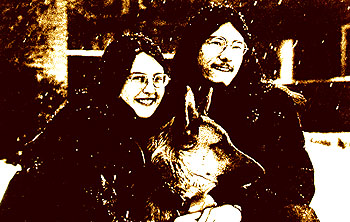 Then a call came from an editor saying the author of the feature story that month would not release her story without confirmation that Bob would do the main illustration.

Now Bob is a hard worker. He was the art director of an underground newspaper in Chicago when we first met and I saw him stay up many times for 48 hours straight. Art is not like other kinds of work. It has to come from the inside out.

While Bob worked on his other projects I started digging for illustrations that would work as an inspiration. Something. Anything.

I was about to give up when things fell into place. I made a tape with Conquistador playing over and over. Bob not only came up with a wonderful idea, but he won five awards for the same. As soon as I can figure out our scanner I'll send it to you [see below].

Gary and Keith planted these seeds so long ago and still they bear fruit.

Yours, standing with my shoes laced up wrong
Cathy