THis very serious-minded earlyt article about acamndics and rock music mnakes fascinating reading [it also made fascinating typing ... Ed] especially for the way in which someone in the Procol camp has mercilessly subveryted it with misinformnation

The turn of a knob, the pulsating sound of amplified feedback and the intensity of a psychedelic light show all combine to form the general impression of a pop concert. The sweat of hard guitar playing, the confusion of an inspired drum solo and the hoarseness of a blues singer also contribute to the modern phenomenon known as pop music.

Coming from all corners of the globe, many of the leadihg exponents of this musical genre will be present on campus the week of 30 September. They range from the harsh sounding Big Brother and The Holding Company to the soft melodic voice of Eric Andersen. 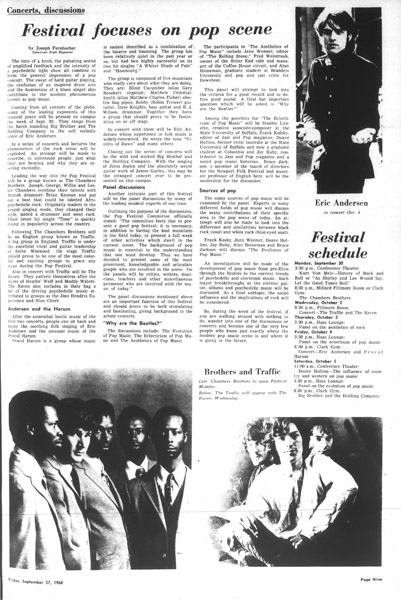 In a series of concerts and lectures the phenomenon of the rock scene will be exploded. An attempt will be made to describe, to interested people, just what they are hearing and why they are reacting excitedly.

Leading the way into the Pop Festival will be a group known as The Chambers Brothers. Joseph, George, Willie and Lester Chambers combine their talents with British drummer Brian Keenan and put out a beat that could be labeled Afro-psychedelic rock. Originally leaders in the gospel singing mode, they changed their style, added a drummer and went rock. Their latest hit single Time is quickly rising in popularity across the country.

Following The Chambers Brothers will be an English group known as Traffic. A big group in England, Traffic is under the excellent vocal and guitar leadership of Steve Winwood. On stage Traffic should prove to be one of the most colorful and exciting groups to grace any stage during the Pop Festival.

Also in concert with Traffic will be The Raven. They pattern themselves after the styles of Howlin' Wolf and Muddy Waters. The Raven also includes in their bag a hint of the driving psychedelic music attributed to groups as the Jimi Hendrix Experience and Blue Cheer.

Andersen and the Harum

After the somewhat hectic music of .the first two concerts, people can sit back and enjoy the soothing folk singing of Eric Andersen and the unusual music of the Procol Harum. Procol Harum is a group whose music is easiest described as a combination of the bizarre and haunting. The group has been relatively quiet in the past year or so, but had been highly successful on its two hit singles A Whiter Shade of Pale and Hombourg [sic].

The group is composed of five musicians who really care about what they are doing. They are: Blind Cucumber (alias Gary Brooker) organist; Matthew Celestial-Smith (alias Matthew Charles Fisher) electric bag pipes; Robby (Robin Trower) guitarist; Dave Knights, bass guitar and BJ Wilson, drummer. Together they form a group that should prove to be fascinating on or off stage.

In concert with them will be Eric Andersen whose experience in folk music is widely-renowned. He wrote the tune Violets of Dawn and many others.

Closing out the series of concerts will be the wild and wicked Big Brother and the Holding Company. With the singing of Janis Joplin and the absolutely weird guitar work of James Gurley, this may be the strangest concert ever to be presented on this campus.

Another intricate part of this festival will be the panel discussions by many of the leading musical experts of our time.

Outlining the purpose of the discussions, the Pop Festival Committee officially stated: "The committee feels that to present a good pop festival, it is necessary, in addition to having the best musicians in the field today, to present a full week of other activities which dwell in the current scene. The background of pop music is essential to the understanding that one must develop. Thus we have decided to present some of the most prominent, knowledgeable and articulate people who are involved in the scene. On the panels will be critics, writers, musicians, teachers and other miscellaneous personnel who are involved with the music of today."

The panel discussions mentioned above are an important function of this festival and should prove to be both stimulating and fascinating, giving background to the actual concerts.

"Why are the Beatles?"

The participants in "The Aesthetics of Pop Music" include Jann Wenner, editor of The [sic] Rolling Stone; Fred Weintraub, owner of the Bitter End cafee and manager of the Coffee House circuit, and Alan Heineman, graduate student at Brandeis University and pop and jazz critic for Downbeat.

This panel will attempt to look into the criteria for a good record and to define good sound. A final but important question which will be asked is "Why are the Beatles?"

Among the panelists for "The Eclecticism of Pop Music" will be Stanley Lunette, creative associate-composer at the State University of Buffalo, Frank Kofsky, editor of Jazz and Pop magazine, Doane Hollins, former critic laureate at the State University of Buffalo and now a graduate student at Columbia and Jay Ruby, contributor to Jazz and Pop magazine and a noted pop music historian. Bruce Jackson, a member of the board of directors for the Newport Folk Festival and associate professor of English here, will be the moderator for the discussion.

The many sources of pop music will be examined by the panel. Experts in many different fields of pop music will discuss the many contributions of their specific area to the pop scene of today. An attempt will also be made to look into the difference and similarities between black rock (soul) and white rock (blue-eyed soul). Frank Kosky, Jann Wenner, Doane Hol-lins, Jay Ruby, Alan Heineman and Bruce Jackson will discuss "The Evolution of Pop Music."

An investigation will be made of the development of pop music from pre-Elvis through the Beatles to the current trends of psychedelic and electronic music. Such major breakthroughs as the electric guitar, albums and psychedelic music will be discussed. As a final subtopic, the social influence and the implications of rock will be considered.

So, during the week of the festival, if you are walking around with nothing to do, wander into one of the discussions or concerts and become one of the very few people who know just exactly where the modern pop music scene is and where it is going in the future.