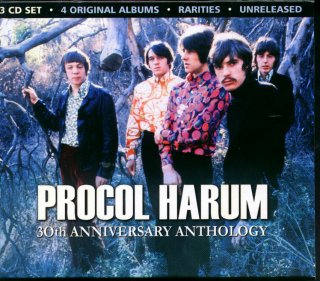 As a long-term Procol Harum fan, I always skim the music stores for new CDs from Procol Harum. I search the Internet online stores, and read the music magazines as I hope to find something new and listenable from the band. Last year's re-issues of some of their last albums was great, as it offered an opportunity to get them on the more user-friendly CD format. Then came The Long Goodbye – The Symphonic Music of Procol Harum and Within our House, the live recording from Gary Brooker's church concert. 1996 was a promising year for us all.

On the Internet the Procol Harum community began to ask for a Procol Harum boxed set, and the thirty-year anniversary of A Whiter Shade of Pale and of Procol Harum's formation seemed to be a suitable time.

And then, as the big anniversary celebration at Redhill was getting closer, the music magazines started to write about forthcoming re-issues. The German label, Repertoire, was said to be in the process of releasing Procol Harum's first four albums, digitally remastered and with bonus tracks. And the moment we arrived at Redhill, the great news from Mojo Magazine was about a forthcoming 3-CD box set with the four first albums and bonus tracks: a stereo version of A Whiter Shade of Pale was to be the major treat. The nightly conversation in the pub at Lakers Toby Hotel in Redhill those July days raised these fundamental questions several times: what would the bonus tracks be, on the re-issues soon to come? And which of them should you buy? (I guess most of us gathered there would opt for them all, without hesitation). Now we know the answer.

The Repertoire CDs were released first, and, as expected, delivered better sound than on earlier CD releases. The bonus tracks brought little new, except that some of them had not been available on CD before. The stereo version of Homburg is probably the most interesting on the set, while Il Tuo Diamante is also a rarity (both are bonus tracks on the Shine on Brightly CD).

I had great expectations when Westside’s boxed set arrived in the mail. The last years have seen several great boxed sets: The Beach Boys' 30 Years of Good Vibrations and the huge The Beatles Anthology are two well-received examples.

The Procol Harum boxed set has a more modest approach: three CDs in a cardboard box and a 12-page booklet in the first CD. The covers are nice, showing a painting of the Spanish Conquistador and the cover artwork from the original albums. And Henry Scott-Irvine’s liner notes really say what needs to be said. But one can’t help but regret that Westside neglected the possibility of publishing Keith Reid’s wonderful lyrics to these songs, one feature these albums never had. And one can’t expect every Procol Harum fan to have access to the Internet and to this website. I haven’t asked Westside, but maybe copyright problems lie behind this omission.

The first two CDs are occupied with Procol Harum’s first four albums, and the third CD is the promising Rarities CD. I guess most of you will, like me, put this CD in the player first, eager to hear the stereo version of A Whiter Shade of Pale. But let me first dwell for a moment on the other two CDs. 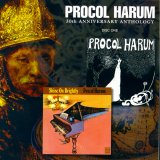 CD One holds Procol Harum's first two albums, Procol Harum and Shine On Brightly. The contents should be well known to visitors of this website. I’ll just say that the track list is the original, without the single A Whiter Shade of Pale. And the artwork shows the original English cover of Shine on Brightly. No surprise here: what really surprised me was the sound-quality. Remastering has been done before, but Tom Moulton and Greg Vaughn at Frankford/Wayne Mastering Labs have done a better job than most. Even the badly-produced Procol Harum album sounds great. Containing maybe Procol Harum's best material, this CD does more justice to the music than has ever been done before. Many have asked for a separate issue of the Rarities CD, without the first four albums. I tell you: you don’t want that. Even if you have bought the first albums before, both on vinyl and CD, you will want this issue. The sound-quality justifies the money spent. 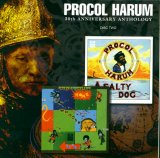 CD Two holds A Salty Dog and Home, without A Salty Dog's title track, which has been moved to CD Three. And this is my only criticism of these two CDs: A Salty Dog should have been in its proper place. But the song was apparently moved because of time restrictions: an unavoidable action. Again I was impressed by the sound quality, and the new details that suddenly were present in the music. 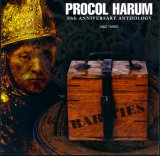 CD Three is obviously the most exciting. It starts out with the singles from that period, A-sides and B-sides from A Whiter Shade of Pale to Long Gone Geek. A Salty Dog is included here in its right context, as it was a single A-side in May ’69. Quite Rightly So (from the Shine On Brightly album) is repeated here, this time in the slightly-different single version.

And then come the rarities: Monsieur Armand and Seem To Have The Blues (Most All The Time)’ are outtakes from Shine on Brightly, recorded in October ’67.  They have both been heard before on the Rock Roots compilation and are also included on the recent Repertoire issue of Procol Harum.

A Whiter Shade of Pale – stereo version – is next. This is a different recording from the released version. It is apparently recorded before the better-known version, and original drummer Bobby Harrison is in the line-up. The originally- released version had session musician Bill Eyden on the drums: the two men's drumming is quite different. This stereo version has been mixed from a four-track master by Tom Moulton. Listening to it, it becomes apparent how far producing techniques have come since ’67. The sound quality is far superior to the original version. Tom Moulton has also mixed the instruments differently: the drums are more crisp, and, most important, Gary Brooker’s piano is audible through Matthew Fisher’s Hammond. This take of AWSoP is played more slowly and laid-back, and Matthew’s Hammond sounds different. I still prefer the original released version of AWSoP, but this stereo version sounds good, and brings new details to the million-seller. This version also has a different ending: there is no fadeout, but the song is terminated with the ending usually played in concerts

And now is time for Karaoke. A previously-unreleased backing track for A Whiter Shade of Pale is next, this time with Bill Eyden on the drums; it must have been recorded on the same day as the released single. It has a different ending, and you can clearly hear Gary’s piano 'honking away' towards the end: obviously not a take intended for release. Although suitable for a singalong, this instrumental track has more to offer: it amplifies the instrumental variations in the song, and it also shows clearly that the song needs Gary’s singing as well as it needs Matthew’s Hammond.

Homburg is on track 3 of this CD, as the A-side of Procol Harum's second single. And here on track 13 is the now not-so-unknown stereo version of Homburg. If you have never listened to it: enjoy. It will give you a better perspective on this top ten single. If you have heard it, you know what I mean.

Track 14 is an earlier take of Homburg and, like the stereo AWSoP, it has been mixed from a four-track tape by Tom Moulton. If you listen carefully during the fadeout on the single version of Homburg you hear Matthew Fisher’s Hammond playing some wonderful chorale like tunes. I always regretted the fadeout, because I wished I could hear more. Now I can! This alternative take has several verses with Matthew playing his wonderful stuff. If Tom Moulton’s mixing of AWSoP gave Gary Brooker's piano more attention, this version of Homburg helps the Hammond to shine. 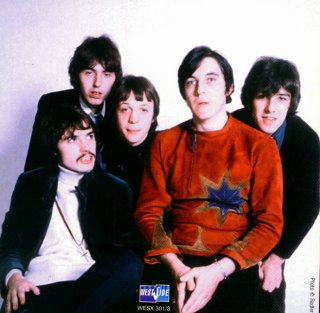 Alternative takes of Conquistador and She Wandered Through The Garden Fence are next, this time in stereo. It makes you wonder whether a stereo version of Procol Harum's first album could be reconstructed with these alternative takes?

The box set concludes with a 1967 version of Magdalene (My Regal Zonophone), the only track that disappoints me with its sound quality. But the liner notes say it has been taken from an acetate, which accounts for the sound [2007: vastly-better sounding version now available from Salvo Records]. And the Beatles Anthology had this acetate quality on most CDs, and still sold millions ... .

Which one should I buy? The Repertoire CD or Westside's Anniversary box set? I would say both. But if you are not a completist like myself, you should settle for the Westside box. The sound-quality is far superior, and the bonus tracks are more exciting. The Online Music store 'CD-Now' lists each of the four Repertoire CDs at $19.99 each, while the Westside box is $40.99. So even from the economical point of view, you should send your money to Westside.

Has Westside more up in its sleeve? I don’t know, but I can always make a wish: give us three more boxed sets, one with Procol Harum’s four next albums and one with the final three CDs. The same recipe should be used: add an extra CD with interesting bonus tracks.

From this website and others, I know that live recordings are on top of our wish list. Lots of bootlegs are available, but they usually are harder to get and less nice looking. It was a disappointment for many that this boxed set didn’t include some live recordings. But maybe a fourth CD for each boxed set should be made available to hold various live recordings from that time period. Readers of this website might have seen the wish lists for such a CD.

Conclusion: Buy this boxed set: it helps Procol Harum really Shine on Brightly in your stereo.