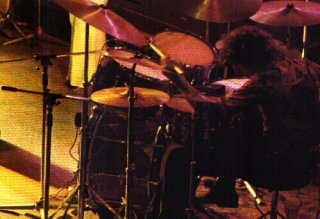 B.J. Wilson, Barrie to friends, joined Procol as A Whiter Shade of Pale dropped from the number one position in July '67. It might have seemed a bad move. Their world wide hit was slipping, Homburg never made the same impact on the charts, and the classic Salty Dog didn't sell.

"I always thought we'd be back at the top some time. But obviously you get black periods. When you have a single like A Salty Dog and nobody wants to buy it, then you feel pretty despondent. I didn't even write that song  but I can imagine how Keith and Gary felt. We've always had a hard core of fans, people who hear a track on the radio and buy a new release as soon as they can. Everybody has those people  they keep you working."

"I like to be rude when I play the drums. Actually I don't think I play all that differently from a lot of drummers I know. I put all the energy I've got into playing."

"When we were a four piece with Robin, the drums and bass had to play a lot more. Now with Alan he actually plays a lot of notes so it leaves me a lot of room."

Talk to Barrie and his favorite drummers are The Band's Levon Helm  "just because he's so incredible"  and Ken Buttrey - "he's just about my favorite rock and roll drummer. The work he did with Bob Dylan was excellent. He plays the way I like to, putting a lot of tension into the rhythm section."

Yet Barrie's drumming has never been orthodox rock and roll. "I still think there's a lot to be said for the rock and roll era. I don't hear people playing now the way they used to. There're a lot of groups that profess to play rock and roll, but they play it in a style that relates to the '70's. To play rock and roll is an art which very few people can handle; that's really why Sha Na Na are so incredible. We've never seen anything like them in England anyway."

With Procol, Barrie has taken on the task of keeping time with an orchestra where each beat has to be time-perfect. With the Edmonton Symphony his timing was perfect, as with the London Symphony. On both occasions it was the classical percussionists who were out a couple of times.

"They have a completely different concept of keeping time. They have no way to relate to Ringo Starr, if you see what I mean? Classical musicians keep perfect time, but they don't understand the off beat. The only way to play with them is to forget them. The hardest part of playing with an orchestra is hearing them; it's hard enough hearing Gary for most of the time, with bass and guitar on either side of me."