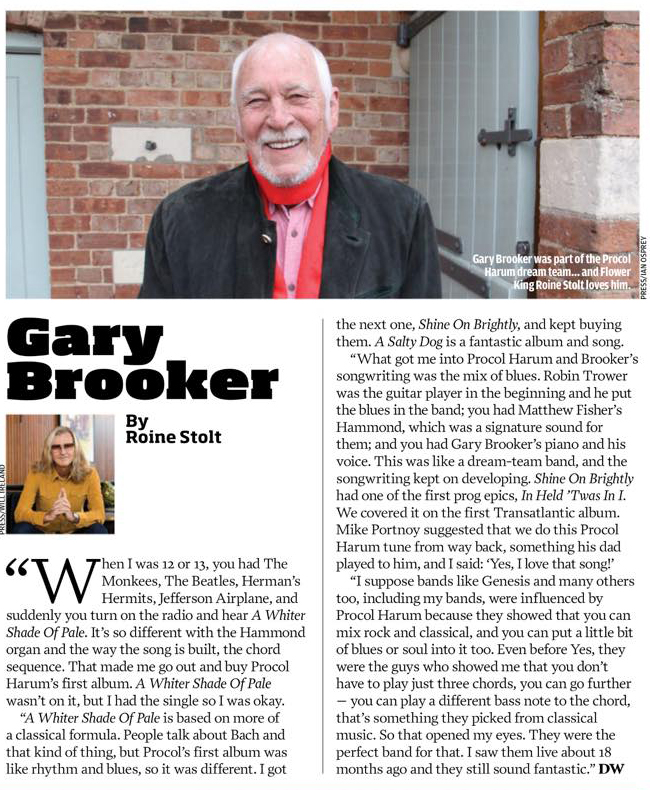 'When I was twelve or thirteen, you had The Monkees, The Beatles, Herman's Hermits, Jefferson Airplane, and suddenly you turn on the radio and hear A Whiter Shade of Pale. It's so different with the Hammond organ and the way the song is built, the chord sequence. That made me go out and buy Procol Harum's first album. A Whiter Shade of Pale wasn't on it, but I had the single so I was okay.

'A Whiter Shade of Pale is based on more of a classical formula. People talk about Bach and that kind of thing, but Procol's first album was like rhythm and blues, so it was different. I got the next one, Shine on Brightly, and kept buying them. A Salty Dog is a fantastic album and song.

'What got me into Procol Harum and Brooker's songwriting was the mix of blues. Robin Trower was the guitar player in the beginning and he put the blues in the band; you had Matthew Fisher's Hammond, which was a signature sound for them; and you had Gary Brooker's piano and his voice. This was like a dream-team band, and the songwriting kept on developing. Shine on Brightly had one of the first prog epics, In Held 'Twas In I. We covered it on the first TransAtlantic album. Mike Portnoy suggested that we do this Procol Harum tune from way back, something his dad played to him, and I said, 'Yes, I love that song'.

'I suppose bands like Genesis and many others too, including my bands, were influenced by Procol Harum because they showed that you can mix rock and classical, and you can put a little bit of blues or soul into it too. Even before Yes, they were the guys who showed me that you don't have to play just three chords, you can go further — you can play a different bass note to the chord, that's something they picked from classical music. So that opened my eyes. They were the perfect band for that. I saw them live about eighteen months ago and they still sound fantastic.'