One of Mick Ronson's all-time favourites

Here's the story about the Mick Ronson memorial concert ...

When Mick Ronson was diagnosed with cancer, he was contracted to tour Scandinavia. His doctors advised against it, but the tour promoter threatened to take legal action. Bill Wyman apparently found out about the situation, and very generously took Willy And The Poorboys over to substitute for Ronson and settle the matter. 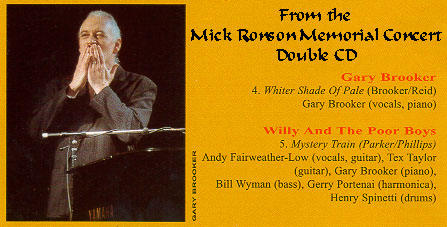 This explains why Willy and The Poorboys were invited to the Mick Ronson Memorial: the programme states, 'In the Autumn of 1992, Bill with Willy and the Poor Boys travelled to Sweden to cover concert appearances Mick Ronson was unable to fulfil due to his illness.' (Halmstad, 31 July 1992 setlist here)

Gary was of course playing with Willy and the Poorboys, and he was asked to play A Whiter Shade Of Pale because the song was one of Mick's all-time favorites.

Although I'm in the States I did manage to get over for the Mick Ronson Memorial Concert, and Gary's song was the highlight of the show for me (save Ian Hunter's set, of course). Still gives me chills ...

Thanks for the above to Justin Purington, who runs the Mott The Hoople website, Just a Buzz Online; you can order the CD with Gary's AWSoP and Willy and the Poor Boys' Mystery Train on it by clicking here.

Incidentally (writes RC) there's not a lot of piano on Willy and the Poor Boys' Mystery Train, but at about 5.49, when Andy F-L's vocal train-noises are winding the song up, Procol cognoscenti will observe that Gary plays the opening two chords of A Salty Dog at the top of the piano ... one more illustration (over and above Last Train to Niagara) of his explanation that it was a locomotive siren that originally gave him that distinctive cluster of notes.