Wording from inside package 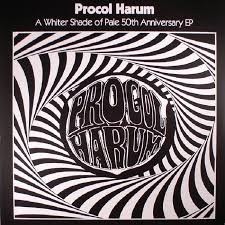 Originally released on 12 May 1967, it entered the British Pop chart at #11 based solely on record sales (‘streaming’ back then was not a term which related to music), seizing the #1 spot two weeks tater on 10 June as it ushered in the fabled Summer of Love. Keeping all contenders at arms [sic] length for a further six weeks it also peaked at #5 in the American Billboard chart in the week of 29 July without the assistance of either a live American concert or national television appearance (like The Ed Sullivan Show, in the days long before MTV, YouTube. iTunes or Spotify etc).

It has featured in umpteen major feature film soundtracks and over one thousand cover versions have been registered over these 50 years, sung in many languages, with a significant number charting around the world too.

How did this epochal pop classic come to pass? During the summer of 1966, pianist and vocalist Gary Brooker had decided to leave Beat / R&B combo THE PARAMOUNTS to concentrate on writing music, and with the guidance of deejay / producer / label manager and all round R&B music enthusiast Guy Stevens, was introduced to wordsmith Keith Reid. Such was their innate connection, Keith gave Gary a batch of his poems to compose accompanying music for.

Amongst the poems in that envelope was A Whiter Shade of Pale, which motivated Gary to record a basic song demo on the Grundig reel tape machine his girlfriend Franky had bought him, which in its original form was almost seven minutes long! Stevens heard the arrangement and booked a demo session with a view to them touting the song to other acts to record and release. In the meantime Keith had found a music publisher willing to take a chance on punting his words, David Platz at Essex Music.

In January 1967 a second demo session with Stevens spawned another version of the song but with no takers stepping forward to record their new songs Gary and Keith set about forming their own band as a vehicle for their songs, placing an advert in the Melody Maker music paper. Having brewed the band name PROCOL HARUM, Gary and Keith recruited David Knights (bass), Matthew Fisher (Hammond Organ) and Ray Royer (guitar).

When Keith played David Platz his acetate of A Whiter Shade of Pale, Platz immediately wrote a letter to Gary stating confidently that they had a hit on their hands and Denny agreed to produce their new group’s inaugural session at OLYMPIC STUDIOS in Barnes, promising to enlist Mitch Mitchell to play drums at the session.

29 March: recording engineer Keith Grant set up the equipment but a heavy night on the tiles precluded Mitch’s attendance and Grant called up Bill Eyden, his mate who drummed for Georgie Fame and Dick Morrissey, and who conveniently lived in Barnes, asking him to come down to Olympic with his kit. After a couple of listens to the demo, Eyden sat behind his kit and the group enthusiastically laid down a few of Keith and Gary’s new compositions including Alpha, Salad Days (are here again) and A Whiter Shade of Pale – which by now had been truncated to omit the second verse. At just over four minutes it would be quite a test to pitch it as an A side amidst the average three minute pop song [sic]. 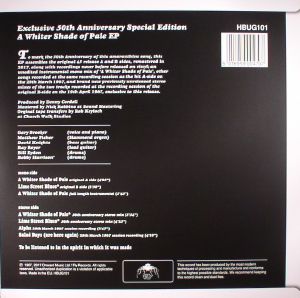 Back in the spring of 1966 David Platz had set up a production company at Essex Music, and had worked with record producer Denny Cordell signing up new acts Beverley (later née [sic] Martyn) and The Move, whilst Cordell continued his own production work with Georgie Fame and The Moody Blues. DECCA Records were one of the two top record labels at the time, EMI being their rival. EMI’s ‘novelty’ imprint PARLOPHONE had just become the coolest record label thanks to the band DECCA had rejected, The Beatles. Promotions manager Tony Hall was not only ‘the man around town’ writing a weekly pop column `MY SCENE’ in the weekly music paper RECORD MIRROR, he was also the promoter for DECCA’s new counterpoint to Parlophone, DERAM Records – which had secured a deal with Essex Music’s production company – had been launched in September 1966 with Beverley’s début disc ‘Happy New Year’ and now PROCOL HARUM signed to Cordell / Platz’s production company. When Hall heard the demo disc of A Whiter Shade of Pale augmented with Matthew Fisher’s supernatural organ arrangement he played it over and over again, and championed it to DERAM for a big splash. But they considered the track was too dreary and too long with Hall declaring them mad and insisting that this was a monster smash, vowing to promote the innovative platter independently.

He took the demo disc to RADIO LONDON (back then a pirate station, BBC Radio One did not exist) who jumped at the chance to air the disc as an exclusive play on Monday 17 April, and within minutes of airing [sic] the station’s switchboard was jammed with enquiries, fuelling Hall’s confidence that this was special.

19 April: Having recruited drummer Bobby Harrison, Denny produced a rerecorded version of A Whiter Shade of Pale at Advision Sound Studio, as well as another new Brooker / Reid song, the super-hot R&B cut Lime Street Blues. DERAM released A Whiter Shade of Pale – the Eyden version – flipped with Lime Street Blues on 12 May 1967 and the faith of all those concerned bore fruit and exceeded everyone’s optimism. It was DERAM Records[‘] first and only #1 hit single, residing at the top spot for six weeks; re-released on FLY Records in 1972, it celebrated its fifth Anniversary on 22 April 1972 peaking at #13 in the UK Singles Charts spending 13 weeks in the charts.

The 40th Anniversary of A White [sic] Shade of Pale was eclipsed by litigation brought by Matthew Fisher, claiming co-authorship, which was sanctioned on 30 July 2009 by the Law Lords in Appellate Committee of the House of Lords.

In 1967 Gary Brooker and Keith Reid steered something very special, which on reflection fifty years later is even more extraordinary. In an era of instant anything anywhere anytime, in less than a year from their first introduction they had formed a band, written, recorded and released a chart topper around the world which remains as loved and listened to as it did [sic] during that Summer of Love.

FLY Records celebrates the 50th Anniversary of this unequalled record with an exclusive and very special limited release as part of the 10th Anniversary celebration of Record Store Day. This edition features a remastered version of the original mono 1967 single A and B sides along with a rare instrumental mono mix of the ‘hit’ which is previously unreleased on vinyl; included also for the first time on vinyl are the other two tracks recorded at the very first Procol Harutn recording session on 29 March; and rounding off this package are brand new full-length stereo mixes of the two tracks recorded on 19 April, which are exclusive to this antiquus novum [sic] release.