Richard Beck, for 'Beyond the Pale'

For three days and three nights the gigantic stage at one end of the dirt racetrack held forth with performances from the likes of Jimi Hendrix, Mountain, BB King, Rare Earth, Ginger Baker's Air Force, The Allman Brothers Band, and scores of others, both famous and obscure, and long forgotten by this writer. But one memory that still remains with me after 28 years is the performance by Procol Harum. What follows is an account based upon a collection of vivid impressions and lasting images that have survived these many years. 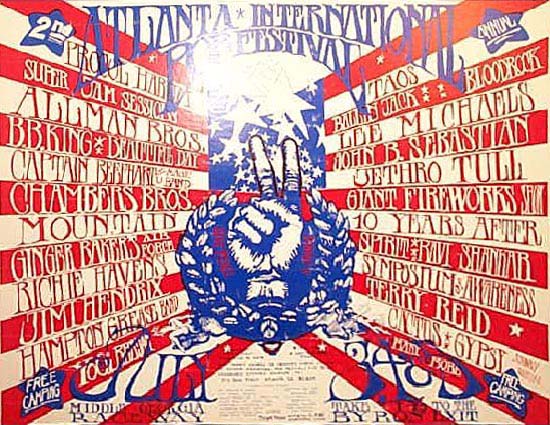 It is hard to say what excited me most about my anticipation of attending this event. Perhaps it was being part of such a massive musical and human cavalcade. Not far on the heels of Woodstock, few people could know that this would be one of the last truly big weekend festivals before the decline of this phenomenon of the great Age of Rock. By now promoters are learning that they can traverse a minefield of logistical and legal problems only to see their investment go up in smoke as they are forced to throw open the gates to disruptive fans demanding free admission. Now with barricades broken, fans and revelers from all over the country begin to pour into the breach.

And so it was that Byron, Georgia, a tiny, rural community ten miles south of Macon, found its Byron Raceway and the surrounding countryside run afloat in a sea of youth counterculture estimated at 600,000 strong. They came, not for the politics, but for the music. They came hoping for another Woodstock in the making. They came for sex, drugs, and Rock and Roll. I had come to see it all. And I had come to see Procol Harum.

We were all in the deep South now. This is the birthplace of Southern Rock. Good Ole Boy music pioneered by the Allman Brothers Band. In years to come, smaller cities like Macon, Augusta and Athens would also spawn the likes of the B-52s and REM. The Governor of Georgia is Lester Maddox, an infamous racist advocate and mental cretin who walked off The Dick Cavett Show in the middle of his interview. Refusing to answer questions about race relations in his state, he couldn't figure out if Cavett's cleverly reworded queries were multi-syllabic ridicule or not. So when it was announced from the stage that the Governor had flown over our heads and declared the site a disaster area, the mocking roar of dissent could have been heard 95 miles away in Atlanta.

Given the same view as they were helicoptered in, one wonders now what went through the minds of Brooker and company as they prepared to present their unique brand of music to an audience of southern Yanks who, in all likelihood, had heard virtually none of their music over the commercial airwaves. But from the spectacle that was to follow later this evening, it is fun to surmise that Procol Harum had come prepared to give us all a gander at one of the best live bands on the planet. And given a prime-time slot between Rare Earth and BB King, they had the cushiest berth available from which to do it.

The summer heat in Georgia, now world-renowned from the 1996 Olympics, was at its peak. At a time before SPF30 sunscreen, this crowd is baked and parched, ready for the cool of the evening when more festival headliners will take the stage. There are people and cars and encampments for miles around.

To venture down a dirt road leading into a wooded area might prove to be a creepy descent into a dark carnival midway of drug hucksters, who, like infomercial hosts, instruct their gathered customers on the proper way to shoot up for the first time. The two-lane highway in front of the raceway grounds is now nothing more than a paved conduit for the 24-hour public transit system. It is a moving sidewalk of cars piled high with hitchers and partying freaks, occasionally interrupted by makeshift ambulances waving signs that read 'OD' while their drivers plead for a right-of-way. But the prevailing atmosphere is peaceful, remarkably accommodating, and in much the same spirit as Woodstock's 'Summer of Love'.

It is Saturday night, and 24 hours since the concert was declared open and free. The gates and fences are all down now and the crowd has swollen to inestimable proportions numbering in the hundreds of thousands. As Procol Harum begins to take the stage, this animated audience is ready for anything.

As we hear the opening chords of music thundering out of a colossal sound system tweaked to perfection, the lights come up to reveal this group of four Brits. The band is in their familiar stage arrangement, but spread far apart on the giant stage. I can see BJ Wilson, slouching behind his wall of cymbals, low in his stool, as Robin Trower emerges from the shadows to take the front of the stage. Though my binoculars I can see him, hair blowing in the warm summer night wind, smiling at Gary Brooker. He is keeping time to the music, swaying from the waist in his trademark bowing fashion.

I don't even remember what song they were playing, and I don't think the crowd cared. They roared their approval while I wondered aloud if they even knew what kind of repertoire they were in for this evening. It didn't seem to matter to the band either. They were playing to a packed house. It seemed to me that they were going to give this crowd the best they had in them. Whisky Train, The Devil Came From Kansas, Still There'll Be More, all washed over an enthusiastic crowd who seemed to appreciate the virtuoso performances of RT and BJW and were now discovering the incredible power of GB's voice as he belted out song after song. All around me I sensed the courteous concentration of the audience as they quietly let the lofty rendition of A Salty Dog carry them away like the seagulls floating above the opening and closing chords.

Something is happening here. Where did this music come from? Forgotten are the soulful rhythms of rock and roll that had kept them on their feet throughout the sets by preceding acts. Now there seemed to be an anticipation of just how far afield this performance would take them. By the time GB started crooning the words 'paling well, after sixteen days' this crowd was cast adrift, only to be swept up again in the wake of the operatic saga of Whaling Stories. Trower's searing guitar solo was ripping my guts out while Chris Copping's organ sound, an appropriately distorted roar, drove this song onward to a dynamic crescendo of 'boiling oil and shrieking steam'. As the dramatic tension finds release in the 'Shalimar the trumpets chorused' verse, the final relief came next in the quiet ending passage of 'those at peace shall see their wake'. The crowd exploded with a show of surprise and approval that matched the resolve of the band to win over this crowd. This was an astonishing moment for me. Worth the price of admission. At that moment, I actually imagined that Procol Harum had handily achieved their rightful immortality as a major force in the evolution of Rock music. But still to come was one more event which I will always remember.

Major Wilson has not had his final say yet. New to my ears is the yet-to-be-released Power Failure. Now well empowered by the energy flowing from a sea of approving voices, Barrie J Wilson lets rip an inspired and crowd-pleasing drum solo. After all, this is still the South, where the show ain't over till you 'give the drummer some'. When the band comes back in with the final rounds of music, there is no power failure. The roar of the crowd is right on cue. Their show of approval eclipsed the canned applause on the original recording. But oh how very right and perfect it is that the applause was added during recording. It will always be an integral element of the song. It is inescapable in concert and the surest tribute to the legacy of BJ Wilson.

I cannot recall how many encores the audience demanded, but they were not going home until they heard the song that made them come to listen. True to their usual format, the band blew the cobwebs from A Whiter Shade of Pale and delivered the coup de grace to this audience.

Rear-Admiral Brooker and his salty crew had navigated their way through the countryside of Georgia, and like General Sherman who conquered Atlanta on his march to the coast, they had delivered the final thrust and conquered the South.

Thanks to Richard Beck, 'an erstwhile rock musician and long-time PH enthusiast from Memphis, Tennessee'!

Sounds like a triumph ... but from the performers' point of view it was very different