Ever since A Whiter Shade of Pale (probably one of the best singles ever made) Procol Harum have been steadily gaining devotees all around the world. With A Salty Dog they return on probably the most satisfying album they've made yet. It's above all heavy – the word could have been invented with Procol in mind – and still with those rolling, soaring Gary Brooker / Keith Reid songs, with those strange lyrics which taken cold are meaningless but taken in the context of the songs still convey a whole world of atmosphere and feeling. The title track is perfection, and the others don't fall far short. 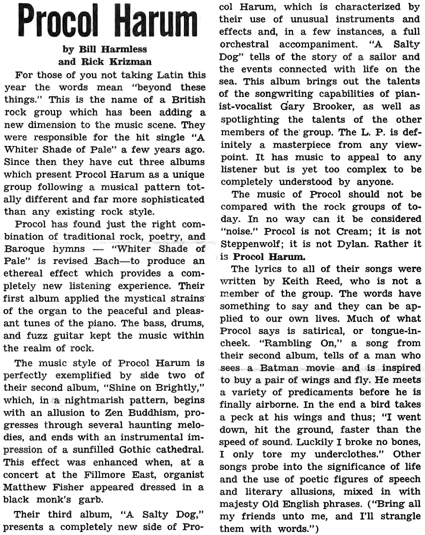 For those of you not taking Latin this year the words mean [sic] ‘beyond these things.’ This is the name of a British rock group which has been adding a new dimension to the music scene. They were responsible for the hit single A Whiter Shade of Pale a few years ago. Since then they have cut three albums which present Procol Harum as a unique group following a musical pattern totally different and far more sophisticated than any existing rock style.

Procol has found just the right combination of traditional rock, poetry, and Baroque hymns — Whiter Shade of Pale is revised Bach—to produce an ethereal effect which provides a completely new listening experience. Their first album applied the mystical strains of the organ to the peaceful and pleasant tunes of the piano. The bass, drums, and fuzz guitar kept the music within the realm of rock.

The music style of Procol Harum is perfectly exemplified by side two of their second album, Shine on Brightly, which, in a nightmarish pattern, begins with an allusion to Zen Buddhism, progresses through several haunting melodies, and ends with an instrumental impression of a sun-filled Gothic cathedral. This effect was enhanced when, at a concert at the Fillmore East, organist Matthew Fisher appeared dressed in a black monk's garb.

Their third album, A Salty Dog, presents a completely new side of Procol Harum, which is characterized by their use of unusual instruments and effects and, in a few instances, a full orchestral accompaniment. A Salty Dog tells of the story of a sailor and the events connected with life on the sea. This album brings out the talents of the song-writing capabilities of pianist-vocalist Gary Brooker, as well as spotlighting the talents of the other members of the group. The LP is definitely a masterpiece from any viewpoint. It has music to appeal to any listener but is yet too complex to be completely understood by anyone.

The music of Procol should not be compared with the rock groups of today. In no way can it be considered ‘noise’. Procol is not Cream; it is not Steppenwolf; it is not Dylan. Rather it is Procol Harum.

The lyrics to all of their songs were written by Keith Reed [sic], who is not a member of the group. The words have something to say and they can be applied to our own lives. Much of what Procol says is satirical, or tongue-in-cheek. Rambling On, a song from their second album, tells of a man who sees a Batman movie and is inspired to buy a pair of wings and fly. He meets a variety of predicaments before he is finally airborne. In the end a bird takes a peck at his wings and thus; ‘I went down, hit the ground, faster than the speed of sound. Luckily I broke no bones, I only tore my underclothes.’ Other songs probe into the significance of life and the use of poetic figures of speech and literary allusions, mixed in with majesty Old English phrases. (‘Bring all my friends unto me, and I'll strangle them with words.’)