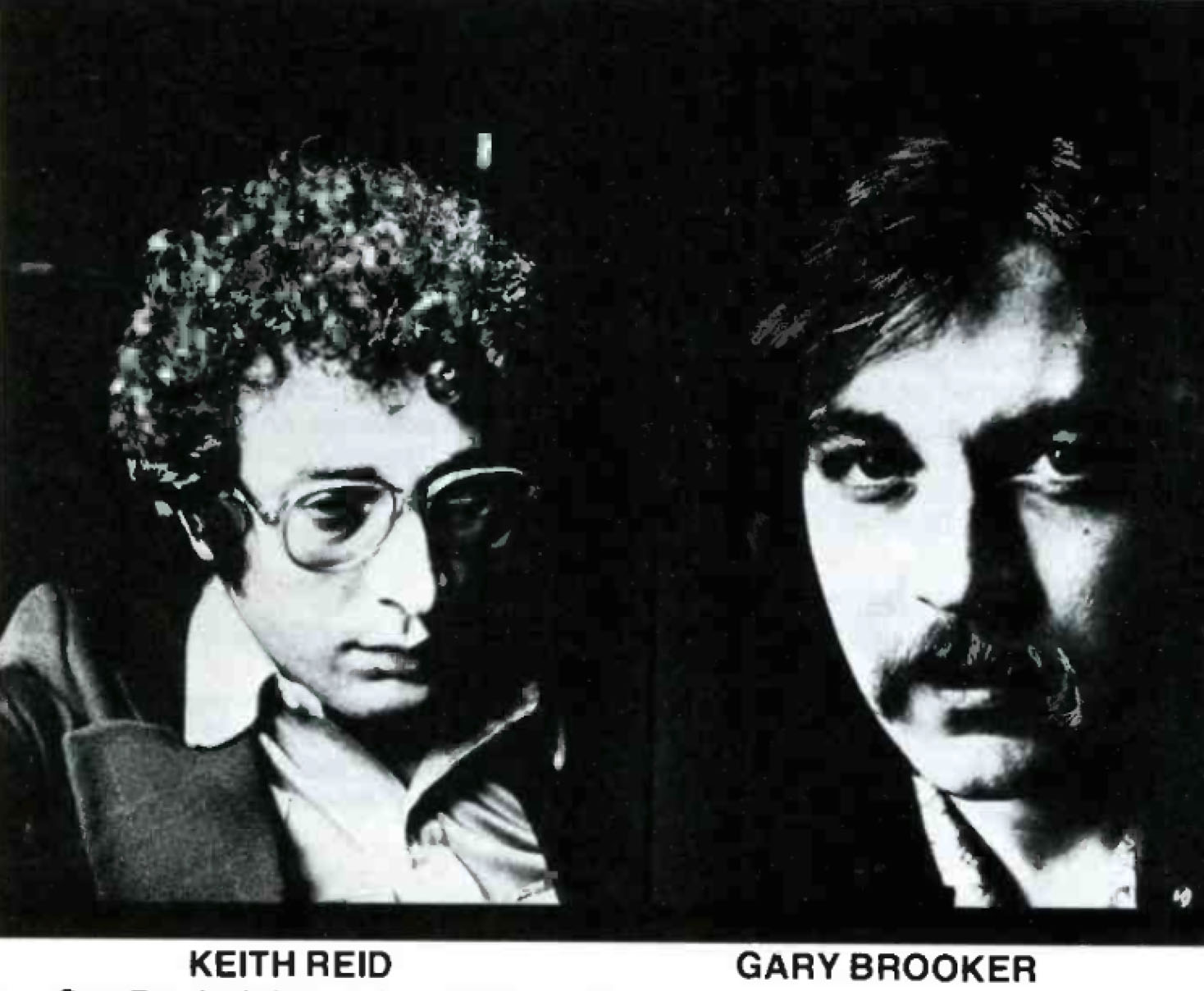 Procol Harum first came to the attention of the American public round about 1967 when a strange. classically oriented single, A Whiter Shade of Pale, was released for the American consumer. Although no other disk of its kind had ever reached the ears of pop listeners, and the times were filled with "British Invasion" groups the likes of Freddie and The Dreamers, The Searchers, The Dave Clark Five, The Hollies and others, A Whiter Shade of Pale skyrocketed to the top of every American pop chart and introduced the American audience to the incredible songwriting talents of Gary Brooker and Keith Reid, a double barrelled words and music team that was to, over the next seven years, come gloriously across with song after magnificent song. Needless to say, the Procol Harum group has taken that very material and through hit LP after hit LP become one of the most popular British groups to ever come across to America.

The Plaza Hotel is the epitome of the Grand Hotel image Gary and Keith captured on their last Chrysalis LP, Grand Hotel and, considering the conservative, very British nature of the duo, they fit right into the splendor of it all. Our interview, on a steamy New York pre-summer afternoon, followed a Procol Harum concert of the night before and preceded a Harum concert that evening and Gary and Keith were in high spirits concerning those New York City performances at the Felt Forum. In fact. Gary and Keith both admitted to me that New York was always a favorite stop on the group's tours. New York audiences, Gary related, always seem to request songs other areas don't and seem to be so much more into the group over the course of their career than most other markets, many of which first became aware of Procol Harum around the time of the group's ‘live’ album and the resulting hit single, Conquistador (a single which probably did as much for the group in their middle period as A Whiter Shade of Pale did for them initially). The group's stage act naturally reflects that newer material since Conquistador but, the New York performance always has included in it material from the earlier Harum period that audiences look for when attending a performance.

Keith Reid is the words half of the words and music team and to read his lyrics apart from Gary Brooker's intensely created music is as close to spending an evening with a fine bottle of wine and a rare book of poetry as one can attain when analysing any form of pop music today. His sensitivity as a writer, coupled with his awareness of his surroundings has much to do with that resulting lyrical splendor. Keith noted to me that since his association with the group was writing and not performing, his presence at Procol Harum's concerts was more of an educated observer and a position that has inspired him in the past to write many a Harum tune. In fact, he mentioned to me that his most recent inspiration was based on the rigors of touring with the group and moving from hotel to hotel and from city to city, an act that most groups find, and rightfully so, the least inviting portion of any tour. When the group is performing on stage, Keith finds himself moving about either backstage or right in the audience, always listening. always watching people's reactions to the group's music on stage. Keith Reid is a fascinating individual in that, considering the group's successes over the years, he has always managed to maintain his equilibrium throughout and remain as pleasant an individual as he is.

Gary Brooker, as a musician, is as near a genius performer and writer as any pop musician around today. His work behind the grand piano is as impressive as it is entertaining and most audiences marvel at his expertise. Of the many performers I have interviewed in the past, Brooker is one of the few who actually enjoys going on the road to perform with Procol Harum.

The group's latest Chrysalis LP, Exotic Birds and Fruit is a chart album thus far without the presence of a hit single. That first single, released this week, is Nothing But the Truth an excellent Harum track, and Gary and Keith's choice for the initial LP single. Both believe that the singles market is very important to the future of the group and they hope to have another smash with Nothing But the Truth. If you have not as yet experienced a Procol Harum concert or album, I sincerely urge you to let yourself be treated to both. Procol Harum is by far the most intelligent (and first class all the way) band in contemporary pop music. Gary Brooker and Keith Reid are the two vital men that make it all work and, judging by what I've heard in the past and present, are doing their jobs to their fullest extent. I thank them both for many hours of exciting entertainment and here's hoping there'll be many more.

(thanks, Paul Wolfe, for the scan)