Interview Between Guest Disk Jockey 'Number Six' and Matthew Fisher – uclaradio.com Procol Harum Marathon #2 – 14 October 2001, here presented in two episodes, of which this is the first. Of course we have compressed the sound clips to aid downloading … the original broadcast quality was impeccable.

Matthew, I want to thank you very much for agreeing to be on the show. You really have contributed the original and brilliant signature sound to Procol Harum, that is, of the majestic Hammond organ, a sound that has often been copied or mimicked. How did you get involved with this instrument and who were your early influences?

Matthew Fisher
Well, it was one of those things that I’d always wanted to get. I mean it was, ooh, years ago before then, I mean when I was about ten or eleven I used to watch television and see people like Jerry Allen playing a Hammond organ and I was just absolutely ... I was just fascinated by the look of the thing. They used it a lot. When we had our version of what you would have called the $64,000 question or something ... In England obviously it was pounds instead of dollars, but it was the same sort of deal. You know in those early days of radio and television, often an electric organ was used for music. This guy Jerry Allen really had the whole scene sewn up. He was on hundreds of programmes supplying background music. No, I’ve always been fascinated by organs of various different kinds. As a kid I went to see 20,000 Leagues under the Sea with James Mason playing Captain Nemo.

That was that old Disney Movie I think, isn’t it?

Yeah, I remember that.

That made a huge impression on me. I think it may be originally it was the idea that a piano only had one keyboard but when you had an organ you had two or three. And I thought, wow – that’s amazing, all these different keyboards. But it was later, I mean, I suppose, now 1960, and I subsequently when I really got into Hammond organ by hearing records like You Can’t Sit Down ... you know the Phil Upchurch classic; oh, and then Jimmy Smith and people like that and Booker T and the MG’s. And really, I mean, if anything that was sort of the sound I used on Whiter Shade of Pale ... was kind of the sort of sound I would use when I was playing Booker T stuff like Green Onions. I mean I was just using that sort of Booker T sound, but to play kind of Bach–type phrases. I mean, that was really the idea of it.

I see. Do you use the same instrumental gear now on the Hammond compared to what you did in the early days of Procol Harum or have things evolved?

Well only in that I’ve ... I've transferred my allegiance if you like. I mean, in the early days I just bought a small Hammond, an M100, because that was really all one could afford in those days. And I remember in those days, sometimes when I came to America I had to play one of the larger ones, you know, and I didn’t really like it very much. But over the years I’ve kind of got to prefer the bigger, you know the B3s and C3s and really that’s all I play now. I’d probably be quite disgusted if I had to play an M100 now.

You were with Procol Harum really very early in the game and helping to give it this unique sound and then left the band for quite a while and rejoined in 1991 with the reunion and have been playing on recent tours. How is Procol Harum the second time around and what had changed when you kind of came back in 1991? 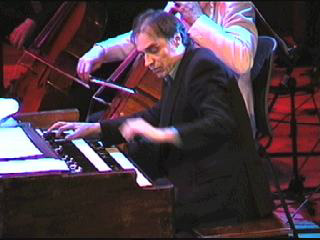 Oh, I think everything had changed, really. But most of all, I had. I mean, the thing is the first time around, I wasn’t even that sure I really wanted to play in a band, anymore. I had been a musician but I was really more interested in recording. I was more interested in getting into production and things like that; working in studios – I just loved being in recording studios. To me, going out on the road was sort of an interruption from that, and I didn’t really enjoy it. But I mean, after you know having had twenty-five years or so of working in studios, eventually I got quite sick of it. And the whole process of recording, where everything’s got to be perfect and everything’s got to be polished and neatly put in place, you know, and I found after all that, that just going out and having a good old blow on stage you know was a really welcome change. So I think, more than anything, I would say that my attitude to playing on stage has changed an awful lot. So that’s the big difference, as far as I’m concerned.

Was it hard going solo when you left the band and came out with your solo albums? What were the major differences there compared to when you were playing with Procol Harum?

Well, I was never really committed to having a solo career, if you like, you know. It was just, I liked making records; I liked being in the studio. And I mean quite frankly one needs money to live. It was explained to me, that well, you’ve been in a successful band. We could get a recording deal, so how about it? Well okay, I wouldn’t mind making a couple of albums. But that was really ... in a way, that can give the wrong impression. I’m not saying that I wasn’t into making those records, I was. But, it was just ... that was it. I just wanted to make the records. I just wanted to go in the studio and experiment and do that sort of stuff. I was not, kind of, trying to build a career as a solo artist. I had no dreams of going out on tour or appearing on television or becoming famous or anything like that. I was just interested in going to the studio and seeing what I could do, you know.

And you came out with some very nice albums, too. And we’re going to feature some of those on Sunday.

What do you see now as the future for Procol Harum?

Well, I think I’m the wrong person to ask, here. I mean, I suppose that one of the changes that has happened is that we no longer, kind of ... we’re not the same sort of band as we used to be. We obviously were a band of young kids that were very ambitious and wanted to make some noise and do things. It’s just not that feeling anymore. It’s more just that we like ... we enjoy playing together, you know. And it’s very much a question, of well, you know people if they want us to appear somewhere, they probably find some way of contacting Gary or his management and then it filters down the line and someone says well we’ve had some offers for a gig, you know, can you do it? And if I’m available, I say yes. So, it’s really all down to Gary. If Gary wants to take it to another level, well fine, and I’d go along with that, but - it is really down to him. I don’t really have that kind of control or anything.

You had some very successful recent Eastern European tours and this concert in Manchester and I guess, Hell, is?

Was that what you expected? How were the crowds? How was the reception?

It was good. I always find it a little bit of a surprise because, I mean, let's face it ... it was a long time ago. And it’s also a surprise when we do gigs, how young a lot of the audience are. And I sort of wonder, well, did they wander into the wrong gig by mistake or something? Do they realize who it is that they are going to see?

But that must be nice to know that there is a new generation out there who’s interested. For example, we got some wonderful e-mail responses from this last Procol Harum marathon that we had, playing out of UCLA radio station. We got some great e-mails. People really love the music.

Yeah, well, I guess ... The thing is, we just do what we always did, you know. And, I suppose that kind of makes it rare in a way, because, a lot of the things that have come out since then ... it’s just a different genre. you know, a different game with different rules but we’re still playing the old game with our rules; and it’s great to find that there are people that want to go and hear something a little bit different.

I think that actually your music has influenced so many groups. Even some of the newer groups. Some of the groups that I like recently for example: Crowded House, Radiohead. There is this sort of sense that some of the work from that perhaps was derived originally from your work.

Well, it’s funny. Because I mean some (unfortunately I can’t remember the guy’s name) but some guy very kindly sent me a Crowded House - I think it was a compilation album. And said, have you heard this because this guy sounds just like you? I listened to it and I thought – yeah, he does, doesn’t he! I liked it. I really liked what he was doing, you know; but I could still sort of feel that, yeah, that is the sort of thing that I’d do, you know.

Well that is a great compliment, really.