Mark Lundquist, then and now

Beside Gary Brooker there are a few others I "love" and "follow" since the 60s: Zoot Money, Alan Price, Kevin Coyne, Kevin Ayers, the late Tony Ashton, Neil Innes and of course Cliff Bennett (pictured below).

I saw Cliff first as one of the warm up groups in 1965 on the 'Bravo-Beatles-Blitz-Tour' in Essen on the very day when Paul McCartney came into his dressing room to play for him on guitar Got to get you into my life. He said that he wrote that specially for him and the Rebel Rousers. You know the rest !

I loved the group and Cliff's voice from this first meeting, So I never lost interest in his activities (for instance Shanghai with Mick (?) Green (known from the Pirates) or Toe Fat (great group). Later he reformed the Rebel Rousers, and the above photograph was taken in September 1989 when Cliff and the Band were invited to play a private gig in Hamburg. Mark Lundquist played lead guitar with the Rebel Rousers from 1988 to 1998; he's been a musician since he was fifteen, and decided to concentrate on his promotional activities in 1998. The picture shows Mark next to Mark Brzezicki, backstage in Poland, 2001 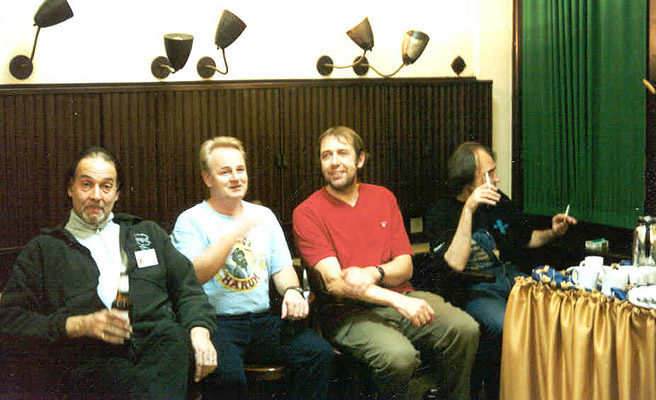 So it was quite funny to remember the thirteen-year-old picture above, when I last saw Mark at the "Wintershall" concert by the Lake in the summer of 2001. I went to England in February 2002 to see two concerts of the 'Best of British R&B-Tour': Zoot Money, Georgie Fame, the Animals and Cliff Bennett & The Rebel Rousers. Isn't that great?

It seems to me that the old "package-tours", as we remember them from the good old days, are coming back