Procol and the night the music fused

For once it all begins to ring true – all those ecstatic pronouncements about ‘the fusion of rock and classics’ or is it ‘the merging of two contrasting musical styles’?

You can judge yourself on 7 April when Procol Harum in Concert with the Edmonton Symphony Orchestra is released. Gary Brooker, the group’s pianist and composer, took up an invitation from Bob Hunka, the orchestra's general manager,  and on 18 November last year it all came to pass – but only just – at Edmonton University’s Jubilee Hall. There were the usual problems from clock-watching union officials and from Customs men who decided to investigate the innards of the group's equipment.

It meant a series of rushed note rehearsals the day before the concert – with the orchestra and the Da Camera singers – and a hurried full-scale practice the day of the show.

Brooker, unbelievably mellow and matter-of-fact when we talked last week, was reportedly wringing his hands and perspiring at the time. There was so much that could have gone wrong, he said. 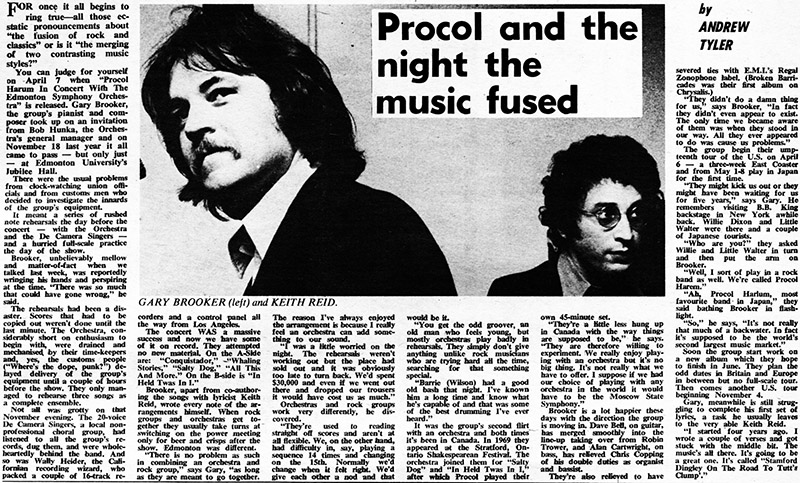 The rehearsals had been a disaster. Scores that had to be copied out weren't done until the last minute. The orchestra, considerably short on enthusiasm to begin with, were drained and mechanised by their timekeepers and, yes, the Customs people (‘Where’s the dope, punk?’) delayed delivery of the group's equipment until a couple of hours before the show. They only managed to rehearse three songs as a complete ensemble.

Not all was grotty on that November evening. The twenty voice Da Camera singers, a local non-professional choral group, had listened to all the group’s records, and dug them, and were wholeheartedly behind the band. And so was Wally Heider, the Californian recording wizard, who packed a couple of sixteen-track recorders and a control panel all the way from Los Angeles.

The concert was a massive success and now we have some of it on record. They attempted no new material. On the A-side are: Conquistador, Whaling Stories, A Salty Dog, All This and More. On the B-side is In Held ’Twas in I.

Brooker, apart from co-authoring the songs with lyricist Keith Reid, wrote every note of the arrangements himself. When rock groups and orchestras get together they usually take turns switching on the power, meeting only for beer and crisps after the show. Edmonton was different.

‘There is no problem as such in combining an orchestra and rock group,’ says Gary, ‘as long as they are meant to go together. The reason I've always enjoyed the arrangement is because I really feel an orchestra can add something to our sound.’

‘I was a little worried on the night. The rehearsals weren't working out but the place had sold out and it was obviously too late to turn back. We'd spent 30,000 dollars, and even if we went out there and dropped our trousers it would have cost us as much.’

Orchestra and rock groups work very differently, he discovered. ‘They're used to reading straight off scores and aren't at all flexible. We, on the other hand, had difficulty in, say, playing a sequence fourteen times and changing on the fifteenth. Normally we'd change when it felt right. We give each other a nod and that would be it.

'You get the older groover, an old man who feels young, but mostly orchestras play badly in rehearsals. They simply don't give anything, unlike rock musicians who are trying hard all the time, searching for that something special.

Barrie Wilson had a good old bash that night. I've known him a long time and know what he's capable of, and that was some of the best drumming I've ever heard.’

It was the group's second flirt with an orchestra, and both times it's been in Canada. In 1969 they appeared at Stratford, Ontario’s Shakespearean Festival. The orchestra joined them for A Salty Dog and In Held ’Twas in I, after which Procol played their own forty-five minute set.

‘They are a little less hung-up in Canada with the way things are supposed to be. They are therefore willing to experiment. We really enjoy playing with an orchestra but it's no big thing. It's not really what we have to offer. I suppose if we had our choice of playing with any orchestra in the world it would have to be the Moscow State Symphony.

Brooker is a lot happier these days with the direction the group is moving in. Dave Bell [sic], on guitar, has merged smoothly into the line-up taking over from Robin Trower, and Alan Cartwright, on bass, has relieved Chris Copping of his double duties as organist and bassist.

There also relieved to have severed ties with EMI's Regal Zonophone label. (Broken Barricades was their first album on Chrysalis.)

‘They didn't do a damn thing for us,’ says Brooker. ‘In fact they didn't even appear to exist. The only time we became aware of them was when they stood in our way. All they ever appeared to do was cause us problems.’

The group began their umpteenth tour of the US on April 6 – a three-week East-coaster,  and from May 1--8 play in Japan for the first time.

‘They might kick us out, or they might have been waiting for us for five years,’ says Gary. He remembers visiting BB King backstage in New York a while back. Willie Dixon and Little Walter were there, and a couple of Japanese tourists.

‘Who are you?’ they asked Willie and Little Walter in turn, and then put the arm on Brooker. ‘Well, I sort of play in a rock band as well. We’re called Procol Harum.’ ‘Aah, Procol Harlum, most favourite band in Japan,’ they said, bathing Brooker in flashlight.

‘So,’ he says, ‘it's not really that much of a backwater. In fact it's supposed to be the world's second-largest music market.’

Soon the group start work on a new album, which they hope to finish in June. They planned the odd dates in Britain and Europe in between, but no full-scale tour. Then comes another US tour beginning 4 November.

Gary, meanwhile is still struggling to complete his first set of lyrics, a task he usually leaves to the very able Keith Reid.

‘I started four years ago. I wrote a couple of verses and got stuck with the middle bit. The music is all there. It's going to be a great one. It's called Stamford Dingley on the Road to Tutt’s Clump.’